Here's a picture of us with all of our titles. pic.twitter.com/RKcxzKcAFd

And while the Young Bucks have lost titles before (and will no doubt win more again), this marked a very unique time in the world of professional wrestling. It’s now been the first time in almost two years that the Young Bucks have not held a major championship, and only months removed from when they held three major titles.

As members of the Bullet Club – and more importantly the ruling head of the Club, The Elite, alongside Kenny Omega – The Young Bucks are a big part of NJPW’s storylines. They were in the midst of their 5th reign as IWGP Junior Heavyweight Tag Team Champions when they entered Wrestle Kingdom 11 this past January when they faced off against Roppongi Vice (Rocky Romero and Trent Beretta). They entered WK11 as the holders of four titles – their IWPG Junior Heavyweight Tag Team titles, plus the ROH and PWG World Tag Team Champions. But they also introduced their very own custom titles, The Super Kick Party Championship. Their outfits for the show, brashly showing off the gold and hardware they’d acquired the past year, became the stuff of legend. But things would not work out for the Bucks, despite the greatness their wardrobe boasted of, and Roppongi Vice would leave the Tokyo Dome with their third IWGP Junior Heavyweight Championship, and the Bucks down to just three titles remaining.

Last year, The Young Bucks added to their hardware collection with their second reign as ROH World Tag Team Champions when they took part in many fans’ match of the year, Ladder War 6 at All-Star Extravaganza VIII, between the ROH World Tag Team Champions The Addiction (Christopher Daniels & Frankie Kazarian), The Young Bucks and The Motor City Machine Guns (Alex Shelley & Chris Sabin). An absolute classic, these three teams put their blood on the line in one of the greatest ladder matches in the history of the industry. But the Bucks’ reign as champs was cut short at 155 days, when the Broken Hardys (Broken Matt Hardy & ‘Nefarious Brother Nero’ Jeff Hardy) arrived in Ring of Honor from Impact Wrestling and beat the Young Bucks – as well as Roppongi Vice, in a Triple Threat Match – removing another set of titles from around their waists. To add insult to injury, the Hardys also walked off with the Bucks’ own Super Kick Party Championship belts, to add to the Hardy’s own Expedition of Gold.

But at least they still had their PWG World Tag Team titles, right? This was their fourth reign as Tag Team Champion, and the prior three had all been length reigns of dominance: their first reign was an astounding 616 days, their second 245 days and their third 561 days. These guys were the personification of dominance in the PWG tag team division. So it was a shock heard around the world when the Lucha Brothers, hot off their “defection” from Lucha Underground earlier in the year, defeated not only the Young Bucks, but former IWGP Junior Heavyweight Tag Team Champions Ricochet and Matt Sydal in a Triple Threat this past Saturday night to win the PWG World Tag Team titles, erasing all major gold around the Jackson brothers waists.

And so the Young Bucks now venture into unchartered territory. For nearly two years, the Young Bucks have conquered PWG, and for the past year, NJPW and ROH as well. And now their waists are naked and beltless. But in the end, this just means we’ll get to see a new Young Bucks, a hungry Young Bucks, a more determined Young Bucks to prove that they are still World Champion material and still able to bring the Super Kick Party when the time is right.

But despite their obvious sadness at losing the last of their hardware, at least their friend CM Punk managed to solace them and put it all in perspective.

You guys are number one in my heart. And merch sales. That's all that really matters. https://t.co/nXIo7lhMDz 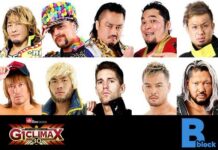