The Kansas City Chiefs 2021 schedule is officially here, which means it’s time for a schedule breakdown. We already knew who Kansas City would play in 2021, but now we know the dates and times of each matchup. The Chiefs are the team to beat in the AFC, but which opponents will give them the hardest fight throughout the season.

The Kansas City Chiefs are the favorite to win the AFC, but the Baltimore Ravens are right there behind them. Baltimore has been one of the NFL’s most dangerous teams since Lamar Jackson took over, and the Ravens just had a fantastic offseason. While they did bid farewell to Orlando Brown, they made up for it by adding several new weapons to the passing game. This should be a dangerous team, and this matchup will be must-watch television. 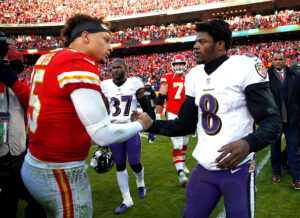 The Green Bay Packers are the second-hardest fight of the season if Aaron Rodgers is their quarterback. The three-time NFL MVP is reportedly demanding a trade and refuses to play for the organization ever again. If Rodgers goes through on this threat, then Green Bay goes from one of the NFL’s top competitors to a below-average unit. It’s impossible to accurately rate the difficulty of this game when Rodgers is such a big unknown.

Josh Allen had a career year last year, and I am expecting him to come back to Earth. This isn’t to say he won’t be good, just that he won’t be playing at an MVP level. This will make this matchup a bit easier, but the Buffalo Bills still have one of the best rosters in football. Kansas City took care of business against this team in the playoffs, but Chiefs fans should know that doesn’t guarantee future success. After all, just look at Kansas City’s regular season and Super Bowl matchup against the Tampa Bay Buccaneers.

Dak Prescott is reportedly well on the road to recovery and is expected to be at full strength for the start of the season. Because of this, we can assume that Prescott will be at the peak of his powers in this Chiefs schedule breakdown. Prescott and the Cowboys are one of the few teams capable of going blow-for-blow with Kansas City, while their defense should be better than it was a season ago.

Justin Herbert looked every bit the part of a franchise quarterback last year and should be even better with a full season under his belt. Combine this with an improved offensive line, a great draft, and the return to health of several defensive difference-makers, and the Chargers are looking like one of the best teams in the league. Los Angeles probably won’t be ready to challenge Kansas City for the division, but they’re going to put up one hell of a fight on their own turf.

When looking at pure talent and talent alone, there is a case to be made that the Cleveland Browns have a top-five roster in football. Baker Mayfield played exceptionally well down the stretch last year, and he keeps it up, he could make me look foolish for this low ranking. 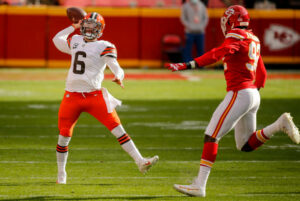 Speaking of talented rosters, the Washington Football Team quietly has built a fantastic team with no real solution at quarterback. The defense is elite, the offensive line is solid, and the weapons are great. If Ryan Fitzpatrick can play at the same good-but-not-great level he did in Miami, then Washington should be one of the better teams in the league.

We already talked about how good the Chargers are, and they should be able to give Kansas City a good fight on their home turf. However, the loud crowds at Arrowhead will make this an easier battle for the Chiefs compared to the road matchup.

A bad quarterback with a terrible offensive line is a recipe for offensive disaster, and that’s exactly what the Pittsburgh Steelers are dealing with in 2021. Ben Roethlisberger simply doesn’t have it anymore, and Pittsburgh’s offensive line looks like it could be the worst in the league. They still have a great defensive core, but you need to score points to win, and it’s hard to see the Steelers finding much of a way to do that.

Once again, this Chiefs schedule breakdown assumes that Aaron Rodgers is not the starting quarterback for the Denver Broncos. If he is, you can bring this matchup up into the top three. The Broncos have a fantastic receiving core and a good-enough offensive line and defense. The real weakness here is quarterback, as Drew Lock spent the majority of 2020 actively sabotaging his team. Ditto for Teddy Bridgewater, as the conservative passer was the primary reason Carolina finished with a top-eight pick.

Denver represents something of a tier break, as they are the last team on Kansas City’s schedule with a realistic shot of pulling an upset. Because of this, they’re back-to-back in this ranking. While the Chiefs should comfortably take care of business in this one, there is a possibility that Denver gets hots and pulls out a victory.

The Tennessee Titans got a lot worse over the past few months. Ryan Tannehill has played some incredible football since taking over for Marcus Mariota, but he’ll have a hard time moving the ball through the air with A.J. Brown as his only weapon of note. Derrick Henry is great, but a running back cannot carry an offense in today’s NFL without a good passing attack – look at how he performed with Mariota under center. Tennessee’s already-bad defense lost their top cornerbacks from a season ago and they just traded their 2020 first-round pick for essentially nothing. Their window is closed, and Kansas City should have no trouble beating this team.

The Raiders gave the Chiefs a good fight in both of their matchups last year, but the 2020 version of the Raiders is much better than the 2021 iteration of the team. Over the past few months, Las Vegas gutted their offensive line, lost their top receiver, and had the worst draft class of anyone in the league. Their big offseason investment was in a backup running back, which is never a good sign.

Jalen Hurts was a fun change of pace last year, but he really struggled as a passer. Unless he makes a massive leap, this offense will probably be very hard to watch, even with a decent receiving corps. The defense won’t be that good, and Kansas City should blow the doors off of Philadelphia in this one.

Joe Burrow had some flashes as a rookie, but he’s no guarantee to be the long-term answer under center. Quarterbacks coming off of ACL injuries tend to struggle in their first season back, and Cincinnati hasn’t done enough to fix their defense. Additionally, I have seen enough from Zac Taylor to know that he is not the long-term solution at head coach.

The Giants are trying to build a better team, but it’s hard that vision coming to fruition with Dave Gettlemen and Daniel Jones as the key figures behind the rebuild. Jones has largely looked lost since joining the NFL, while Gettlemen has never escaped his old-school mentality of team-building. Even with Kenny Golladay in town, this will still be a bad offense with an average defense. Kansas City eats teams like this for breakfast, and this one could get ugly early.

You never want to put a divisional foe last on a list like this, but the Raiders make it impossible not to. Even with a solid quarterback in Derek Carr, the only thing I see this team competing for is the first-overall pick in the 2022 NFL Draft.