Drew Lock’s progress is paying off for the Denver Broncos. As most analysts expected, he has learned from his past mistakes and is finally getting into his own groove. Previously showing flashes of brilliance in a quarter of each game, he finally played a complete game that demonstrated what he is capable of when given a chance. If he keeps playing the way he did Sunday, the future is looking good.

Drew Lock’s Progress Is Paying Off For The Denver Broncos

Some went as far as to say he was “basically perfect” against the Carolina Panthers. The Broncos like his arm, mobility, and his propensity to learn from his mistakes. That is not possible for some.

Pat Shurmur designed an offense that is perfect for Lock. Running the ball and throwing short passes seems to be the key. Lock had been the least accurate quarterback in the league, but with this scheme, completed 12-16 passes in the first half. 75 percent.

Rich Kurtzman of Mile High Sports said Lock “looked like a star.” And that star quality was even more evident in the second half. It turns out that Lock has the ability to roll himself out of the pocket, which he did at least three times. First rolling to the right for a complete pass to Jerry Jeudy, another to Tony Fumagalli before Lock was hit for a first down. Later, he rolled left, finding Tim Patrick for the game-winner.

He finished 21-27 for 280 yards and four touchdowns. 77.8 completion percentage is the second-best of his career and it shows he can play at an elite level. Lock’s efficiency rating skyrocketed as seen in this graph. Not long ago, he was all the way to the left. 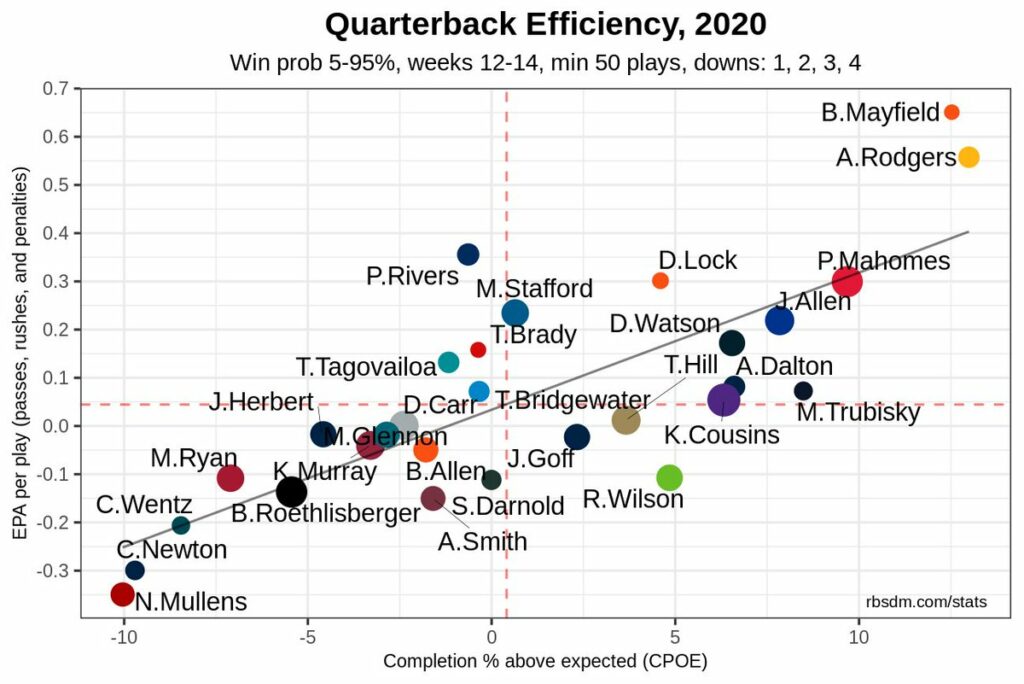 Deep throws were the theme of the game. Lock connected with rookie KJ Hamler for deep touchdowns. Both throws were smooth and floated exactly the right way. Hamler’s speed has really been a bright spot in an otherwise dreary season; he’s proven to be quite the dark horse and is someone Lock can rely on in future.

Jeudy was a huge part of another explosive play by Lock. A deep corner route for 31 yards helped him feel needed. Lock hasn’t been throwing to him for most of the season; Jeudy was verbal about feeling redundant. This is a good sign for the on-field relationship between Lock and Jeudy. If they keep this up, it can only mean good things for the team.

Lock was controlled and precise. Unlike previous weeks, he didn’t attempt anything too flashy and then fail at doing so. 21-27 for 280 yards and four touchdowns, 10.4 yards per attempt, zero interceptions. The Broncos need this production from Lock every week. His passer rating was the best of his 15-game career. 149.5 – almost perfect.

His confidence is building, even his footwork is impressive – he’s steady of his feet when throwing the deep balls. Overall, when this guy is confident, the offense feeds off of it. Everyone benefits from an improved performance from their quarterback.