The New York Rangers are among the top teams in the league near the midway point of the 2021-22 NHL season. Part of that has to do with Chris Kreider and his success on the power play. The Boxford, Mass. native has already surpassed his season-high in extra-man goals with 12 after getting 11 last season. Kreider is tied for fourth in the league scoring race with Auston Matthews and Troy Terry.

The 30-year-old has given the Rangers to be in the running for the President’s Trophy. New York comes into Thursday’s games with a 25-percent success rate on the power-play. That’s good enough for seventh going into the game against the Vegas Golden Knights. Much of that is owed to Kreider and we look into his contributions on the man-up.

Kreider doesn’t grab the headlines like teammates Mika Zibanejad or Artemi Panarin. However, he’s played a large hand for the Rangers over his last decade with the team. His power-play goal totals have gone up since the 2019-20 season when he got nine.

He got his career last season with 11 in 50 games, but he’s already eclipsed that in 34 games this season. Kreider often plays on the first power-play unit with Zibanejad, Panarin and Adam Fox. That trio is known for being good shooters with Fox’s point-shot one that can cause plenty of problems for opponents.

His power-play success has already helped him reach the 20-goal mark for the fourth straight season. Kreider has give the Rangers another dimension to their attack and made teams pay for getting penalized. 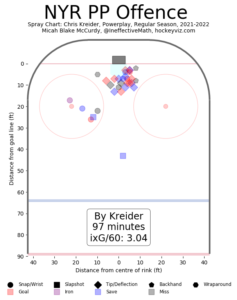 (Data and visuals courtesy of HockeyViz.com)

This goal against the Edmonton Oilers on Jan. 3 shows what the multitude of the winger’s goals come from in close. The chart from HockeyViz shows the majority of goals are tip-ins. Kreider stands at 6-foot, 3-inches and 217 pounds, which makes him difficult to push away from his the front of the crease.

His frame also makes it hard for goalies to see around him. A defenceman usually has to be devoted to dislodging Kreider from in front of the blue paint. This can disrupt a team’s usual penalty-killing formation. Teams mostly either play a box or diamond formation when killing penalties. A player good at tips can become a giant worry for the opposition.

Kreider Still Effective When not Scoring

However, Kreider doesn’t have to score to be part of an effective power play. Let’s go to a recent example of this against the Tampa Bay Lightning. New York is on the power play and the puck gets worked around to Zibanejad, who rotates over to the far boards.

Zibanejad works his way into the faceoff circle with a shot that finds its way past Lightning goalie Andrei Vasilevskiy to give the Rangers a 1-0 lead. The Rangers would win the game, 4-0, in one of the Blueshirts better performances of the season.

Panarin usually plays in the spot where Zibanejad scored, but the Russian was on COVID protocol. Rangers coach Gerard Gallant moved the Swede into that spot on the extra-man unit. Zibanejad was able to use Kreider as a screen and Vasilevskiy wasn’t able to track it until it was too late.

Kreider’s size helped make that goal possible and allowed a Blueshirts’ shooter an opportunity for the crucial opening goal. His size is more than just redirecting shots or stuffing home close rebounds. He can give Fox, Panarin, Zibanejad or any other shooter on the power play or prolonged possession to get an increased chance to score.

Shayna Goldman of The Athletic pointed out how Kreider is among the best in the league at tips and deflections. His finishing in front gave him a league-leading 18 tip-in goals. James van Riemsdyk was second with 11 for the calendar year. He scored six tips last season and accounted for 11 of his first 19 of the season.

The other end of the Rangers’ special teams has been great as they were fourth in penalty killing coming into Thursday’s action. New York carried an 84.8-percent kill rating when it was down a man. The Blueshirts are also seventh in goals against in the league coming into the game against Vegas.

There are concerns involving advanced metrics and an over-reliance on Igor Shesterkin to steal games. (Rangers fans are all too familiar with Henrik Lundqvist doing that.) However, New York can partially thank Kreider and its power play for it being in the mix for the Metropolitan Division crown.