John Tavares has been a key player for the Toronto Maple Leafs ever since they signed him in the summer of 2018. Scoring 47 goals in his first season with the team, and following that up with a more reasonable 30+ goal pace in his second year, he’s what you’d expect from a free agent of his calibre. But this season, Tavares started off rough in terms of converting on goals. Lately, though, this has turned around for him. For those watching closely, this turnaround is not unexpected.

Through his first 37 games this season, Tavares was shooting just 9.6%. This is well below his career average of 13.2%. It’s shocking how much a bad shooting percentage run can change people’s influence on the quality of a player’s game. John Tavares, through the same 37 games had scored 10 goals on 13.49 ixG (via NaturalStatTrick). This under-converting on his chances came in every aspect of his game. 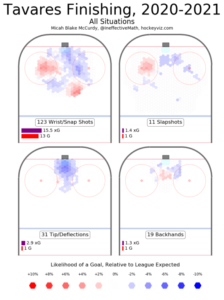 As we can see, Tavares has not been converting on all of his chances on the season like he should be, even including his last nine-game heater. Compare this to the season prior where Tavares both underperformed and overperformed depending on the situation, which ultimately led to a season with what was expected of him based on the chances he generated. 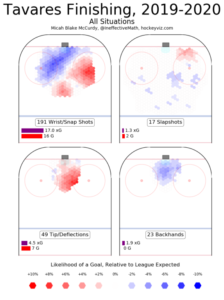 Lately, Tavares has been praised for “turning it around” and getting his season on track. While he certainly looks dominant, I believe Tavares’ puck luck is just finally regressing to the mean. He has six goals and eight assists for 14 points through the last nine games with the Leafs. His shooting percentage is at 20.7% through these nine games, and he has scored above his expected goals of 4.57 (via NaturalStatTrick).

While the results have been coming for Tavares recently, he hasn’t played poorly leading up to this point. The bounces are just finally going his way.

While it’s been great to see Tavares scoring again, I pose it to you that Tavares was not playing poorly leading up to this recent hot nine-game stretch. It was all smoke and mirrors based around his, and his line’s, poor puck-luck. He has not had to turn anything around because, over the large body of work through this season, Tavares has been playing well. Sure, there’s been off-games for him and his line like anyone else. I’d argue though, that these games were not as frequent as his goal and point totals would lead you to believe. Through this season, Tavares has been second on the Leafs in ixG in all situations, next to only Auston Matthews. He is fifth on the Leafs in on-ice xGF/60. He continues to play at a high level, and pucks seem to finally be going his way now.