When Zach Hyman debuted in his first full NHL season in 2016-17, he played on a line with William Nylander and Auston Matthews. Even though all three were rookies, this was very elite company for the left-winger. When first played in the top-six, he wasn’t seen as a legitimate top-six player. He was a complementary player. Fast forward to today and Hyman is still in the top-six. The difference is, there is no question that he belongs there.

The Emergence of Zach Hyman as a Top Six Winger

Zach Hyman has really emerged as a legitimate threat for the Toronto Maple Leafs over the past two seasons. On pace to score around 30 goals each of the past two seasons over 82 games, he is more of an offensive threat than ever. When we compare Hyman’s early years we can see quite a few differences in his game. 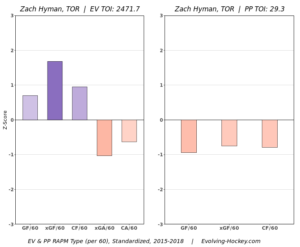 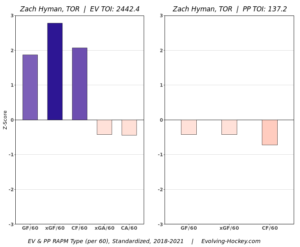 As we can see from the visuals above, the offence Hyman is generating has greatly improved from his first three seasons to his most recent three seasons. Hyman is much more effective at getting into dangerous areas to generate high-quality chances. He has steadily been improving this season by season, as we can see below. 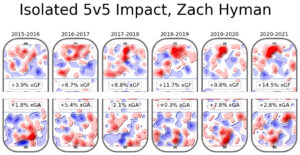 Hyman has become a much more threatening net-front presence in his recent time with the Maple Leafs.

Hyman’s shooting percentage is much more representative of what we expect of a top-six NHLer in recent seasons. Through his first three seasons, Hyman shot just 8.5%. Whereas in his most recent three, he’s shot 15.7%. While the latter number is inflated due to an absurdly high shooting percentage of 19.8% from the 2019-20 season that was unsustainable, this speaks to the improvement in his shooting in recent years.

This season, Hyman is shooting 13.3%. A very sustainable number, especially given the quality of chances he is generating.

Hyman has always been a hard worker. That’s been his “thing” ever since he joined the roster. It’s why coaches like Hyman so much. Now, Hyman has the ability to play like a top-6 player to compliment this tenacious work ethic that makes him so effective in 2020-21.

I’ve always thought Hyman has been a little overrated in terms of defensive capabilities. I felt like it was the fact that it looked like he was working hard in the defensive zone that made him look so competent. Maybe it’s the fact that all of his linemates and the Leafs as a whole have improved defensively, or maybe Hyman has actually emerged as a truly strong defensive player, but his on-ice results now reflect the reputation he has gotten.

This is the best we’ve seen Zach Hyman. He has been exceptional offensively, both generating lots of high-quality chances while converting on them at a sustainable rate. Hyman is also living up to his reputation as a key defensive piece of this team. It’s all coming together in the right year for Hyman. With it being a contract year, he could, if he wanted, go out and sign for a lot of money with another team. The Leafs should try very hard to convince Hyman to stay at less than his market value, as he is playing the best hockey of his career. It will be a challenge to try and retain Hyman this off-season, but with no other major UFAs, the team can put their time and resources into keeping Hyman. It will be worthwhile.