With the NHL season at around the half-way mark, we are going to look at which players in the NHL deserve which award so far. We will be breaking down the midseason 2020-21 NHL awards. In this series, the Last Word on Hockey team will decide who should have won each award based on the advanced numbers. Today, we’ll look at the Hart Trophy. For each award, we will be giving our top picks as well as two honourable mentions. These honourable mentions for our 2020-21 NHL Awards are not just players that are next on the list (though they could be), just individuals that are deserving of recognition.

Some ground rules to go over before getting into the winners and nominees, however. There has been much debate on what the criteria of “most valuable to his team” should be. In this article, the playoff position and overall standings will not be factored in. I will not look to punish great players on terrible teams for not making the playoffs. Similarly, I will not punish players just because they are on a strong team. With that out of the way, let’s see who we have winning the most prestigious individual award in the NHL.

This should come as no shocker to anyone. McDavid is the best player in the NHL. No matter what metric you decide to look at, it all comes back to McDavid being at the top, or within striking distance of #1. Most seasons McDavid has been able to claim the top spot in spite of his defence. This season, he has improved that area of play quite considerably. 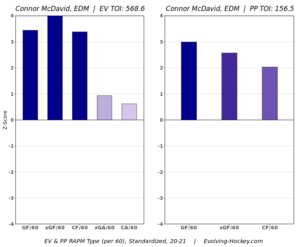 We can see above just how fantastic McDavid has been. If we compare this to McDavid’s past three seasons, we can truly understand how good he’s become. 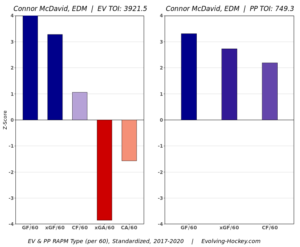 The fact that he has been able to shore up his defence so much without sacrificing offensive play like we’ve seen with other player, like Jack Eichel, is incredible. We’re seeing 2010-13 Sidney Crosby levels of offence, but from a competent defensive player this season.

McDavid is second in the league in ixG, second in xGF/60, first in GAR, and first in xGAR according to Evolving-Hockey. In the midseason 2020-21 NHL awards, Connor McDavid is without a doubt this seasons Hart winner.

I have been hard on Barkov for a long time now. I’ve said he’s incredibly overrated, that his defence is middling to below average, and just all around no where near as good as people say he is. It seems he took that personally. Barkov has put up an incredible season. His defensive impact is actually what people previously thought it was. 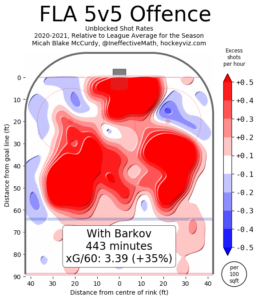 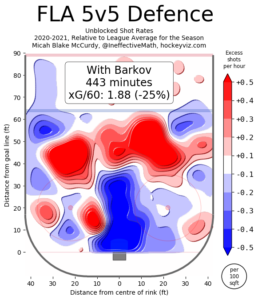 Barkov has been playing out of his mind. He’s second league-wide in xGF%, and has more than 250 more minutes played than first place. He’s top 10 in the NHL in ixG, and is 28th among forwards in xGA/60 at 5v5. He is a legitimate two-way threat, and if McDavid’s offence wasn’t so incredibly next level, he’d have a legitimate case at winning the Hart based on his performance this season.

The opposite of Barkov above, if you ask anyone I know, they will tell you about how highly I talk about Stone. He really does it all. Stone is seventh in the league in xGAR according to Evolving-Hockey. He does this through effective 5v5 play, primarily offensively, but his defence has provided some value this season, but not as much as others. 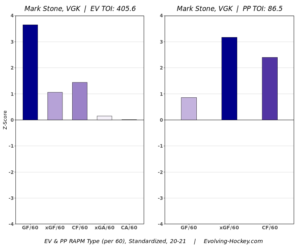 Stone has really shined through on the special teams, however. As we can see above, Stone has been incredible on the powerplay. In fact, he ranks 14th league-wide in xGF/60 on the powerplay. Not only that, but he has the best xGA/60 leaguewide while short handed (both with a minimum of 20 minutes played). The time stone has played on the penalty kill has certainly helped Vegas towards their 6th best PK unit.

As I mentioned in the Vezina article, I’m a pretty harsh critic of Vasilevskiy’s. Similarly to Barkov, I didn’t buy into all the hype of Vasilevkiy. I thought he was a product of his circumstances in Tampa. However, like Barkov, he’s completely turned it around and now deserves the high praises he receives.

The Lightning would not be as dominant as they are if it weren’t for Andrei Vasilevkiy emerging as a top goaltender on his own, even without the help from an elite defence. His play has far surpassed the results of “just a good defence in front of him”.

Matthews has had an incredible start to the season. While he has cooled off of late (and probably would’ve been top three if this was two weeks ago), he is still an incredible player. 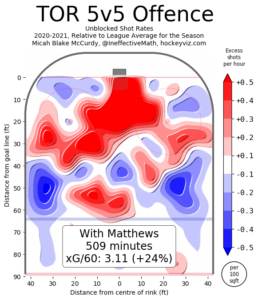 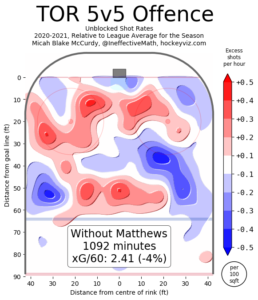 The Leafs are undoubtedly better with Matthews on the ice at 5v5 than without. It’s staggering the difference he makes in terms of offensive impact. This comes while also having the third best xGA on the Leafs among forwards at 5v5.

Matthews ranks thrid in the league according to Evolving-Hockey‘s xGAR totals. This is just another metric that is indicative of how good Matthews’ play has been in the 2020-21 season. Similarly, Matthews is also third in ixG on the season. It’s the offence that Matthews is able to generate that makes him stand out above most in the NHL, however, now that his defence is no longer holding him back, he’s really begun to hit yet another level with his play.

It was really hard not including Draisaitl on this list. Like his teammate, Draisaitl has also picked up his defensive performance so it’s not repulsive. This change in his play makes his offence that much more appealing. Draisaitl has definetly been able to build off his performance last year offensively.

Girard is an interesting case. He’s been one of the best defencemen in the league this year. I’ve been saying for about a year and a half now, it was only a matter of time before Girard really broke out. But I couldn’t have even predicted this level of play from him. It’s incredible, because three defencemen on the Avalanche could make a case for being the best on the team, and could even all be included in the Norris discussion, but Girard has really just been a step above.