With the NHL season at around the half-way mark, we are going to look at which players in the NHL deserve which award so far. We will be breaking down the midseason 2020-21 NHL awards. In this series, the Last Word on Hockey team will decide who should have won each award based on the advanced numbers. Today, we’ll look at the Norris Trophy. For each award, we will be giving our top three picks as well as two honourable mentions. These honourable mentions are not just players that are next on the list (though they could be), just players that are deserving of recognition.

Thanks to Patrick Bacon and Evolving Hockey for the data used in this article.

There’s really no clear way to pick a Mid-Season Norris Trophy winner. There are simply too many players to consider. Players like Jeff Petry and Samuel Girard have reached new peaks through the absolute domination of special teams. Cale Makar has looked like Connor McDavid‘s defensive-counterpart in eye-tests and is a statistical wonder of his own. And Darnell Nurse is making something out of nothing on the Oilers blueline.

But the biggest standout of the bunch comes on the most unsuspecting team. Adam Pelech has been… magnificent. He and Ryan Pulock have combined for one of the best pairings in the NHL. They’ve put together a 2.94 xGF/60 and 1.74 xGA/60, giving them an xGF% that ranks them well into the 92-percentile of the league’s defensive pairings. But if his success with Pulock wasn’t enough, Pelech has also made Andy Greene look good. Seriously. Together, the two have combined for a 67.48 xGF%. Their pairing ranks ninth in the entire league in that statistic and a bulk of that rank can be attributed to Pelech’s proficiency.

And that’s where Pelech has truly dominated. His special team-play has been good-not-great but his even strength has been other-worldly. That’s best indicated by Patrick Bacon’s RAPM model and, more specifically, their RAPM-adjusted xG +/-. This isolates their offensive performance and defensive performance, to help show their individual impact. Adjusting it for ice time, or per-60 helps put everyone on an even playing field. In Bacon’s model, Connor McDavid ranks first in RxGPM(+/-)/60 with a 0.53. Second-place is a two-way tie between Joel Eriksson Ek, a forward who has quickly become his team’s top centre, and Adam Pelech. Both players clock in at 0.50. To rank so close to McDavid is incredible and speaks plenty to Pelech’s even-strength performance. The next-best defenceman is Mike Rielly, who has a 0.40, a fairly noticeable dip.

Sam Girard has lived in the shadow of his teammates for years. But he’s finally exploding this year. He’s been absolutely incredible, one year after signing a seven-year, $5 million AAV contract. The new money has made him into even more of a star behind-the-scenes player than he was previously.

It’s hard to argue for Girard without just listing the stats he’s among the top players in. Among all NHL defencemen with at least 300 minutes of ice time this season, Girard tops the league in CF% (Corsi-for percentage), a stat that he’s achieved by topping the league in CF/60 and ranking second in CA/60. He also ranks third in FF% (Fenwick-for percentage), fourth in xGF%, and second in xGAR/60. That’s a lot to take in but it goes to say that Girard has been absolutely dominant in controlling possession for his team. Not only that, he’s incredible at doing something with that possession, as made evident by his xGF%.

His tremendous xGAR/60 (expected-goals-above-replacement per-60) is worth a closer look, though. He trails only Jeff Petry in the category but the two have one big difference. They’ve both dominated at even-strength, with nearly-identical xEVO/60 and xEVD/60 (expected even-strength offence/defence). But Petry has, by far, been the league’s best defenceman on the power-play, while Girard has been a bit below average on the PP, shown by the 106-rank discrepancy between their xPPO/60 rankings (Petry: 1st, Girard: 107th). But their penalty kill abilities are much different, with Girard ranking in 95 spots higher than Petry in xSHD/60.

It’s ultimately a debate of whether one values offence or defence more in a defenceman. And given Girard’s superiority in his own end, as well as his utter dominance in possession, he’s well-earned the runner-up spot on this list.

Whereas Adam Pelech has nearly-matched McDavid statistically, Cale Makar has looked like his defensive-counterpart visually. He’s been absolutely phenomenal and he’s tied for second in points-per-game among NHL defencemen (with more than five games played) because of it.

The advanced stats plead a similar case for Makar. He is among the top in most advanced stat categories. He ranks second among NHL defencemen (>300 mins) in CF%, second in FF%, eighth in xGF/60, and fifth in xGA/60. That’s a case strong enough in-and-of-itself. But what’s more, Makar ranks third in Evolving Hockey’s xGAR/60 model. He’s just behind Petry and Girard. And while it’s hard to push Petry back one spot more, Makar has provided a bigger impact on his team’s penalty kill, ranking 14th in xSHD/60. That’s an impressive stat, especially for a player like Makar. It speaks to how dynamic he is and earns him a comfortable spot in third. Makar will be walking away with something at the 2020-21 NHL Awards.

Petry’s name came up a lot. And rightfully so. He’s having an absolutely incredible year, very nearly earning the title of the best offensive-defenceman in the NHL. But there’s a missing layer to his game. He’s dominated offence but has skipped out a bit on defence. He ranks 97th among the league’s defensemen in xDef/60 (expected defence), nearly perfectly middle-ground.

Charlie McAvoy’s RAPM chart on Evolving Hockey speaks for itself. He’s once again dominating the league, even if his point-totals might not reflect it. 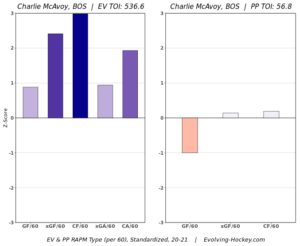 With a chart this impressive, there’s little to argue about. McAvoy ranks 14th in Evolving Hockey’s xGAR/60 model and, when shooting talent is removed, fifth in Bacon’s model. He’s been an absolute stud but doesn’t have the shooting ability of some top-end defencemen, so his dominance has remained muted. Still, the Bruins are the team they are because of McAvoy and he is well-worth a 2020-21 NHL Awards nod.