With the NHL season at around the half-way mark, we are going to look at which players in the NHL deserve which award so far. We will be breaking down the midseason 2020-21 NHL awards. In this series, the Last Word on Hockey team will decide who should have won each award based on the advanced numbers. Today, we’ll look at the Vezina Trophy. For each award, we will be giving our top picks as well as two honourable mentions. These honourable mentions are not just players that are next on the list (though they could be), just players that are deserving of recognition.

For a long time, Andrei Vasilevkiy seemed to be a product of his environment. Tampa has been a strong team all around for years now. Among the top of the league offensively and defensively. I have been a very harsh critic of Vasilevskiy’s in the past. However, in the 2020-21 season, in my eyes, Vasilevkiy has finally become the top-tier goalie that others see him as. Vasilevkiy leads the league in many categories, including 5v5 high danger save percentage with 0.911, 5v5 save percentage with an outstanding 0.949, goals saved above expected at all strengths with 14.82 just to name a few.

The emergence of Vasilevkiy being a top goaltender rather than just relying on the good defensive play in front of him has turned the Tampa Bay Lightning into the scariest team in the NHL. Vasilevskiy has been quite literally stealing the Lightning games. According to Evolving-Hockey, Vasilevskiy has provided the Lightning with 4.1 wins above replacement.

Vasilevskiy, while in a position to succeed, has taken full advantage of the opportunity laid in front of him and has emerged as this season’s best goalie in the league. Vasilevkiy is no longer just a product of his environment but is truly a top goalie in the NHL.

Marc-Andre Fleury has gone from hardly an NHL backup to a top goaltender in a matter of months. After losing the starting job in a rather dramatic fashion (and rightfully so) to Robin Lehner in the 2019-20 Stanley Cup Playoffs, he has taken the league by storm. 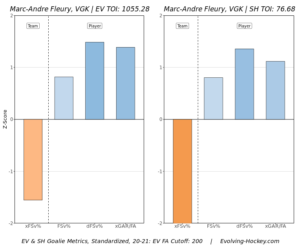 Fleury has saved well above expected through 21 games this season, saving 13.64 goals above expected (2nd in the NHL). The Vegas Golden Knights haven’t been playing as well as they have in prior seasons, so Fleury’s dominance is all the more helpful. Fleury leads the league in save percentage in all situations with a 0.9312 with a minimum of 300 minutes played.

Thatcher Demko has had the unfortunate circumstances of playing on the Vancouver Canucks. The team is sitting outside a playoff spot at 6th in points percentage in the North Division. Demko has been extremely successful despite this. Demko has faced a league-high of xGA at 74.72. In spite of this, he has put up a 0.9207 save percentage through 23 games. If not for Demko the Canucks would be even further out of a playoff spot.

Demko has really emerged as one of the league’s top goalies, stealing the games for the Canucks against teams like the Toronto Maple Leafs or Edmonton Oilers, both of whom have elite offences. Demko’s role on the Canucks should not be slept on. He has kept them somewhat in it this season, especially for how lacklustre their defensive capabilities have been.

Calvin Petersen seems to be one of this season’s surprise goaltenders. Backstopping the LA Kings, Petersen has been a huge reason for their mild success this season. Expectations for the team was to be closer to 7th or 8th in the division, rather than just a few points behind the St. Louis Blues for a playoff spot. This is in large part due to Petersen’s 8.73 GSAx (good enough for 6th league-wide) and 6th place 5v5 high danger save percentage.

Credit to Evolving-Hockey, NaturalStatTrick, and HockeyViz for stats used.

Check in again tomorrow for more of our midseason 2020-21 NHL awards!