William Nylander often gets a lot of flack from fans, but it’s often not justified. He provides lots of qualities that an NHL team would desire. He has a lot to offer in terms of offence and does a lot of things right. With all that said, he still hasn’t hit the heights he is capable of. William Nylander still has more to offer, and will only get better with age.

Last season, Nylander really bounced back after an unlucky 2018-19 season. He was on pace for 37 goals before the shutdown but still finished with 30+ goals. These are high numbers for a player in the National Hockey League, and to expect more from someone would be to have high expectations. Nylander, however, has numbers indicating he can be better. According to hockeyviz.com, the Leafs were able to generate an xG/60 of 3.28 with Nylander on the ice, as opposed to the 2.97 G/60 that was actually scored. 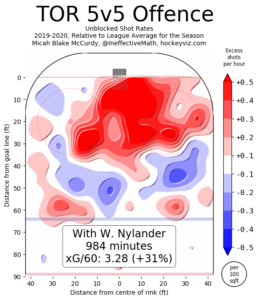 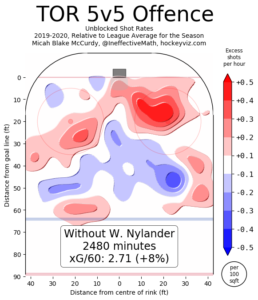 Data and visuals from hockeyviz.com

Nylander’s ability to generate chances was seemingly unmatched last season by any player on the Leafs roster. Not only in quality but quantity.

William Nylander’s passing ability is criminally underrated when discussing top NHL passers. While he often gets overshadowed by fellow right-winger Mitch Marner, Nylander is certainly one of the best passers on the Leafs, and in the league. We can see this in the 5v5 shots & passes graph from Corey Sznajder. 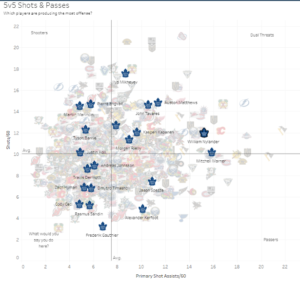 Data and visuals by Corey Sznajder

Breaking this down, we can see, while Nylander poses as a “dual-threat”, his true strength is passing. He generates 15.24 shot assists/60. This puts him in a similar range to a player like Artemi Panarin, who generates 15.19 primary shot assists/60. As previously, Nylander is able to do this while generating high-quality chances. This is what makes Nylander such a threat, and what shows that he has more potential moving forward.

He has an extremely good toolkit. He has the offensive ability to generate lots of high-quality scoring chances. His ability to be such a dangerous passer, while still threatening a shot on goal is what can make Nylander better. Having multiple options when playing in the offensive zone is what makes some of the top players the best. This option availability is what could have him stand above some “pure playmakers” or “shoot first” players. This is what will continue to make Nylander so great.

While this aspect is less tangible, we have seen that Nylander is able to produce a good defensive season. While he was unable to get the offensive results he wanted in 2018-19, Nylander was able to put up his best defensive season at 5v5. 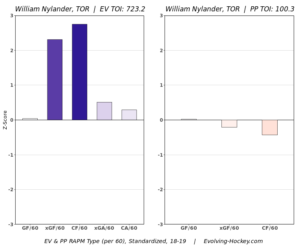 Data and visuals from evolving-hockey.com

As we see above, Nylander was able to put together an above replacement season defensively in 2018-19. He was close to doing the same in 2019-20. He has shown the ability to grow as a player defensively over the course of his career.

If he is able to pull together a consistent defensive game while maintaining all of his positive offensive attributes, Nylander could become even more of a threat in the NHL.

If things start to break Nylander’s way even more, and his production will catch up with expectations. This will only help Nylander grow with the Toronto Maple Leafs. Only only that he will become even more difficult to play against.