Seven. Seven is the number of goals William Nylander scored last season. For a player that’s going to have a $6.9 million AAV cap hit for the next five seasons, that seems concerning at first glance. That ties him with former Leaf Eric Fehr for goal totals last season. Nylander, however, is not going to be a seven goal scorer for his career. He is an elite offensive talent that is primed for a huge redemption season.

With Dubas and Nylander taking the contract negotiations all the way to its limit, not making the deal official until 4:55 pm on December 1st, five minutes before the deadline, Nylander had already missed a significant chunk of the season. Nylander only played in 54 games last season, meaning he missed 28 games plus all of training camp and pre-season.

This time away seemed to hurt his season in the games he actually played. He posted seven goals and twenty assists. These are not the numbers to expect from a player with Nylander’s history.

In his first three seasons (only two full seasons played) Nylander shot 14.0 percent in 22 games, 10.7 percent in 81 games, and 10.9 percent in 82 games. Last season, Nylander shot a 5.4 percent, which is about half of his previous worst season.

If Nylander had shot his career average prior to this season of 11.1%, on the 130 shots he took he would’ve scored 14 goals in 54 games. That’s 21 goals over a full 82 game season. A lot better than just the seven he actually scored. Nylander has proven he isn’t a 5.4 percent shooter, and it’s highly doubtful he will continue to get as unlucky as he did last year.

While looking at the point totals for last season, Nylander looks fairly underwhelming, but his ability to drive play has never faltered.

Last season William Nylander led the team in 5v5 CF% with a 56.01 and second on the team in Rel CF% at +4.17. He continues to drive play up the ice in his team’s favour. Also leading the team in xGF% with 56.95 percent, ahead of players like John Tavares and Auston Matthews, Nylander not only had quantity in his chances last season but he also generated quality. The fact that he drove play so well, creating lots of chances and lots of good chances shows how well he was playing.

Breaking down his play even further, Nylander continued to exit the defensive zone and enter the offensive zone with control like he has his entire career. While the numbers typically stabilize after 30+ games, Nylander’s first two full years (on the left). His most recent season (on the right) show he didn’t slow down this year in that department either. 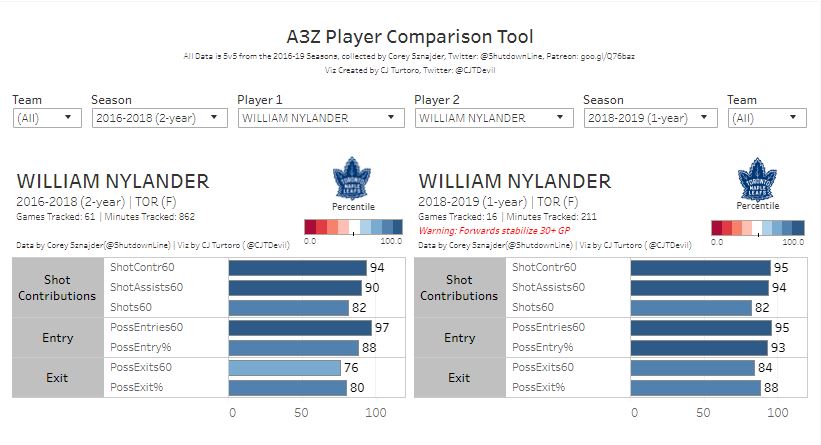 For most of his career, Nylander and Matthews have played together and have been successful. Last season, however, the two spent the majority of their time apart. Matthews played a lot of the year with Kasperi Kapanen and was reportedly very frustrated when Matthews was open and Kapanen would make a low percentage play.

William Nylander would have hit Matthews in the slot with the pass here pic.twitter.com/g5TjweAab3

Nylander and Matthews not only have the experience together, but their styles heavily complement each other: 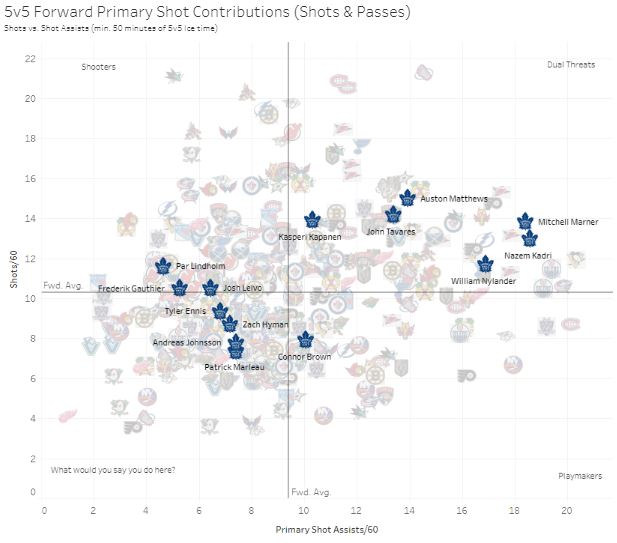 Data and visuals by Corey Sznajder

While both Nylander and Matthews fall under the “dual threats” quadrant, Matthews leans closer towards the shooter’s category, and Nylander is one of the best playmakers in the league by the evaluation.

With all signs pointing towards those two players being reunited next season, both Matthews and Nylander will benefit.

All of this is the right makings for a large bounce-back season for William Nylander. There’s no reason to believe Nylander will continue to put up such poor point totals next season. He is an early favourite to have a huge redemption year.

Currently attending Brock University for Sport Management, I am a contributor here on Last Word On Hockey. I write about the Toronto Maple Leafs and Carolina Hurricanes.