The Chicago Blackhawks have re-signed restricted free agent forward Dominik Kubalik to a two-year contract worth $7.4 million, or $3.7 million per season. This contract carries him through the 2021-22 season.

Forward Dominik Kubalik has inked a 2-year contract extension that runs through the 2021-22 season! #Blackhawks pic.twitter.com/z31ES8m8d8

Kubalik scored 30 goals and 16 assists for 46 points in 68 games last season with the Blackhawks. He also added 16 penalty minutes in his rookie season. His Corsi for was 50.4 and he had a relative Corsi of 2.3. The Los Angeles Kings drafted him in the seventh round, 191st overall of the 2013 NHL Draft. His rights were traded in January 2019 as part of a deal for a fifth-round pick.

The Plzeň, Czech Republic native was a finalist in the Calder Trophy voting for the league’s top rookie. Kubalik finished third in the voting behind eventual winner Cale Makar and Quinn Hughes.

He also added four goals and four assists for eight points in nine games between the qualifying round of the 2020 Stanley Cup playoffs and the first round. He was part of his country’s Olympic squad in 2018 and has played in two IIHF Wold Championships. His breakout tournament was in 2019 when he scored six goals and 12 points in 10 games.

The young forward seems to be part of the Blackhawks plans at a youth movement for the next couple of seasons. Chicago has young players like Alex DeBrincat and others to help along the stalwarts like Patrick Kane and Jonathan Toews.

General manager Stan Bowman has shed pled of payroll this off-season in not bringing back Corey Crawford after years of service with the team. The re-signing of Malcolm Subban in goal shows the Hawks are going to go with youth in plenty of spots.

This deal also gives Kubalik to prove he deserves a bigger payday when this deal runs out in a couple of seasons. He will still be an RFA at that point. 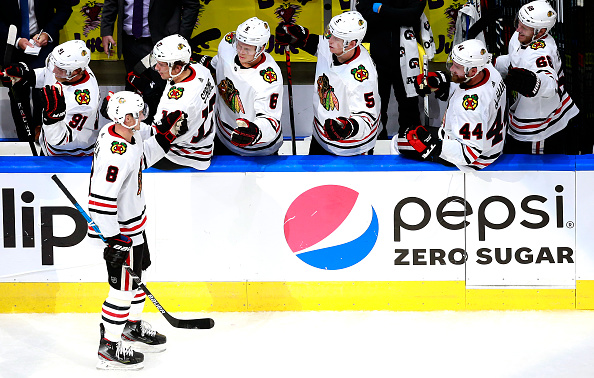