Now that the Game Two of the Florida Panthers vs New York Islanders Series has ended, the Islanders have taken a commanding two games to none series lead. These two teams are the epitome of offence versus defence, with the latter prevailing. Heading into Game Three at Noon ET Wednesday, the Panthers find themselves in a very deep hole.

If anyone wants to see the real example of one step forward, two steps back then re-watch the first two games of this qualifying round match-up. Constantly taking unnecessary penalties, the Panthers could not stay out of the box. Between the two games, the Islanders had ten power-play opportunities. Luckily for the Panthers, the Isles did not take much advantage of this. Going three for ten on the power-play, the Islanders were on the man advantage for 34 minutes.  Over half a game. Even though the Islanders are not known for their offensive abilities. Any team given that much time on the man advantage is going to score goals. Panthers captain Aleksander Barkov put it very plain and simple…

Barkov: "Penalties, they cost us in this game."

The Panthers constantly shot themselves in the foot, this game and last. Hockey is a game of mistakes, at the end of the day the team that makes the least number of mistakes ends up winning the game. The Panthers lead twice in the second game, only to lose those leads minutes after the game. Whether they ruined their own power-play opportunities or lacked communication in their defensive zone, handing the Islanders Game Two.

It seems the Cats only get going when they need to most. Lacking fire and passion in their game. Even though they had a hot start in the second game, they would continue by putting things on cruise control the second something went their way. Allowing the Islanders to steal the game from them.

New York Islanders Defensive Structure too much for Panthers

Coming into this series, the Islanders were known for their defensive zone structure during the regular season. Even with a four-month break, the Islanders didn’t lose a beat. The Isles were able to shut down the league’s sixth highest-scoring team in the league to just three goals between two games. The Panthers really couldn’t get anything going offensively in the second game. As you can see below, most of their shot opportunities came from the outside and the ones that were in the slot weren’t dangerous at all. Allowing for Semyon Varlamov to close out the Panthers regardless of how little of quality the shots maybe. 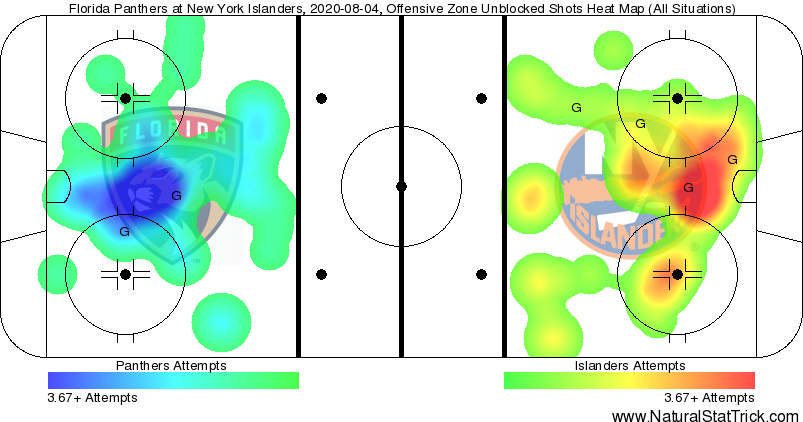 In the most basic sense, the Islander has played both games exactly how they wanted to. Despite a few short bursts of energy, the Panthers had no offensive zone structure to them. Everything ended up being a dump-and-chase resulting in an easy breakout for the Islanders. While the Islanders sit and wait for their opponents to make mistakes, guys like Jordan Eberle and Anthony Beauvillier are leading the way on the offensive front. With two points each through two games, these guys have helped lead the way for the Islanders.

With many people looking to Bobrovsky as the reason the Panthers lack consistency, it has been more the guys in front of him leaving him out to dry. The Cats have been notorious for allowing some of the best shot qualities to their opposition. Florida must be better defensively if they are going to have any shot at winning at least one game against the Islanders.

With Game Three of the Florida Panthers vs New York Islanders only a day later, the Panthers find themselves in a serious bind. On the brink of elimination, the islanders are comfortably in command and will look to continue that streak. The Panthers can pray for one last-ditch effort but with how they are playing the Islanders will look to bring their broomsticks to the rink on Wednesday.