Welcome back to Last Word on Hockey’s summer series where we look at the biggest game in team history. Each day we will be back with a new team to look at. Looking at things like the lead-up, what happened, followed, and why it makes it the biggest game. The biggest game does not automatically mean a win, either. Sometimes, it can be a loss that set the franchise back massively. Sit back and enjoy as we break down all 31 team’s most important game. This is the Nashville Predators biggest game in franchise history. The full series is found here.

The Nashville Predators started play in 1998 and didn’t make the post-season for the first five seasons. Nashville almost lost the team to Hamilton, Ontario and Kansas City, but local ownership took over in 2007.

The Predators became a playoff fixture in the late 2000s and early 2010s. Nashville failed to make the post-season in the lockout-shortened 2013 season and the 2013-14 campaign. Longtime general manager David Poile made the change of bringing in Peter Laviolette in place of Barry Trotz.

Nashville upped the tempo in their game and relied on Pekka Rinne and a great defence to make the playoffs the next two seasons. However, the Predators needed to make a change and swapped captain Shea Weber to the Montreal Canadiens P.K. Subban in the June 2016.

Leading Up to Game 6 of the Western Conference Final

The Predators were very inconsistent in the 2016-17 regular season. They looked like a top contender in November, January and February. However, they looked beatable in October and December.

Nashville got in as the eighth-seeded team in the Western Conference and the No. 16 team overall. The Predators drew the rival and Central Division winning Chicago Blackhawks in the first round. Viktor Arvidsson gave Nashville the only goal of the game and Rinne made 29 saves to steal Game 1. The Predators got another shutout from the Finnish goalie to take both games at the United Center. Kevin Fiala scored in overtime in Game 3 and the Preds took Game 4 to shockingly sweep the Blackhawks. Filip Forsberg bagged the first hat trick in franchise history to seal the deal.

The rival St. Louis Blues were next in the second round and Rinne was at his best again. He kept St. Louis off the board and Nashville advanced in six games to set up the Western Conference Final against the Anaheim Ducks.

James Neal gave the Predators their third straight series-opening win with a 3-2 overtime victory over the Ducks. The teams traded wins until Nashville took Game 5, 3-1, thanks to third-period goals by Pontus Aberg and Austin Watson to set up Game 6.

Nashville’s offence normally scores three goals and relies on Rinne to win games. However, the Predators came alive that night. Watson and Colton Sissons gave Nashville a two-goal lead after the first period.

Ondrej Kase helped Anaheim draw closer with the only goal of the second period. Rinne kept making save after save to keep the Ducks from tying the game on his way to a 38-save performance.

Sissons restored the two-goal lead three minutes into the third period, but Chris Wagner and Cam Fowler tied the game for Anaheim with goals three minutes, 52 seconds apart. The Ducks had the momentum, but Sissons completed only the second hat trick in franchise history with only six minutes left in regulation.

Forsberg and Watson added empty-net goals to seal Nashville’s first trip to the Stanley Cup Final. It was the first trip to a professional championship for a team from Tennessee since the Tennessee Titans made the Super Bowl in 1999.

The Predators set up a showdown with the defending Stanley Cup champion Pittsburgh Penguins. Nashville wasn’t able to win any of the first two games at the PPG Paints Arena but were able to win the next two games at Bridgestone Arena, 5-1 and 4-1. Frederick Gaudreau scored in both games for the team.

Pittsburgh would win its second straight crown thanks to back-to-back shutouts from Matt Murray as the Pens took Game 5, 6-0, and Game 6, 2-0. Captain Sidney Crosby took home the Conn Smythe Trophy.

Nashville would win the President’s Trophy next season but lost to the Winnipeg Jets in seven games in round two. The Predators would win the Central Division again in 2018-19 but were beaten by the Dallas Stars.

Poile would deal Subban to the New Jersey Devils in an effort to free up money to get Matt Duchene. Most of the core is still together and still has a chance to give “Smashville” a Stanley Cup.

There was debate that the Game 7 loss to the San Jose Sharks in the Western Conference semifinal was more important. It may have set the wheels in motion to make the Weber for Subban trade.

Game 6 of the 2011 Stanley Cup playoffs also deserves a mention as the Predators won their first series in franchise history by beating the Ducks. 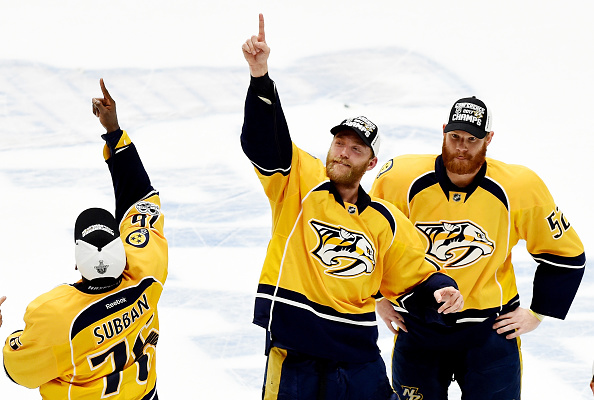 NASHVILLE, TN – MAY 22: The Nashville Predators celebrate after defeating the Anaheim Ducks 6 to 3 in Game Six of the Western Conference Final during the 2017 Stanley Cup Playoffs at Bridgestone Arena on May 22, 2017 in Nashville, Tennessee. (Photo by Sanford Myers/Getty Images)