Welcome back to Last Word on Hockey’s summer series where we look at the biggest game in team history. Each day we will be back with a new team to look at. Looking at things like the lead-up, what happened, followed, and why it makes it the biggest game. The biggest game does not automatically mean a win, either. Sometimes, it can be a loss that set the franchise back massively. Sit back and enjoy as we break down all 31 team’s most important game. This is the Calgary Flames biggest game in franchise history. The full series is found here.

The Calgary Flames moved from Atlanta in 1980 and were immediately embraced by the city. Calgary did have a WHA team in the Cowboys, but they didn’t really get off the ground. Cliff Fletcher started the makings of a winner in the mid-1980s and culmination was Game 6 of the 1989 Stanley Cup Final.

Leading Up to Game 6 of the Stanley Cup Final

The Flames won the President’s Trophy for the best regular-season record, but that didn’t matter in the opening round. Calgary was nearly eliminated in the first round of the Smythe Division playoffs. Joel Otto got credit for the overtime winner in Game 7 to help the Flames get by the Canucks. Jim Peplinski’s shot ricocheted off Otto’s skate and was the difference.

Calgary needed another overtime-winner in Game 1 of the division final against the Los Angeles Kings from Doug Gilmour. However, the Flames ended up sweeping the Kings in four games to set up a showdown with Cinderella Chicago Blackhawks.

The teams split the first two games in the Olympic Saddledome, but Calgary won out in five games. Al MacInnis got another OT-winner in Game 4 and Mike Vernon played stellar in goal.

The 1989 Stanley Cup Final was a matchup between the two best teams in the league with the Flames taking on the vaunted Montreal Canadiens. Montreal had beaten Calgary in the Flames only other Stanley Cup appearance in 1986.

Both teams won a game each at the Saddledome, but Montreal got the upper-hand in Game 3 after Ryan Walter’s game-winner in double overtime. However, Calgary bounced back in Game 4 with a pair of power-play goals by Joe Mullen. Calgary then took Game 5 at home to set up the Cup-clinching game.

Colin Patterson opened the scoring late in the first period to give the Flames the lead after one period. Claude Lemieux quickly tied the game in the second period for the Habs, but veteran Lanny McDonald registered his only goal of the post-season three minutes and one second later to give the Flames the lead again. McDonald had 43 goals and 40 assists in 116 post-season games prior to Game 6. However, he had never hoisted the Stanley Cup in his long career.

Gilmour scored a power-play goal off his own rebound 11:02 into the third period to put Calgary up by two goals. The Flames were less than two minutes away from securing their first Stanley Cup. However, a controversial Rick Green goal made the last few moments nervous for the Flames.

Calgary eventually sealed the game with an empty-net goal with 1:03 left in regulation. It was the 11th goal of the playoffs for the Kingston, Ontario native. MacInnis was the leading point-getter with seven goals and 24 assists for 31 assists. That performance was good enough for the defenceman to get the Conn Smythe Trophy. He finished the post-season with a 17-game point streak.

Mullen was the Flames’ top goal-scorer with 16 goals while Gilmour added 11 assists to go with his 11 goals.

The Flames’ Game 6 win was the only time an opposing team lifted the silver chalice at the Montreal Forum. One of the seminal moments of the victory is McDonald finally getting his hands on the Stanley Cup.

McDonald would retire after the final and put a bow on a Hall-of-Fame career. The Flames would add another division title next season but were shockingly eliminated by the Kings in round one in six games. Many were hoping for a revival of the Battle of Alberta between the top two teams in the Smythe.

Calgary would stay a fixture in the playoffs until the late 90s, where it would miss the post-season for seven straight seasons. However, Jarome Iginla and the Flames would become the first team in league history to defeat three division champions to reach the Stanley Cup Final. Calgary’s magical run was ended by the Tampa Bay Lightning. 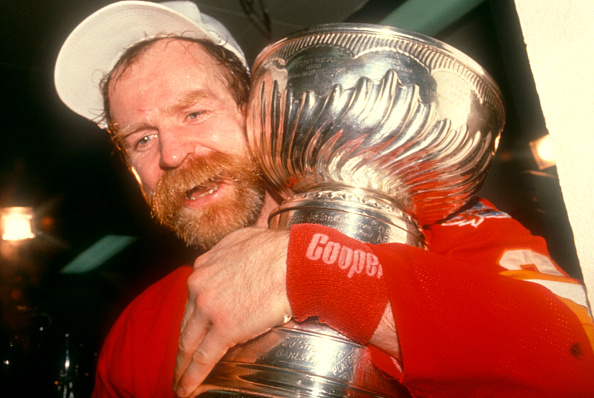 MONTREAL, QC – MAY 25: Lanny McDonald #9 of the Calgary Flames hugs the Stanley Cup Trophy in the locker room after the Flames defeated the Montreal Canadiens in Game 6 of the 1989 Stanley Cup Finals on May 25, 1989 at the Montreal Forum in Montreal, Quebec, Canada. (Photo by Bruce Bennett Studios via Getty Images Studios/Getty Images)