It was announced Saturday that the Vancouver Canucks have bought out the remainder of Ryan Spooner‘s contract. He had one year left on a two-year, $8 million deal he signed with the New York Rangers on July 31, 2018. Since the Rangers retained salary when Spooner was traded to Edmonton, the Rangers are on the hook for this buyout too. Spooner will cost the Canucks $1,033,333 for two seasons, while the Rangers will be responsible for $300,000 a year.

#Canucks place Ryan Spooner on waivers for purpose of a buyout.https://t.co/gDuSXtg0zL

Ryan Spooner Bought Out by Canucks

Spooner enters unrestricted free agency after a very up-and-down career. Over his seven-year NHL career, Spooner has played for the Boston Bruins, Rangers, Edmonton Oilers, and Canucks. He has put up 48 goals and 119 assists for 167 career points in 325 career games. He was originally drafted in the 2nd round, 45th overall of the 2010 NHL draft by the Bruins.

Last season he scored three goals and six assists for nine points. He also added two minutes in penalties. His possession numbers were 46.2 percent Corsi and a relative Corsi of -0.7.

Spooner obviously had a terrible year coming off of a 41-point campaign with the Bruins and Rangers the season prior. He’s shown 40+ point potential if put in the right situation, and a team should be willing to take a gamble on him as he won’t be costing very much. Spooner will find a home soon.

As for the Canucks, seeing Ryan Spooner bought out frees up cap space that they very much need. This decreases the effect (for this year, at least) of the recapture penalty imposed by Roberto Luongo‘s retirement. The Canucks have been linked to many big fish free agents as they try to re-enter the playoff realm, and this gives them some added flexibility. 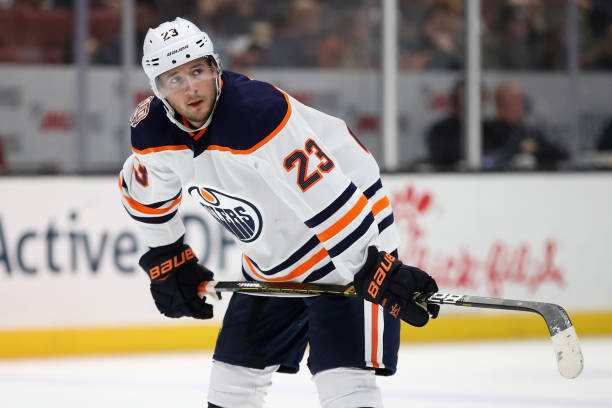 ANAHEIM, CA – NOVEMBER 23: Ryan Spooner #23 of the Edmonton Oilers looks on during the third period of a game against the Anaheim Ducks at Honda Center on November 23, 2018 in Anaheim, California. (Photo by Sean M. Haffey/Getty Images)