Per TSN’s Bob McKenzie, the Buffalo Sabres acquire Colin Miller from the Vegas Golden Knights in exchange for a 2021 2nd round pick and a 2022 5th round pick.

In Miller, the Sabres get an offensive defenseman with power-play expertise and good two-way play. This season, he scored three goals and 26 assists for 29 points, adding 44 minutes in penalties. His possession numbers are 56.9 percent Corsi and a relative Corsi of 3.0. Those totals are down compared to last season, where he scored ten goals, 31 assists for 41 points.

Over his four-year NHL career, Miller has played for the Boston Bruins and Golden Knights. In that time, he has 22 goals and 77 assists for 99 career points in 250 career games. He was originally drafted in the 5th round, 151st overall of the 2012 NHL draft by the Los Angeles Kings.

Miller is entering his prime at age 26 and still has three years left on his deal. He adds to the Sabres’ stockpile of younger, versatile defensemen that already includes Brandon Montour, Rasmus Dahlin, and Lawrence Pilut. This move is geared towards getting the Sabres out of their lengthy playoff drought.

So not only do the Sabres acquire Colin Miller, they acquire him as he’s entering the best years of his career on a very friendly $3.875 million cap hit. With a team that’s expected to be on the rise soon, good contracts like that are of high value when RFAs need to be paid out. Miller certainly gives a large boost to this Sabres squad.

Vegas clears off some more salary as they race to get under the $81.5 million cap. They dealt Erik Haula to the Carolina Hurricanes earlier in the week.

They’re being given the tools they need, is next year finally the year they re-enter the dance in April? We’ll see how Miller helps. 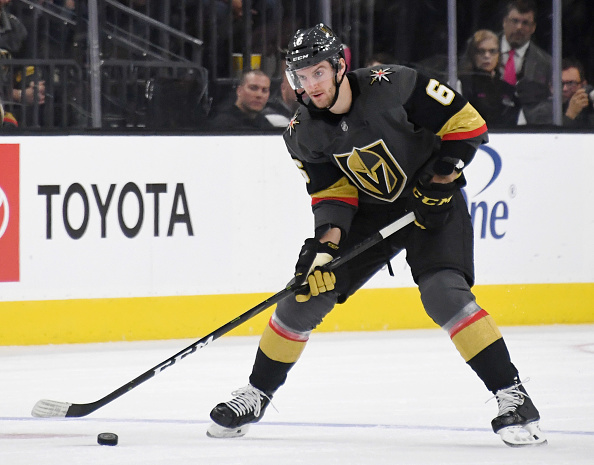 LAS VEGAS, NEVADA – DECEMBER 09: Colin Miller #6 of the Vegas Golden Knights skates with the puck against the Dallas Stars in the second period of their game at T-Mobile Arena on December 9, 2018 in Las Vegas, Nevada. The Golden Knights defeated the Stars 4-2. (Photo by Ethan Miller/Getty Images)