The Washington Capitals have agreed to trade forward Andre Burakovsky to the Colorado Avalanche in exchange for forward Scott Kosmachuk, and a second and third round pick in the 2020 NHL Draft.

The 2018 Stanley Cup champions completed a trade Friday with the Avalanche. The Caps acquire Scott Kosmachuk, and a second and third round pick in the 2020 NHL Draft in exchange for the young Burakovsky.

In Burakovsky, the Avs get a quick, skillful forward, that never found a permanent spot with the Capitals. This season, he scored12 goals and 13 assists for 25 points, adding 14 minutes in penalties. His possession numbers were 48.5 percent Corsi and a relative Corsi of -0.4.

Burakovsky has spent the first five years of his career with the Washington Capitals. He has put up 62 goals and 83 assists for 145 career points in 328 career games. Burakovsky has picked up 9 goals and 9 assists for 18 points in 56 career Stanley Cup Playoff games.  He was originally drafted, 23rd overall of the 2013 NHL draft by the Caps.

“We are excited to be adding a big, fast, skilled winger like Andre,” said Avalanche Executive Vice President / General Manager Joe Sakic in a press release. “He already has a lot of NHL experience at a young age and is a Stanley Cup winner who has performed well in the playoffs. At just 24 he is entering the prime years of his career and we feel with an added role, he will be a great addition to our team.”

Critics proclaim that Burakovsky is an underwhelming first round pick. However, the Austrian native has the skill and potential to be an asset to his new team.  With quick feet and silky stick handling, the young forward can easily be a top-six level in the right environment. And is versatile enough to slot into the Colorado lineup with minimal effort.

The Capitals have trimmed some payroll in order to keep some of their lineup together for another Stanley Cup push. 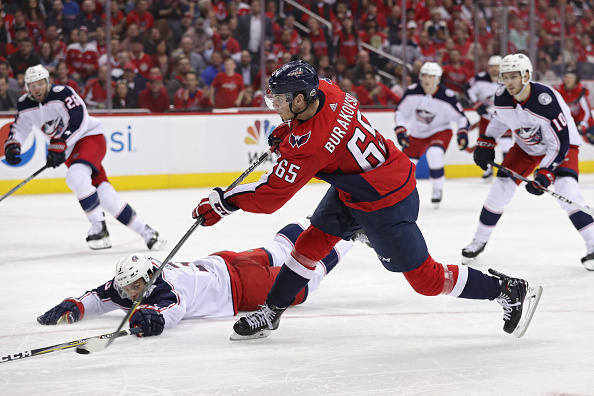 WASHINGTON, DC – APRIL 12: Andre Burakovsky #65 of the Washington Capitals shoots in front of Seth Jones #3 of the Columbus Blue Jackets in the second period in Game One of the Eastern Conference First Round during the 2018 NHL Stanley Cup Playoffs at Capital One Arena on April 12, 2018 in Washington, DC. (Photo by Patrick Smith/Getty Images)