The Vegas Golden Knights have agreed to trade forward Erik Haula to the Carolina Hurricanes in exchange for prospect Nicolas Roy. News of the trade was broken by The Athletic’s Jesse Granger.

Breaking news: The Golden Knights have traded Erik Haula to the Carolina Hurricanes in exchange for prospect Nicolas Roy, multiple sources confirm with The Athletic.

The Golden Knights completed a trade late Wednesday with the Hurricanes. Carolina gets winger Erik Haula in exchange for prospect Nicolas Roy.

In Haula, the Hurricanes get a creative playmaker that can play on both ends of the ice. This season, he scored two goals and five assists for seven points in only 15 games, adding 10 minutes in penalties. His possession numbers are 62.6 percent Corsi and a relative Corsi of 5.8. Those totals were down compared to the 2017-18 season, where he scored 29 goals, 26 assists for 55 points in 76 games.

Over his six-year NHL career Haula has played for the Minnesota Wild and the Vegas Golden Knights. In that time, he has 73 goals and 78 assists for 151 career points in 357 career games. Minnesota originally drafted him in the seventh round, 182nd overall of the 2009 NHL Draft.

Roy is a power-forward that hasn’t scored in seven games spread across two seasons. He was a key part of the Charlotte Checkers Calder Cup winning squad. The Amos, Quebec native scored six goals in the post-season.

Vegas continues to try to pair down salary to get under the $81.5 million cap for the upcoming season. The Golden Knights are over by more than $8 million according to CapFriendly. However, Haula being traded will save the club $2.75 million. Expect Vegas to make more moves to try to get under the cap number.

Carolina gets a solid forward that almost scored 30 goals in 2017-18. He did miss time with a devastating leg injury. The Hurricanes hope he can be ready to contribute right away.

Roy will likely go from the Calder Cup winners to the Chicago Wolves, who Charlotte beat to win the title. 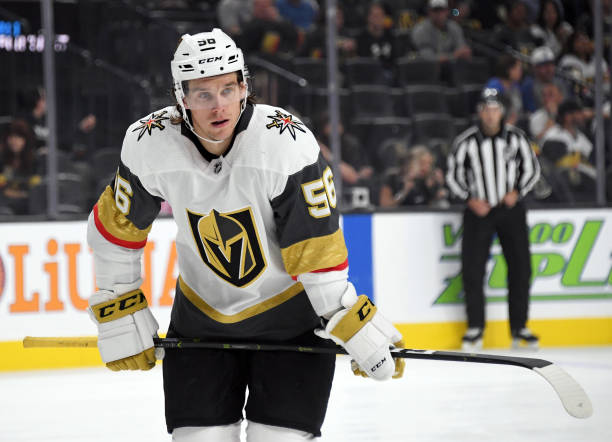 LAS VEGAS, NEVADA – OCTOBER 26: Erik Haula #56 of the Vegas Golden Knights waits for a faceoff in the first period of a game against the Tampa Bay Lightning at T-Mobile Arena on October 26, 2018 in Las Vegas, Nevada. The Lightning defeated the Golden Knights 3-2. (Photo by Ethan Miller/Getty Images)