The Nashville Predators already stated that Juuse Saros will be their next goalie. He and fellow Finnish goalie Pekka Rinne form one of the best 1-2 punches in goal in the NHL. He started 31 games this season and came in relief for Rinne twice. Once during the regular season and another time during the post-season.

Rinne has been known for eating up loads of starts during his tenure in the Music City. However, Saros has been slowly working his way into the net. He went 17-10-2 with a 2.62 goals-against average and .915 save percentage. Saros also registered three shutouts this season for the Predators.

However, there were times the 24-year-old looked inconsistent. There were times he looked like a future Vezina Trophy candidate, but he struggled at points as well. Saros enters his fourth season looking to take a big leap in his game.

The 2018-19 season showed glimpses of promise, but he did take a step back in terms of save percentage and goals-against average. An ideal save percentage is around .930 and Saros wasn’t close to repeating that.

Another statistical concern was his high-danger chances save percentage went down to 80-percent from 84.17 in 2017-18. That percentage was better than Rinne’s that season. It was a small sample size, but it wasn’t great. Elite goalies usually excel in those high-danger situations.

The Predators would like him to be better so they can feel secure in their future top netminder. However, the entire team was inconsistent this season, so Saros’ struggles could be a by-product of that.

The good news for Preds fans is that there is no immediate rush to get Soros in the net.  Pekka Rinne is the incumbent starting goalie and not likely going anywhere in the near future.

The 36-year-old has two more seasons to try to get that elusive Stanley Cup before he retires or moves on. Rinne’s numbers weren’t as good as his Vezina-winning season, but that was too be expected. The veteran netminder did plenty to get the team its second straight Central Division title with plenty of big saves. He was one of the best in the league at stopping high-danger chances with an 86-percent success rate.

Rinne did his best to keep the Predators alive during their first-round exit to the Dallas Stars. He helped Nashville build a 2-1 series lead before the Stars took over to win the series.

What it Means For the Future

Having Saros take a step forward would be immense for Nashville. He would ease any fears that fans have about the post-Rinne era. While Soros should expect to see a similar amount of action next year, a hot start could see him feature in more games. He’d also be able to give Rinne more of a break and have him rested for the playoffs. Head coach Peter Laviolette would love to lighten Rinne’s workload in their chase for the Stanley Cup. And Pred’s fans would love to know the future of Nashville’s goaltending is secure. 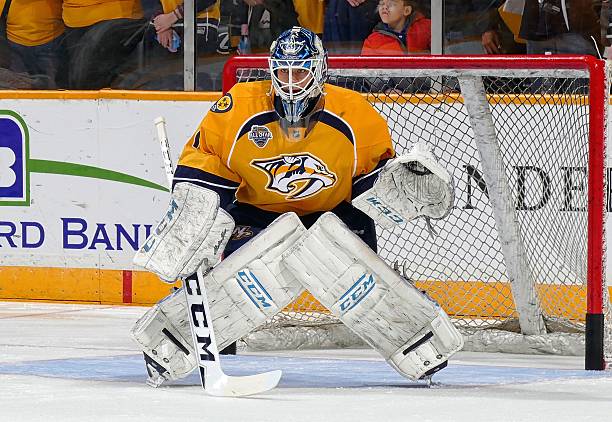