The Nashville Predators have rallied to grab a two games to one series lead over the Dallas Stars after a 3-2 win in Game 3. Pekka Rinne stopped 40 shots as Nashville got a game-winning goal from Mikael Granlund in the third period.

The Predators are looking to win a playoff series for the fourth straight season. They have received good goaltending and goals from different sources. Here’s a look at how the Nashville Predators are leading the Dallas Stars in the opening round.

Last season’s post-season was forgettable for the Finnish goalie. He won the Vezina Trophy but struggled in last year’s second-round encounter against the Winnipeg Jets. Rinne had a decent season but was going up against a red-hot Ben Bishop.

Rinne stopped 26 shots in Game 1 and 20 in Game 2 but logged his best game in Game 3. He had numerous key stops against the Stars, including several from close range. Bishop struggled to handle long shots from Rocco Grimaldi and Granlund that accounted for two of the Predators’ goals.

Nashville’s veteran goalie has a lot to prove this post-season and he helped his club get a huge road win.

In the series preview, it was mentioned that both teams have great top-line forwards. However, both squads’ depth scoring was wanting. Both teams tallied goals from their top players in the opening game, but the Predators have scored goals from unlikely places in the next two.

Grimaldi is Nashville’s leading scorer and tied with Mats Zuccarello for the series lead in goal-scoring. Craig Smith supplied the overtime-winner in Game 2 and Granlund potted the winner in Game 3.

The depth scoring is a good sign since goals are at a premium so far. Nashville got those depth goals in their run to the finals two years ago. They’ll need it if Brian Boyle and Wayne Simmonds are gone long-term. Dallas will need to start getting goals from players other than Alexander Radulov, Tyler Seguin, and Jamie Benn if they want to even up the series.

The Predators’ struggles with the power play have been well-documented. Nashville is 0-for-8 so far with the man advantage. Dallas was also a middle-of-the-pack power-play unit as it was tied for 17th. However, the Stars have struggled as well as they are 1-of-13 with the extra skater.

Both teams have the firepower that put up goals, but both can’t seem to score with the extra man. Rinne and Bishop have both stopped a lot of shots, but both teams need to convert those chances.

It’s shaping up to be a close series and a team getting its power play going could spell the difference between advancing or getting a tee time.

We had this series going seven games with Nashville winning and we’re still sticking with that. Dallas still has plenty of fight in it and will be making it a close and hard-fought series. 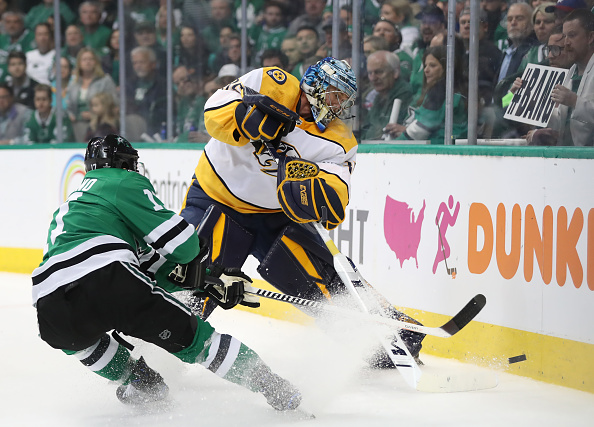 DALLAS, TEXAS – APRIL 15: Pekka Rinne #35 of the Nashville Predators skates the puck off the boards against Andrew Cogliano #17 of the Dallas Stars in the first period of Game Three of the Western Conference First Round during the 2019 NHL Stanley Cup Playoffs at American Airlines Center on April 15, 2019 in Dallas, Texas. (Photo by Ronald Martinez/Getty Images)