The situation surrounding the Detroit Red Wings goalies is a lot different than what people thought. Many speculated that Jimmy Howard would have been traded at the 2019 deadline. Jonathan Bernier was signed as a veteran backup that could have stepped in if Howard was dealt.

However, Bernier faltered, and Howard was re-signed to a one-year extension. The Red Wings look to be set in net for the 2019-20 season, but there are questions about the future. Detroit does have Filip Larsson ready to compete for a starting spot in Grand Rapids of the AHL. However, prospects are thin beyond that.

Patrick Rybar and Harri Sateri were the goalies for the Griffins, but Sateri left for the KHL. Rybar is a restricted free agent and that leaves the door open for Larsson to get plenty of chances. Detroit, though, may look to supplement their goalie future via the upcoming draft.

Howard is the veteran that will be the unquestioned No. 1. His name has been in trade rumours plenty of times plenty of times. However, he was called upon to be the steady force of a defence going through growing pains. The Ogdensburg, New York native went 23-22-5 with a 3.07 goals against average and .909 save percentage. Those numbers are a little deceptive considering the team’s defensive struggles.

Detroit could have gotten something for Howard, but then general manager Ken Holland gave him the contract extension. New general manager Steve Yzerman could still deal him to speed along the rebuild, but Howard is the steady force in a team still in flux.

Bernier was signed as a veteran option and could have been a temporary starter if he would have played better. The 30-year-old struggled in 35 games with a 9-18-5 record, 3.16 GAA and .904 save percentage.

It was a far cry from how he performed with the Colorado Avalanche in the 2017-18 season. He seemed like a good backup option at the time after winning 19 games, but his struggles made Red Wings head coach Jeff Blashill go with Howard.

He’s under contract for two more years and can be a good No. 2 goalie. He’s going to have to pick up play if he wants more time in net.

The young Swede started his 2018-19 season with a groin injury that delayed his season-debut to November. He had a strong season with the University of Denver as he guided the Pioneers to the Frozen Four. The Stockholm native went 13-6-3 with a 1.95 GAA and .932 save percentage. He also registered four shutouts with the Pios.

Larsson will start next season with the Grand Rapids Griffins and compete for the starting job. He’s shown plenty of promise in college and is currently labeled the team’s best goalie prospect.

Kaden Fulcher got to play in the NHL this season as he came in relief of Howard during the final week of the season. He was subsequently sent back to Toledo of the ECHL and was part of the team that made the Kelly Cup Final.

The 20-year-old backed up Pat Nagle in the post-season but could get time with the Walleye or the Griffins if needed.

The 6-foot-5-inch goalie was the backup to Andrew Shortridge at Quinnipiac University in the NCAA. He played in 14 games and went 8-3 with a 2.42 GAA and .904 save percentage.

Petruzelli will likely get more time in net as Shortridge signed with the San Jose Sharks. The Bobcats are usually in the mix for the ECAC title and make the NCAA tournament. He’ll get plenty of chances to gain more seasoning against high-level competition.

Adding Through the Draft

Yzerman could add more goalies to the prospect pool in the draft. He’ll likely add a forward or a defenceman with the sixth pick, but he may look to pick a goalie or two.

Helene St. James of The Detroit Free Press speculated that the Wings should select a goalie later in the draft. Spencer Knight is the best available North American goalie but should give Danish prospect Mads Sogard a look. He’s 6-foot-7 and was solid with the Medicine Hat Tigers on the WHL.

What Does the Future Hold

Howard and Bernier will likely hold the crease for the next season or two, but the future is unknown after that. Larsson. Petruzelli and Fulcher will get their reps in the minors or college. However, there’s uncertainty if they can be NHL-level goalies.

Yzerman has the tools to rebuild the team in time with a young group of forwards and defencemen. Detroit does need to solve the goalie question sooner or later. 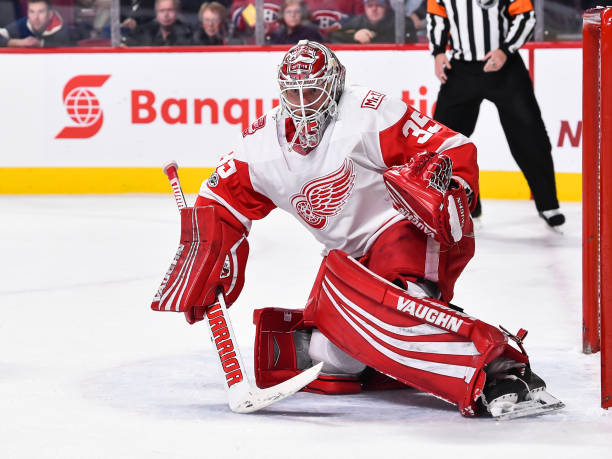