Denver University played its third straight Frozen Four and just missed out on reaching the National title game. The Pioneers fell to the runner-up Massachusetts Minutemen, 4-3, in overtime. However, Denver goalie Filip Larsson had a big tournament. He helped stay close with 24 saves before UMass got the winner.

The 20-year-old goalie powered the Pioneers with a pair of shutouts over Ohio State and American International in the first two rounds of the tournament. Larsson now heads to his next challenge as he signed a three-year, entry-level contract with the Detroit Red Wings. Detroit drafted the Swede in the sixth round, 167th overall of the 2016 NHL Draft. He had just completed his freshman season.

The #RedWings today agreed to terms with goaltender Filip Larsson on a three-year entry-level contract. The contract will begin with the 2019-20 season.

Larsson missed the first two months of this season with an injury but stormed back to earn NCHC goalie of the month for December. The Stockholm native went 13-6-3 with a 1.95 Goals Against Average and .932 save percentage. He also registered four shutouts with the Pioneers.

Larsson came into college after being named the USHL’s Goalie of the year after spending 2017-18 with the Tri-City Strom. He’s also won a gold medal with Sweden at the 2018 IIHF World Junior Championships.

The Future of Detroit’s Net

Adding Larsson to the organization may answer concerns about who will be the goalie of the future. Many have considered the young netminder the top goalie prospect in the organization and he may get the chance soon.

Jimmy Howard signed a one-year extension to remain with the team despite being trade bait throughout the season. Howard just turned 35 and may not have many seasons left. The Syracuse native didn’t have a great season as he went 23-22-5 with a 3.07 GAA and .908 save percentage. Jonathan Bernier was the backup but didn’t put up big numbers. Bernier went 9-18-5 with a 3.16 GAA and .904 save percentage.

Larsson is eligible to play for the AHL Grand Rapids in the Calder Cup playoffs. He’ll join Patrik Rybar (25-years-old) and Harri Sateri (29) as goalies on the team. The former Denver goalie could play a part in the Griffins series against the Chicago Wolves.

He could battle Keith Petruzelli for the future of the Red Wings’ goal. A decision about the future needs to happen soon because of the age of Howard and Bernier. Either goalie could be the centre of a young and revived Detroit squad.

Larsson gives another option for the future in goal. General manager Ken Holland has one year left on his deal but has been really focusing on the team’s future even if he may be part of it. He’s had solid drafts the last couple of seasons and picked up solid picks and prospects.

Their newly-signed goalie has been called a sleeper prospect, but he could be an awakening in goal for Detroit. Larsson may spend the next season in the AHL, but he could be patrolling the blue paint soon in Hockeytown. 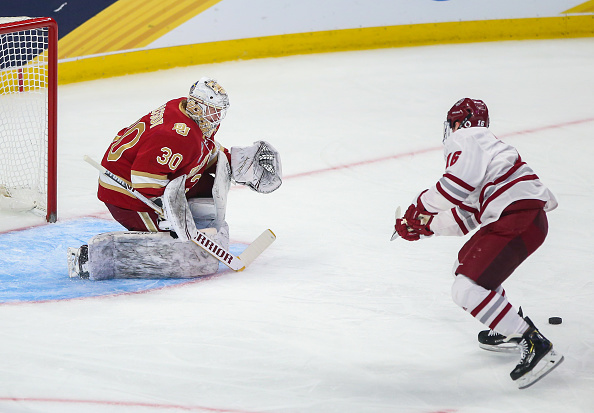 jBUFFALO, NY – APRIL 11: Massachusetts Minutemen Defenseman Cale Makar (16) has his stick lifted as he get set to take a shot on Denver Pioneers Goaltender Filip Larsson (30) during the semifinals of the NCAA Men’s Frozen Four game between Massachusetts Minutemen and Denver Pioneers on April 11, 2019 at KeyBank Center in Buffalo, NY. (Photo by Jerome Davis/Icon Sportswire via Getty Images).