.The San Jose Sharks Stanley Cup quest continued after beating Colorado Avalanche after a 3-2 victory in Game 7. San Jose rode the return of their captain Joe Pavelski and an excellent performance by goaltender Martin Jones. The Sharks advanced to the franchise’s fifth conference title appearance. Wednesday’s win over the Avalanche was the second game 7 win for the Sharks of the playoffs so far.

Taking on the St. Louis Blues in the Western Conference Finals, the Sharks are battle tested. Their experienced group has been pushed to the brink in their previous two series. However, they may just be reaching their full potential as a team. San Jose boasts a mix of experience and youth. This might be the best team that general manager Doug Wilson has ever put together.

The Sharks have played well and rode some fortune through two playoff series. This 2019 post-season may finally be the year they break through and capture that ever-elusive first Stanley Cup.

Is It Finally The San Jose Sharks Stanley Cup Season?

It is well known that a lot of NHLers choose to play through injury in the Stanley Cup playoffs. For San Jose, it is known that their players are dealing with a similar push.

One of the Sharks most important players, Erik Karlsson, came into the playoffs dealing with a lingering groin injury and it is speculated that he is still feeling the effects. Karlsson has put up an impressive 12 assists in the postseason but his defensive efforts have been equally as poor. Another pre-playoff injury on the Sharks blue-line was San Jose’s rookie of the year Radim Simek. Simek announced he would have knee surgery in mid-March, effectively ending his season. He likely would have filled valuable minutes when Marc-Edouard Vlasic went down in game 2 of the Vegas Golden Knights series. The Sharks allowed 16 goals in the three games that Vlasic missed time.

If the pre-existing injuries weren’t enough, the Sharks lost two other key contributors midway through the first round. Vlasic, Pavelski and Joonas Donskoi all – at one point – exited the Sharks opening round against the Golden Knights and missed a combined 16 games as a result. That’s an extended period of time in which San Jose was missing its captain, best defender, and a valuable depth player.

Injuries are a part of the playoffs but the Sharks have done a great job of coming together despite their lack of bodies. Going into the third round, San Jose will be as healthy as they can hope to be at this time of the year.

The Continuing Emergence Of Youth

It’s easy to forget how much the San Jose lineup has changed since this core reached their first conference final in 2011. Wilson continues to restock the team with young players. That team was headed by a different starting goalie, Joe Thornton was the team’s #1 centre, and their leading scorer during the regular season was Patrick Marleau. The window always appears to be closing. However, Wilson continually injects youth and unknown names into the lineup to keep it open.

This year Timo Meier has broken out and become one of the league’s emerging snipers but the name that has stuck out the most in the playoffs has been Kevin Labanc. Labanc has been a member of the Sharks for three seasons now. He is having his coming out party in the 2019 Stanley Cup Playoffs. Though Labanc only has six points throughout the playoffs, he is contributing in clutch moments. He may be the best third line of the remaining playoff teams. He and Meier are also mainstays on the powerplay. Labanc contributed four points in San Jose’s miracle third-period game 7 comeback win against Vegas and scored one of the best goals of the playoffs in game 1 against the Avalanche.

In a group that is almost exclusively led by veterans, Meier and Labanc have been two of the most important players during the Sharks playoff run. Both have taken over games on their own. They should continue to be a spark for San Jose to build off of.

Though the Sharks have seemed to hit a wall with all their past playoff disappointments, the last couple of playoffs have proved anything is possible. The Sharks former captain Thornton, current captain Pavelski and debatable Conn Smythe leader Logan Couture, have all been through this before. They were there when the group reached the conference final in 2011. They were all integral parts of the Sharks run to the 2016 Cup Finals. The trio is still having a huge impact in 2019. They bring a level of experience that should assist them in overcoming the same team they beat in 2016.

Milestones also showcase the kind of work this Sharks team has put in over the years. Thornton registered his 100th career playoff assist in the Sharks Game 1 win over Colorado. He, Couture and Pavelski are close to special achievements of their own. Couture (95) and Pavelski (97) are highly likely to eclipse the 100 playoff point milestone in this year’s post-season. In net, Jones is steadily rising up the all-time playoff wins leaders. He secured his 30th career victory in San Jose’s second-round clinching game.

For comparison, The Blues’ leading playoff scorer is Jaden Schwartz with 41 points in 62 games and have been riding a hot rookie, Jordan Binnington, through their late-season surge. Not a bad thing, but a difference.

The Stanley Cup Playoffs in 2019 have proved to be almost the most unpredictable ever. It still doesn’t mean that playoff experience is a null and void. Just one year after the Washington Capitals bucked their curse, it may be San Jose’s turn. The Sharks core has been through the playoff gauntlet multiple times and is ready to put it all together.

It’s easy to say that if the Sharks can’t take home the Stanley Cup this year, it may never happen. However, that narrative has been playing out for what feels like half a decade and has never been validated. The added narrative of Thornton’s quest for his first ring applies to the urgency. However, at the same time, no one can definitively say the Sharks window is closing.

A lot of people are cheering for the future Hall of Famer Thornton to capture his first Cup. This may be the year the Sharks can make it happen. 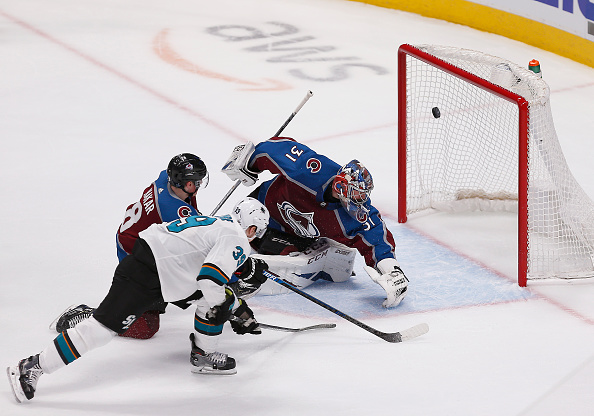 DENVER, CO – APRIL 30: San Jose Sharks center Logan Couture (39) beats Colorado Avalanche defenseman Cale Makar (8) and goalie Philipp Grubauer (31) for the first goal in the first period of a Western Conference match-up between the Colorado Avalanche and the visiting San Jose Sharks in the second round of the Stanley Cup Playoffs on April 30, 2019 at the Pepsi Center in Denver, CO. (Photo by Russell Lansford/Icon Sportswire via Getty Images)