Another Game 7 for the San Jose Sharks, and another big moment of Joe Pavelski. The Sharks captain got hurt in their last Game 7 exactly 15 days ago. His return was just in time for the Game 7 of the second round. In the battle of two banged-up stars, Pavelski on one side and then Nathan MacKinnon on the other, the Sharks made it to the Western Conference final. The emotional Pavelski return was the spark needed for San Jose in their Game 7 victory.

Before this series started, we expected a very tough battle. The Colorado Avalanche came to play after they eliminated the Calgary Flames in five games in the first round. However, the Sharks had the story of their own. In the first-round series versus the Vegas Golden Knights, they were 3-1 down in the series and then 3-0 down in Game 7. San Jose found a way to overcome these obstacles to advance.

Entering the series with the Avalanche, the Sharks had to play without Pavelski. The captain didn’t play well against the Golden Knights, but his presence of his leadership was bigger. However, the Sharks have found a way how to succeed even without him. With obvious head injury from that Game 7 against Vegas, Pavelski was uncertain to return to the Sharks lineup. Maybe for the rest of the playoffs.

“I missed [playing]. I come out, score early. It was a lot of emotion.”

The Sharks promised to make their best effort to play long enough for the beloved Pavelski to come back and play again this season. And before another Game 7, Pavelski returned. Pavelski’s return was much-need for San Jose. In Game 7, he opened the scoring and provided Tomas Hertl with an assist. In these circumstances, it was his best performance during this playoffs and it couldn’t come at a better time.

The Sharks had a clear upper-hand in the experience edge over the Avalanche. Just look at 39-year-old Joe Thornton or many other Sharks players, who remember the trip to the Stanley Cup final in 2016. On the other side, mainly in the defence, young blueliners Nikita Zadorov and Samuel Girard played in their just second postseason.

Cale Makar made his NHL debut just three weeks earlier in Game 3 versus the Flames. Tyson Barrie was playing in his just third postseason with Colorado. The Avalanche hadn’t won a playoff series in more than a decade before this spring. They have certainly shown resilience and calmness, but it wasn’t enough. The Sharks demonstrated their expereince edgeGame 7 and also in Game 5 with the series tied.

In Game 6 with the occasion to close out the series, the Sharks came back three times to even up the game. At the end of the day, it was a very close series. However, the Sharks experience was too much. In Game 7, the Avalanche looked lost at the start of the game. The Sharks kept winning the board battles and scored two goals. That early hole 2-0 was too much to recover from for the Avalanche.

Maybe after the series, the Avalanche will come back and mourn that offside challenge from the second period of Game 7. They also will rue their missed power play chances. In the series, they went 2-for-23 on the man advantage. They did a tremendous job on the penalty kill, as Colorado killed 19 out of 21 of San Jose’s power play opportunities.

They started Game 7 on the power play. Not only they got nothing out of it, but Joe Pavelski also tipped the puck behind Philipp Grubauer to open the scoring. In the third period of Game 7 after Tyson Jost cut the lead. However, they missed another opportunity on the man advantage. It was a turning point of that third period after the Avs started out flying on the ice. During most times, the power play killed all the momentum the Avalanche had as they had a tough time to gather another gear of the momentum.

With San Jose dominating on the penalty kill, the Sharks knew they have the advantage at even strength. During the even-strength play, the Sharks had the CF% at 52.08 against 47.92 of the CF% for Colorado.

Led by Their Veterans and Joe Pavelski, the Sharks Are Back In The Mix

Brent Burns had unbelievable 10 points to lead his team in scoring. Logan Couture had a hat trick in Game 3 and six points overall. After struggling in the first round, Timo Meier responded with six points and Gustav Nyquist was much more impactful with his five points.

From the Sharks perspective, the Avalanche were kept at the bay. Mikko Rantanen and MacKinnon, who combined for 17 points in five games versus Calgary, just had 10 points in seven games. The Sharks showed poise, clutchness and the experience at the most important time to win this series. As we highlighted in the series preview, the Sharks would advance and they did.

Now the Sharks will play in the Western Conference final for the first time in three years. They will meet the same opponent as back then, the St. Louis Blues. On the other side, the Avalanche can be proud of what they have achieved and build on that headed to the future. They believe that the future is brighter than ever in Denver. 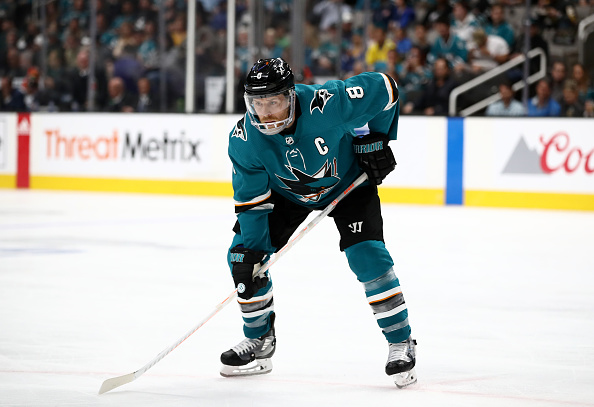 SAN JOSE, CALIFORNIA – APRIL 18: Joe Pavelski #8 of the San Jose Sharks in action against the Vegas Golden Knights in Game Five of the Western Conference First Round during the 2019 NHL Stanley Cup Playoffs at SAP Center on April 18, 2019 in San Jose, California. (Photo by Ezra Shaw/Getty Images)