Going against the flow of play, the San Jose Sharks pulled out a 2-1 double-overtime victory against the Vegas Golden Knights Sunday night to remain alive in the Stanley Cup Playoffs. The victory was largely imparted to an incredible 58 save performance by goaltender Martin Jones, and a Tomas Hertl short-handed game-winning goal. San Jose was badly outshot all game but managed to hang in the game long enough. That one break helped them get the victory after over 91 minutes of hockey.

The Sharks will now return home Tuesday night for a Game 7 showdown. This gives San Jose a chance to erase their franchises first ever 3-1 series deficit. With all the past playoff failures behind them, San Jose is now faced with an opportunity to exercise their demons. The Sharks typically struggle with opportunities to close out playoffs series however, they are 6-4 all-time in game sevens.

After coming up short so many times in the past, the Sharks matchup with the Knights Tuesday night could kickstart a Sharks Stanley Cup run or potentially sink the Sharks core group to a depth they can never escape.

Since the lockout, the Sharks have played in five game-sevens. They have gone 3-2 in these matchups. It’s a solid record, but two series are noted for one specific reason; San Jose had a 3-0 series lead to begin.

In 2011, the Sharks took a 3-0 lead against the Detroit Red Wings before dropping three straight games to force a game seven at home. San Jose escaped with a 3-2 victory to take the series and advance to its second conference final in as many years. Against the Los Angeles Kings, the decision went the other way. After winning their third game in a row, the Kings thumped the Sharks, 5-1, in Game 7. That was only the fourth 3-0 series comeback in NHL history. One year after being eliminated by the Kings in seven games in 2013, San Jose managed to crash out in an even more embarrassing fashion.

The Sharks have only been down 3-2 in a series that went the distance once. That was 2013 against LA. The Sharks dropped that Game 7, 2-1. While this may not seem like a deal, the current Sharks core simply haven’t had to ever crawl out of a hole like the one were in against Vegas. Their most important Game 7s have been rebound games. Hertl’s game-winning goal in Game 6 showed a lot of backbone from the Sharks. History tells us the Sharks should have the upper hand. However, most of their players have never played in a game like the one they will play on Tuesday.

Thornton Is Running Out of Time

For the last couple of seasons, it seems like everyone believes that if the Sharks are able to win a cup, Joe Thornton will retire on top of the hockey world. Now at age 39, it is a fair assumption. Thornton had a solid 2018-19 season, after an injury muddled 2017-18. He recorded 51 points, including 35 assists, in 73 games. So far in the playoffs, he has registered a goal and three assists. He had a point in each of the first four games of the series. Neither his regular season or playoff performance jumps off the page. However, he is proving to still be a solid contributor at the NHL level.

As the series between the Sharks and Knights has progressed, Thornton has looked good but his age has shown. At 6’4″ 220 lbs, Thornton can still use his size to ford off defenders but everyone’s body wanes with time. This was perhaps best exhibited in Game 6. Thornton was exhausted after 20:51 of ice time, including four-and-a-half periods. Every player gets exhausted in a 90-minute game, but Thornton’s age showed. His hockey IQ and experience is what helps him through the majority of these tough types of games.

No matter how much gas Thornton has left in the tank, the Sharks will not be the same moving forward. He’s been an impact player whether it’s on the first, second or third line. That presence shows up on a nightly basis. The Sharks need to pull together to win this year because Thornton may be the best player in NHL history to never win a Stanley Cup.

The West Is Wide Open

The Sharks have had their fair share of disappointments over the years. However, they have a chance to do a lot of damage if they can escape Game 7 with a victory. The Nashville Predators are on the verge of being the second division champion to be knocked off in the West and even if they make it out of the first round, have looked shaky, to say the least. San Jose owns an 8-3 record against the teams remaining in the West, minus Vegas. If the Dallas Stars beat Nashville at home on Monday night, every western team in the second round will have been a lower seed.

The winner of the Sharks and Knights series will take on the eighth-seeded Colorado Avalanche, a team the Sharks did not lose to this past season. San Jose went 3-0 against Colorado this year including a decisive 5-2 victory in game-82 of the regular season. Nathan MacKinnon had a standout first round against the Calgary Flames but the Avalanche provide a significantly better matchup than the Knights. Vegas is – on paper – a far deeper team than Colorado. Their top-line shows maybe even more production than could be expected out of Mackinnon’s line. If the Sharks could give up 28 points to the Mark Stone, Paul Stastny, Max Pacioretty line and still escape with a series win, they can weather the Colorado attack.

There are a lot of new faces around the playoffs this year after so many upsets. This may be a really good time for San Jose to capitalize.

The result of Tuesday nights game-seven is going to say a lot about the Sharks current core of players. Gone are the days of Thornton, Patrick Marleau, Antti Niemi and Dan Boyle leading the charge and the new regime needs to show some character at this point in their season. San Jose has been tossed around in multiple games this series. They need to put a better effort forward if they hope to move on to the second round.

A win in Game 7 against Vegas would be one of the biggest victories in Sharks franchise history. 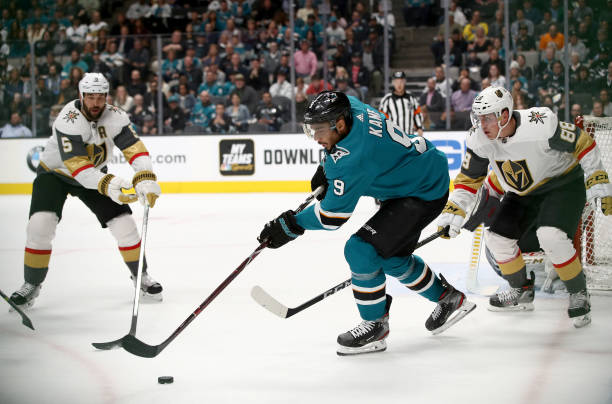