The Buffalo Sabres won’t have their young forward Alex Nylander when they will take on the Ottawa Senators on Thursday. The Sabres have announced that Nylander is day-to-day with a lower-body injury. Swedish winger also received stitches for a cut on the back of his leg.

Alex Nylander is out with a lower-body injury.

He received stitches for a cut on the back of his leg and is day-to-day.

The Sabres have still two more games left in the regular season. They have lost eight straight games ahead of tonight’s clash with the Senators. It will also be their final home game of this season. Nylander has skated in 12 games so far with Buffalo in the NHL, collecting two goals and two assists.

The 21-year-old winger has also played in 49 games with the Rochester Americans in the AHL. He has tallied 12 goals and 19 assists for 31 points in those 49 contests. He will probably miss both of the final regular season games for the Sabres, but they expect him to be healthy for the AHL playoffs. Nylander is former eighth pick overall in the first round of the 2016 NHL Draft. He has taken part of 19 NHL games collecting six points.

What Does This Mean For The Future

During his last game on Tuesday night at KeyBank Center versus the Nashville Predators, Nylander skated on the third line with Casey Mittelstadt and Conor Sheary. Scott Wilson will take Nylander´s spot on that offensive line. Forward Zemgus Girgensons will make his way back to the lineup on the fourth line.

The Sabres will play their final regular season game on Saturday night versus the Detroit Red Wings on the road. Buffalo now hangs on the 14th place in the Eastern Conference with 72 points. 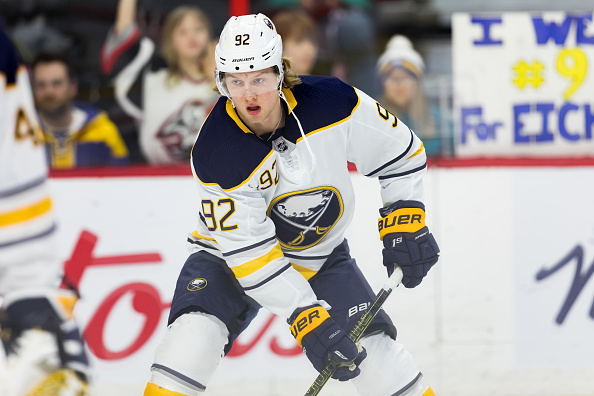 OTTAWA, ON – MARCH 26: Buffalo Sabres Right Wing Alexander Nylander (92) during warm-up before National Hockey League action between the Buffalo Sabres and Ottawa Senators on March 26, 2019, at Canadian Tire Centre in Ottawa, ON, Canada. (Photo by Richard A. Whittaker/Icon Sportswire via Getty Images)