The Detroit Red Wings first-round pick Filip Zadina wrapped up his first stint with the big club last week. He was sent back to AHL Grand Rapids. Zadina didn’t exactly light up the stat sheet as he had a goal and two assists in nine games.

Some hoped Zadina would have hit the ground running and put up points. However, the young Czech forward learned from his time in Hockeytown. The stint in Detroit has boosted his confidence as he tries to lead the Griffins to a Calder Cup.

Zadina came up as injuries were mounting on the Red Wings’ forward group. Other forwards have been brought up throughout the season, but the 19-year-old isn’t a player that can stick on the third or fourth line. He needs top-six minutes because he will be a fixture for the club on the first two lines.

He didn’t score in his first three games in Detroit and some were worried if he was ready for the big time. However, he scored a big one-timer against the Colorado Avalanche. Zadina picked up assists in two more games before being sent back to Grand Rapids.

Wings’ fans shouldn’t be worried about the young forward starting slow with a new team. Zadina struggled for the first few games in the AHL before he went on to represent the Czech Republic at the World Junior Championships.

He turned the corner with the Griffins as he registered points in seven straight games and nine of 10 from Jan. 26 to Feb. 22. The highly-touted player has 16 goals and 17 assists for 33 points in 50 games in the AHL. He’s already a key piece for head coach Ben Simon.

Comparing to Another Filip

Zadina going back to the AHL for more fine-tuning is reminiscent of another high-scoring Filip and that’s Filip Forsberg. The Swedish forward had a small taste of playing for the Nashville Predators but was sent to the Milwaukee Admirals in the 2013-14 season.

Forsberg scored 15 goals and dished out 19 assists for 34 points in 47 games. The former 11th overall pick of the Washington Capitals in the 2012 NHL Draft used the time with Milwaukee and got acquainted with the North American ice surface. He looked like he belonged in the NHL at the end of the season.

The Ostervala, Sweden native then hit the ground running in his first full season with the Predators with 26 goals and 37 assists for 63 points in 82 games. Forsberg took the lessons from the Admirals and made himself a better player. Zadina would do well to take a page from the other Filip’s book.

However, Zadina looks to be a special player. He still needs time to grow, but he has the tools to become a solid goal-scorer. This Detroit team is looking to contend in the next few years and Zadina will be a big part of it. The extra time in the minors may give the forward the tools he needs to succeed. 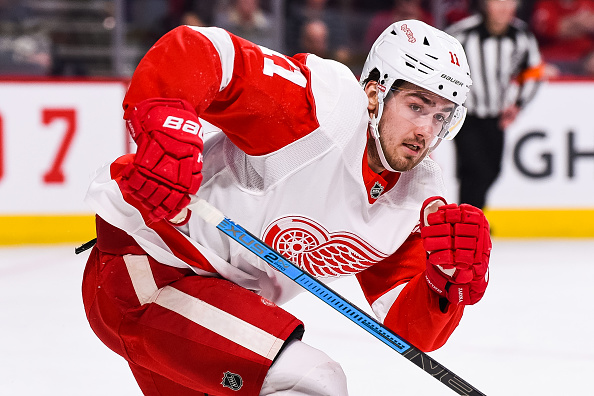