The Detroit Red Wings have announced Tuesday that defenseman Mike Green will be out 7-10 days with a virus. He will be out starting with Tuesday’s game at the Colorado Avalanche.

It's next-man-up time for the #RedWings with Mike Green out again. Here's who will be looked at to step up. https://t.co/QvsyTh1lXX

Mike Green Out at Least One Week

It is a reactivation of the virus that caused the veteran defenceman to miss the start of the 2018-19 season. The virus has been diagnosed with something to do with his liver and has caused Green to be fatigued and not show energy.

The Calgary native has scored five goals and 21 assists for 26 points in 43 games. Green also has to go along with 28 penalty minutes. His possession numbers are 49.4 percent Corsi and a relative Corsi of 1.5.

“Mike Green is out tonight, he’s had a reactivation of the virus that he had earlier in the season,” Wings coach Jeff Blashill said to the media earlier on Tuesday. “Right now, we expect him to be out 7-10 days. We’ll re-evaluate when we get back home. He’s got an appointment set up and we’ll see where it goes from there. I don’t have any more information than that.”

It’s been a trying year for Green with the virus and missing time with a lower-body injury in December. He has led the team in ice time when he has been healthy.

Trevor Daley does return to the lineup and Filip Hronek will likely quarterback the first power-play unit in place of Green. Forward Thomas Vanek will also return for the game against the Avalanche. 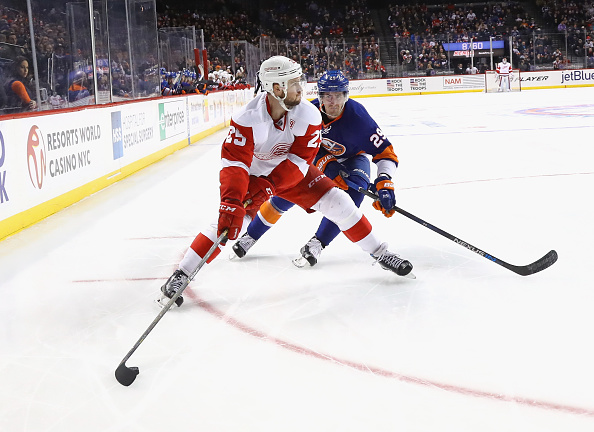 NEW YORK, NY – DECEMBER 04: Mike Green #25 of the Detroit Red Wings skates against the New York Islanders at the Barclays Center on December 4, 2016 in the Brooklyn borough of New York City. The Red Wings defeated the Islanders 4-3 in overtime. (Photo by Bruce Bennett/Getty Images)