The Chicago Blackhawks announced that goaltender Cam Ward will miss 7-10 days with a right knee injury.

And as I just tweeted, we won’t have to wait until tomorrow. #Blackhawks announced Ward is “out of all hockey activity” for 7-10 days (right knee injury). https://t.co/SjWjNvrpsa

There is no indication of how Ward suffered the injury. Ward’s last appearance came on Sunday night when he gave up four goals on 33 shots.

Over his 14-year NHL career, Ward has played for the Carolina Hurricanes and Chicago Blackhawks. He has put up a 332-255-88 career record in 698 career appearances with 595 career starts. He also has a 2.74 goals-against average, .908 save percentage, and 27 shutouts. Ward was originally drafted 25th overall in the 2002 NHL Draft by the Hurricanes.

With Ward being off the ice for at least it week, it’s expected that his timeline to return may be a bit longer. Corey Crawford should expect to see a bulk of the starts moving forward for the Blackhawks. There is no question that the two goaltenders could be sharing starts for the rest of the year once this returns. Since coming back after missing a few months of action, Crawford has looked shaky. He’s 7-15-2 with a 3.38 goals against average, .897 save percentage and one shutout in 25 games this season.

In a corresponding move, the Hawks have called up Collin Delia on an emergency basis. Delia has played in 15 games this season for the Hawks putting up a 6-4-3 record in 15 games with 14 of those being starts. He has a 3.48 goals-against average and .909 save percentage in those games.

Ward is set to become an unrestricted free agent at the end of the season. With Crawford back in the picture for the Hawks, it will be interesting to see if the Hawks try and re-sign Ward in the off-season. 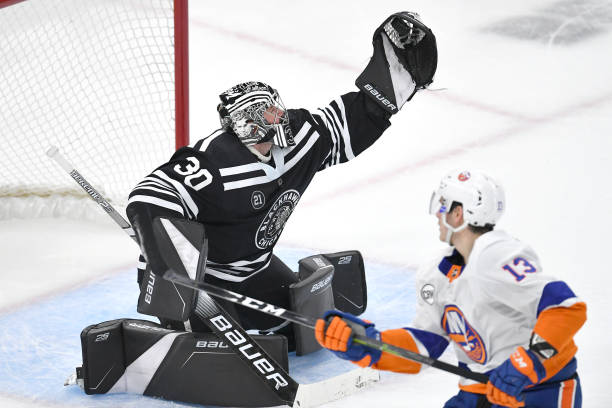 CHICAGO, IL – JANUARY 22: Chicago Blackhawks goaltender Cam Ward (30) saves a shot from New York Islanders center Mathew Barzal (13) during the shoot-out in game action of a NHL game between the Chicago Blackhawks and the New York Islanders on January 22, 2019 at the United Center, in Chicago, IL. (Photo by Robin Alam/Icon Sportswire via Getty Images)