The Chicago Blackhawks remaining schedule begins on the road Wednesday night against the Anaheim Ducks. The team has 19 games to go in what has been a roller coaster season. The Blackhawks started off hot to begin the season, went through a coaching change, drifted aimlessly until hitting rock bottom in January, and then went on a tear to claw back into the playoff picture. We are going to look at the Blackhawks remaining schedule and the teams they will face breaking down their chances to claim a wild card spot.

The Blackhawks enter Wednesday night with a record of 26-28-9 with 61 points. They currently sit five points out of the last wild card spot in the Western Conference. To make a serious challenge at a wild card spot the Blackhawks will certainly need to play better. The team finished their recent 10-4 run with several warning signs. They lost their last two games to the Colorado Avalanche and the Dallas Stars both at home. The Blackhawks also lost four of their last seven games overall. These four losses also signal problems for the Blackhawks. The four teams they lost to: Boston Bruins, Columbus Blue Jackets, Stars and Avalanche all had more size and speed and a rabid forecheck. Add those together and it spells disaster for a fragile Blackhawks team on most nights.

Listed below are the 19 games on the Blackhawks remaining schedule. We are highlighting the date, the opponent, their record this season, and the Blackhawks record against each team this year. After the schedule we will breakdown the games that will make or break their run to a wild card spot.

The six games against the Stars, Avalanche, and the Sharks also loom large on the schedule. Especially a home-and-home series against the Avalanche on 3/23 and 3/24. If the Blackhawks hope to secure a wild card spot these six games will be a huge part of their success or failure. Their 3-3-0 record against the Stars, Avalanche, and Sharks this season is hopefully a good sign for the team. Playing these three teams tough and winning in regulation is the key to make up ground in the standings.

The Blackhawks have a total of 11 of their final 19 games on the road. The Blackhawks current road record is 12-15-3. They will need to improve on that immensely the rest of the way for them to move up in the standings. Standing in their way however are two three game road trips out west on their remaining schedule. They begin their last 19 games on the road in Anaheim 2/27, then in Los Angeles 3/2, and finally in San Jose on 3/3. Their other three game road trip has games in Arizona 3/26, then in San Jose 3/28, and then in Los Angeles on 3/30.

The teams ability to focus while away from home on these two road trips is going to be a huge test. They cannot come home with less than two wins on each of the three game road trips. Winning 7 of the total 11 road games will also go a long way to competing for a wild card spot.

With only eight of their remaining games at home the team will need a magical run to say the least. Saying they need to run the table 8-0 at home is an understatement. Their current home record is 14-13-6 which is not great but not the worst compared to the teams ahead of them. The United Center used to be a difficult building to play in for visiting teams. The Blackhawks need to recapture that the rest of the way and win out at home.

Their last three home games are against some quality Western Conference teams currently in the playoffs. They play the Jets on 4/1, the Blues on 4/3, and then the Stars on 4/5. If the Blackhawks are still in the playoff hunt at that time those three games are must wins. After that they finish the season on the road in Nashville against the Central Division leading Predators on 4/6.

The Blackhawks remaining schedule presents a lot of challenges to the team. For them to make the wild card they will have to win on the road against some difficult teams. They will also have to go nearly undefeated at home to help secure a spot. The challenges facing them are daunting but not insurmountable.

The recent return of Corey Crawford from injured reserve may just be the spark this team needs. His return should be helpful while they hit the road on their three game road trip starting Wednesday. Coming home 3-0 would be a great start to their run. Do they have the ability to make it? We’ll know very soon what this team is made of for sure. 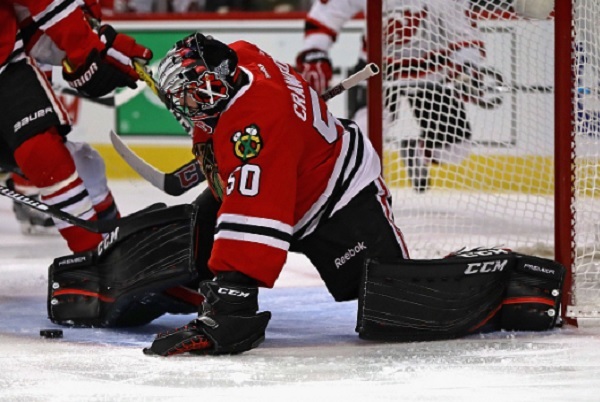 CHICAGO, IL – DECEMBER 01: Corey Crawford #50 of the Chicago Blackhawks makes a save with his leg against the New Jersey Devils at the United Center on December 1, 2016 in Chicago, Illinois. (Photo by Jonathan Daniel/Getty Images)