Calls for general manager Stan Bowman’s job were everywhere around town. On Twitter the hashtag #FireBowman was trending hard with fervor. After Bowman and team president John McDonough were quoted as saying “this is a playoff team” during their tailspin many wondered what team they were watching and where it was heading.

Many problems faced the team since the season began. New coach Jeremy Colliton replaced long-time coach and fan favourite Joel Quenneville. Colliton then installed his man-on-man defence scheme after taking over. Unfortunately the man-on-man has been a challenge and has at times failed terribly. The Blackhawks goalies were at times thrown to the wolves during games as they tried to defend against repeated point blank shots. Lately they have been playing a bit tighter defence as a team.

Another problem for team morale is that there have been rumors running rampant about the Blackhawks defence icons Brent Seabrook and Duncan Keith being asked to waive their non-movement clauses. Neither player has given credibility to the rumors and are probably going nowhere. Their contracts would require the Blackhawks to retain salary or take back an equally back anchor contract in return in a trade. For more on the Seabrook and Keith trade fiasco check out this from Brandon Cain of secondcityhockey.com:

“First it was Duncan Keith, and now Brent Seabrook is denying he’s been asked to waive his no-movement clause after a report surfaced saying he did.”

“NHL insider Elliotte Friedman of Sportsnet reported Saturday night that Seabrook was asked by the Blackhawks to waive his NMC, but the defenseman told media members after Monday’s practice at MB Ice Arena that he hasn’t been asked.”

The thought of the Blackhawks trading both of these defence stalwarts leaves one hugely concerned. They do not have anyone currently ready to replace Keith and Seabrook. The team’s defence corps has been suspect due to Bowman’s inability to draft NHL worthy defencemen since 2010. His lack of success at drafting has created an ever growing list known as “Bowman’s Busts” on defence. Now that Henri Jokiharju is back in Rockford that leaves Carl Dahlstrom as the only one on the defence squad drafted by Bowman. And the most recently drafted defence prospects are nowhere near ready for the show.

There have also been calls for the team to tank and go all in on the “Lose for Hughes” draft lottery by many locals. The tanking concept being put out on social media has been another distraction the team does not need. Luckily the Blackhawks core is a proud one and would never actively condone a tanking scheme.

Despite a very uncertain summer ahead with this roster, it was rumored the Blackhawks “are all in on Artemi Panarin” when he goes free agent July 1st. Based on the projected cap space after the season and multiple restricted free agents this summer, going all in on Panarin is certainly a fantasy without more cap space opening up. He would certainly demand a contract making close to Jonathan Toews and Patrick Kane‘s $10.50 million a season. His deal would certainly be long-term and would undoubtedly contain a non-movement clause. Adding another anchor contract for Bowman’s roster is exactly what this team does not need.

Despite all of the distractions around the team they have won seven games in a row. How did they go from dead last in the NHL to now 23rd out of 31 teams? Their resurgence to only four points out of a wild-card spot has been incredible. There were several factors in play even when they hit rock bottom on January 20th. Kane and Alex DeBrincat are two of the biggest.

These two forwards have been on fire for a while. Kane had just reached the top ten in scoring in the NHL when the team was struggling. He had 28 goals and 65 points on January 20th. Fast forward to today and he is now number two in the NHL in scoring. He has currently 33 goals and 81 points. At this pace he will be in the Hart Trophy discussion in the very near future.

DeBrincat has been just as hot as Kane. At the rock bottom point last month “The Cat” had 24 goals and 39 points. As of today he has 28 goals and 53 points. The second year sniper is third on the team in scoring only behind Kane and captain Toews. The captain is another part of the team’s hot scoring lately too with many hoping he has returned to form. His 25 goals and 31 assists reflects that his game has improved a lot since last season.

On the other side is a penalty killing unit that finds itself still dead last in the NHL. Their kill rate of 73.9% is holding this team back from long-term success. It has to be improved for this team to stay in games.

Luckily goalies Cam Ward and Collin Delia have been making a lot of timely saves during their win streak. Some of their saves border on highway robbery too. Ward has been bringing back memories of his infamous 2006 Cup run for the Carolina Hurricanes where he won the Conn Smythe trophy. His play of late is making people almost forget his free agent contract signed last summer.

Delia has also been spectacular in goal and earned himself a much deserved contract extension Monday. With several restricted free agents coming up after the season Bowman was wise to sign the goalie of the future now versus waiting until the season ended. This signing is a step in the right direction for a team with ongoing questions in net.

The Blackhawks have a busy week ahead with games on the road Tuesday against the Boston Bruins, Thursday home against the New Jersey Devils, and Saturday at home versus the Columbus Blue Jackets. Their ability to add on to their win streak against the three Eastern Conference teams will be something to watch. Limiting shots and killing off more penalties will go a long way to helping extend the streak past seven. 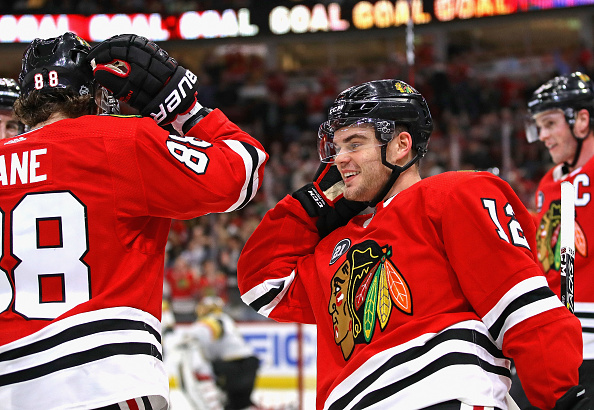 CHICAGO, ILLINOIS – JANUARY 12: Alex DeBrincat #12 of the Chicago Blackhawks celebrates his second goal of the game with Patrick Kane #88, who had the assist, against the Vegas Golden Knights at the United Center on January 12, 2019 in Chicago, Illinois. (Photo by Jonathan Daniel/Getty Images)