The Nashville Predators NHL trade deadline was active as expected. Many expected general manager David Poile to go “all-in” in their quest to win the franchise’s first Stanley Cup. Nashville was active in the weeks before the deadline as it picked Brian Boyle from the New Jersey Devils and Cody McLeod from the New York Rangers.

The Predators bolstered their forward group by adding Wayne Simmonds from the Philadelphia Flyers with minutes to go in the deadline. Nashville also added Mikael Granlund from Central Division-rival, the Minnesota Wild.

The acquisition of the pair has already been discussed before. Boyle and McLeod bring toughness and an edge to a lineup does have some finesse players. Both are willing to mix it up if needed and can do the dirty work with the body.

Boyle has been used a screener on the power play and he did his job perfectly Monday night against the Edmonton Oilers. He camped out in front of Oilers’ netminder Mikko Koskinen and set up the perfect distraction to allow P.K. Subban to blast a blistering slap-shot from the point for a key power-play goal.

He may not light up the scoreboard, but Boyle has already proven to be a key addition.

The Predators and Wild swapped forwards as they picked up the Finn for Swiss forward Kevin Fiala. Minnesota general manager Paul Fenton acquired Fiala, who played for Nashville when Fenton was the assistant general manager under Poile.

Granlund is a solid secondary scorer that usually picks up around 20 goals and 60 points. One concern with Nashville was depth-scoring and the 26-year-old is a solid pickup. He’s also signed on for another year at the decent value of $5.75 million against the salary cap. He already has 15 goals this season and has chance to hit the 20-goal mark again.

Fiala gets a change of scenery and an opportunity for a fresh start. There were times that the Nashville fan base heaped a lot of blame on him. The former 11th overall selection in the 2014 NHL Draft always played hard, but his scoring touch was inconsistent. He scored 23 goals last season, so he does have some scoring prowess.

The veteran forward was one of the most desired players at the deadline. He was rumoured to go to several contenders, but Simmonds gets a chance to reunite with former coach Peter Laviolette.

Simmonds may not the scoring touch that he used to have. However, he still carries a good mix of size and physical play. He can work hard and get the greasy goals that carry teams to playoff-victories. One of his biggest assets is his work on the power-play which fills a major need for Nashville, who have struggled with the man-advantage all season long.

Nashville did give up Ryan Hartman and a conditional fourth-round selection in 2020. The pick becomes a third-rounder if the Predators win a playoff series. Hartman did have some moments but fizzled out in recent weeks.

A big fear was that Poile would have to surrender assets in order to secure NHL-tested players. Many thought he would have to give up coveted prospects like Eeli Tolvanen or Dante Fabbro. Some thought the Predators would have to part with this year’s first-round draft pick.

However, Poile was able to keep these valuable future pieces and the first-round selection. There was concern that he may have overpaid by giving up a second-rounder for Boyle, but he was smart to not give up too much for Simmonds and Granlund.

Many media outlets think the Predators were a winner at the deadline. CBS Sports and ESPN thought Poile was smart and got what he wanted without giving up too much.

These deals are good, but the main goal is to get the club its first Stanley Cup. However, these deals are valuable in making that dream a reality. 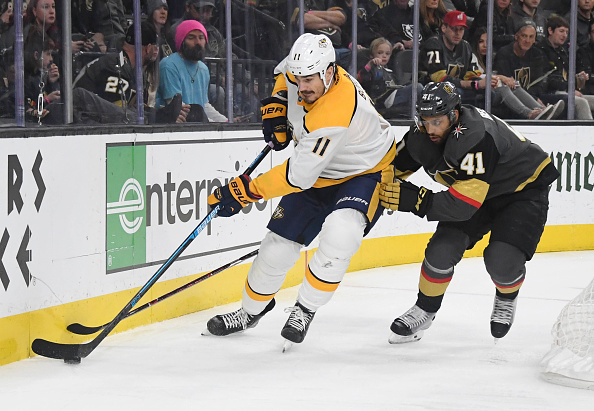 LAS VEGAS, NEVADA – FEBRUARY 16: Brian Boyle #11 of the Nashville Predators skates with the puck against Pierre-Edouard Bellemare #41 of the Vegas Golden Knights in the third period of their game at T-Mobile Arena on February 16, 2019 in Las Vegas, Nevada. The Golden Knights defeated the Predators 5-1. (Photo by Ethan Miller/Getty Images)