The Ottawa Senators have announced that goalie Craig Anderson will miss Tuesday’s game with the Carolina Hurricanes due to an eye injury. He is expected to make the trip on Thursday to play the Detroit Red Wings.

Craig Anderson got a tennis ball in the eye yesterday in the gym. He won’t backup tonight but will make trip tomorrow.

Ottawa Sun reporter Bruce Garroch said that the 37-year-old goalie was hurt after taking a tennis ball to the eye in the gym. Anderson will not suit up for Tuesday’s game, but may be ready by Thursday night.

The veteran goalie has played for the Chicago Blackhawks, Florida Panthers, Colorado Avalanche and Ottawa Senators in his 16-year NHL career. He has a career record of 275-224-66 in 599 games. Anderson has a 2.80 goals against average and .914 save percentage. He also has 41 career shutouts. The Calgary Flames originally drafted Anderson in the third round, 73rd overall of the 1999 NHL draft.

Ottawa recalled goaltender Filip Gustavsson ahead of their morning skate on Tuesday. Anders Nilsson is expected to make his third straight start tonight against Carolina.  Anderson sat out Monday’s practice with a “minor tweak”, but was expected to dress for Tuesday’s game.

Anderson has been on the bench for the last two victories by the Senators. Nilsson has stopped 89 of the last 91 shots he’s faced in wins over the Anaheim Ducks and Winnipeg Jets. The Swedish backup has a 9-12-1 record this season with a .916 save percentage and a 2.70 GAA.

It’s been a down season for Anderson, but it’s likely he’ll stay in the Canadian capital ahead of the Feb. 25 trade deadline. Dorion told TSN 1200 in Ottawa last week that Anderson wouldn’t be traded. 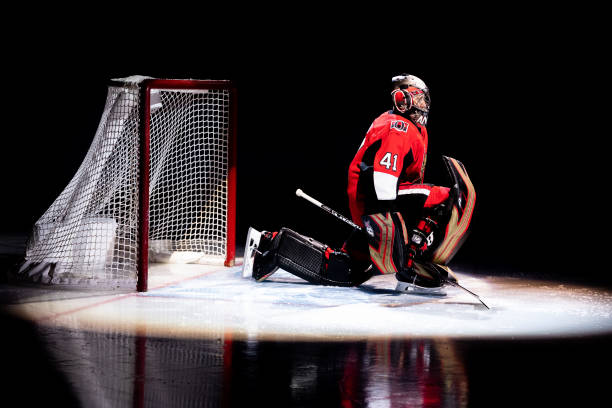 OTTAWA, ON – DECEMBER 17: Ottawa Senators Goalie Craig Anderson (41) in the spotlight before National Hockey League action between the Nashville Predators and Ottawa Senators on December 17, 2018, at Canadian Tire Centre in Ottawa, ON, Canada. (Photo by Richard A. Whittaker/Icon Sportswire via Getty Images)