It was not a normal beginning of the season for Sean Couturier. A knee injury in the summer cut down on his training. In fact, he only appeared in one pre-season game for the Philadelphia Flyers. And it showed early on in the season. Couturier posted just three goals in his first 11 games. But he has heated up since then, something the Flyers greatly welcome.

Couturier was coming off a career season last year that saw him finish second in Selke Trophy voting. The 76 points he posted was 37 more points than his previous career high of 39. The offence was finally clicking for the 26-year-old forward. And then his first knee injury came during the playoffs.

The second knee injury came during a charity game in the summer. With an abbreviated camp and preseason, there was no surprise it took Couturier awhile to get going.

11 games into the season, the numbers weren’t there for Couturier. As the season wore on, though, the Couturier fans saw last season appeared more and more. In 42 games since then, he has 20 goals and 24 assists. That has Couturier on pace for 35 goals this season after a career-high 31 goals. And that would put him in some elite company.

.@NHLFlyers Couturier is now pacing for:

The only Flyers centres in history to have back-to-back 30+g, 70+p seasons?

The numbers look more impressive after the calendar year changed. Since January 8th, Couturier sits third in the league with 19 points. His eight goals and 11 assists sit only behind Patrick Kane and Mika Zibanejad.

Couturier also finds himself in the middle of a four-game goal scoring streak. And that’s not even the longest goal-scoring streak of his career.

Sean Couturier found the back of the net for the fourth straight team game. The longest such run of his took place during his rookie season in 2011-12 (5 GP from Jan. 8-17, 2012). #NHLStats #ANAvsPHI pic.twitter.com/CBtNSj0inP

Staying with the sample size since January 8th, the Flyers have performed better when Couturier has been on the ice. The team has controlled 54.71 percent of the shot attempts, while that percentage drops 11.60 percent when he is off the ice. The same story stands for Expected Goals as well. The team sits at 57.09 percent with him on the ice and drops down by 14.46 percent once he leaves.

To put that in simple terms, the team has scored the most goals when Couturier is on the ice and has given up the least amount. That discounts players such as Dale Weise, Jori Lehtera and Mikhail Vorobyev who appeared in far fewer games during that stretch. Couturier’s Goals For percentage sits at 81.25 while the next closest teammate is at 73.33.

On the season as a whole, his overall percentage ranks third on the team among players who have played over 400 minutes. To put some of this into context, Couturier averages the third most starts in the defensive zone at 38.34 percent. Despite that, he helps produce offensively. He averages 2.05 points per 60 minutes, third on the team. And all of this is just at even strength. He is a defensive force on the penalty kill. 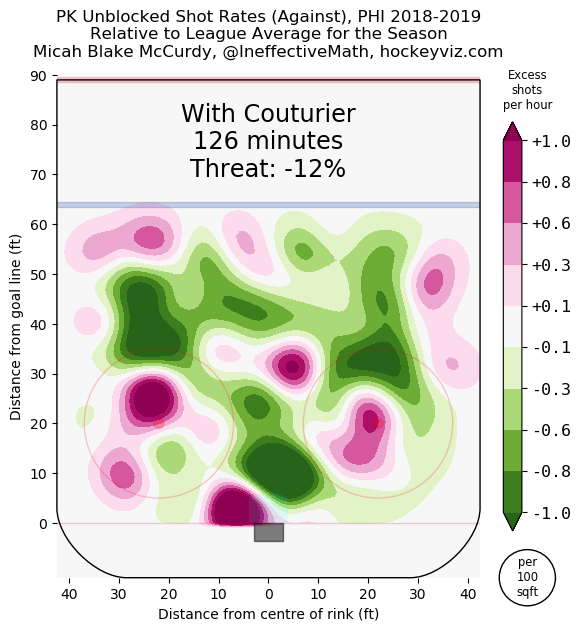 Even before this hot stretch, Couturier has been known as one of the Flyers best penalty killers. His 125.95 minutes, which are fourth on the team, is just the beginning. Some of the team’s regular penalty killers include Scott Laughton and Claude Giroux at forward. Ivan Provorov and Radko Gudas see a lot of time on the defensive end.

There is a 28-minute difference when looking at the penalty kill without Couturier. A small gap in time, though, the team gives up more shots in front of the net when he is not on the ice. The team also appears to give up more high danger chances overall, as well.

Thanks to a 10-game point streak, the Flyers have put themselves back into playoff contention. Carter Hart certainly has something to do with that. But Sean Couturier is a big reason the team has been able to pull themselves out of a hole. Going into their Monday night game against the Pittsburgh Penguins, the team sits six points out of a wild-card spot. That number could drop to four with a victory on Monday.

Sean Couturier has shown no signs of slowing down. The eight points in his last five games are just one of many things that proves that. If the team plans to make a long-term push, look no further than Sean Couturier as one of the reasons it is possible.

Main Photo by Kate Frese (@KateFresePhoto), licensed to Last Word on Hockey. The Photographer retains all rights to the photograph.