Winnipeg Jets forward Nikolaj Ehlers left Friday’s game against the Pittsburgh Penguins in the first period with an upper-body injury. He did not return to the game and will be out until mid-February.

Jets' Ehlers out until mid-February with UBI. MORE: https://t.co/njhJCsKHbz pic.twitter.com/rOgDptMWCk

Ehlers sustained the injury after colliding with Penguins forward Sidney Crosby in the first period. Ehlers went to the dressing room immediately. He tried to return to the game but left shortly after. The Jets announced he suffered an upper-body injury and would be out for the remainder of the game.

Over his four year career with the Jets, Ehlers has scored 84 goals and added 105 assists for 189 points in 275 games.

Ehlers was originally drafted by Winnipeg in the first round, ninth overall in the 2014 NHL Entry Draft.

Big Loss for the Jets

Losing Ehlers for any amount of time will be a huge loss for the Jets. Ehlers is currently playing on the top line next to Mark Scheifele and Blake Wheeler. The trio is currently one of the top 10 most productive lines in the NHL this season according to leftwinglock.com

Nic Petan is the most likely candidate to draw into the lineup with Ehlers out for an extended period of time.

In 13 games so far this season, Petan has registered two assists.

Petan was originally drafted by the Jets in the second round of the 2013 NHL Entry Draft. He has 23 points in 108 games so far in his career.

The Jets may also look to recall Logan Shaw from their AHL affiliate Manitoba Moose if Ehlers is out for an extended period of time. Shaw is currently leading the Moose in points for 21 in 26 games.

The Jets next game will be at home against the Dallas Stars. 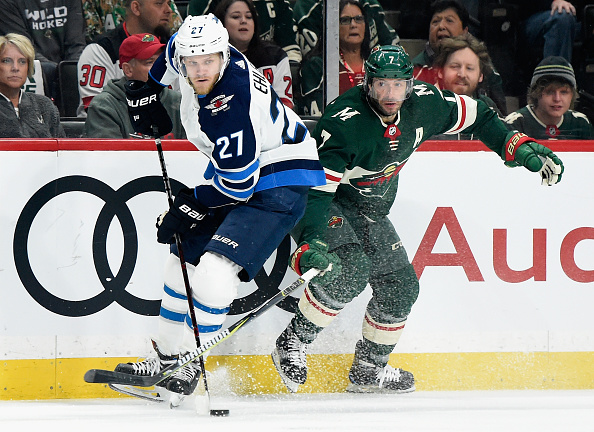 ST PAUL, MN – APRIL 17: Nikolaj Ehlers #27 of the Winnipeg Jets controls the puck against Matt Cullen #7 of the Minnesota Wild during the first period in Game Four of the Western Conference First Round during the 2018 NHL Stanley Cup Playoffs at Xcel Energy Center on April 17, 2018 in St Paul, Minnesota. The Jets defeated the Wild 2-0. (Photo by Hannah Foslien/Getty Images)