New Jersey Devils goalie MacKenzie Blackwood left Friday’s game against the Arizona Coyotes with a lower-body injury and did not return. The Devils went on to win the game 3-2 in a shootout. The Devils have not announced the extent of Blackwood’s injury, however, he did not practice on Saturday and Keith Kinkaid will start against the Vegas Golden Knights on Sunday.

Blackwood sustained the injury in the first period of Friday’s game after playing less than 16 minutes. Blackwood appeared to be in some discomfort and saw an on-ice trainer early in the game. He tried to stretch it out but eventually left the game. Blackwood was replaced by Kinkaid who secured the win for the Devils.

Blackwood currently holds a record of 3-2 with a goals-against-average of 1.83 and a save percentage of .947. He also has recorded two shutouts.

Blackwood was originally drafted by the New Jersey Devils in the second round, 42nd overall in the 2015 NHL Entry draft.

Unfortunate News for Blackwood and the Devils

It’s unfortunate news for Blackwood and the Devils. The rookie netminder is enjoying a great start to his NHL career and looks to be the goalie of the future for the New Jersey Devils. The Devils are already without Cory Schneider as he was placed on the injured reserve on December 17th with an abdominal strain. Eddie Lack is also out for the season for the Devils after suffering an injury while playing in Binghamton of the AHL.

With Blackwood out, Keith Kinkaid will take over as the Devils starting netminder. Kinkaid currently holds a record of 13-10-6 with a goals-against-average of 3.00 and a save percentage of .900. He also has recorded three shutouts.

The Devils next game will be on Sunday and they will visit the Vegas Golden Knights. 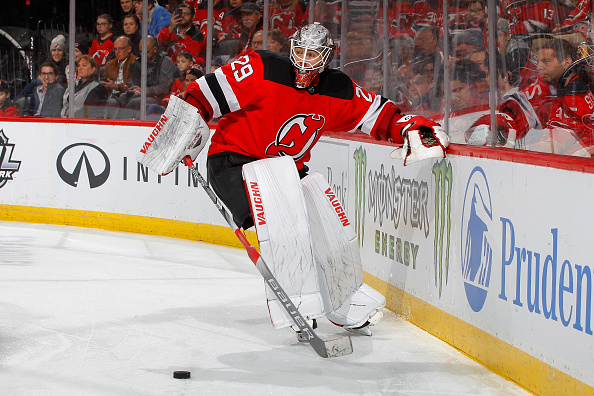 NEWARK, NJ – DECEMBER 31: Mackenzie Blackwood #29 of the New Jersey Devils in action against the Vancouver Canucks at Prudential Center on December 31, 2018 in Newark, New Jersey. The Devils defeated the Canucks 4-0. (Photo by Jim McIsaac/Getty Images)