The Ottawa Senators are a team that has been highly entertaining to watch this season. Part of that is because of the run-and-gun offence they play. They have shown they can never truly be counted out. However, because of this play style, the Sens often see themselves losing leads too. One of their top players in Brady Tkachuk sees his ice time drop when the Sens hold a lead. This leads to the question, should Brady Tkachuk get more defensive responsibility?

So far this season, Ottawa has been leading for an average of 16:24 per game. They have been up one goal for an average of 9:19 a game. Both these rates rank in the top half of the NHL. Despite this, they still rank near the bottom half for points.

So, what can Ottawa do to improve this? For one, they could put their top players on the ice while leading. Guys like Thomas Chabot, Dylan DeMelo, and Mark Stone do see plenty of ice time. However, guys like Tkachuk, Drake Batherson and Colin White do not. No team can run the same six guys out all the time, however, Tkachuk is a different situation.

I wrote about how great he has been this year a week ago. Tkachuk has been great in all ends, including his own. So, why doesn’t he see more ice time? Tkachuk currently ranks 11th out of 12 Sens forwards for time on ice per game while Ottawa holds a one-goal lead. This means that in the games he has played, Tkachuk sees the second lowest ice time while Ottawa is up one.

Possession While Up One

It is important to keep in mind that score effects are a thing in hockey. Meaning when a team is up they naturally get outshot. But, when we look at Tkachuk his numbers still shine compared to other Senator forwards. Brady Tkachuk gives up the least amount of shot attempts against per 60 minutes with 41.68. On the other end of things, Tom Pyatt, Batherson, Bobby Ryan and Magnus Paajarvi let up over 80 shot attempts against per hour. Yet, Ryan and Paajarvi see much more ice time while up a goal.

The Senators as a team give up a league-leading 75.41 shot attempts per 60 while up one goal. This means that Tkachuk is well under the Sens average, yet doesn’t get more minutes.

On the flip side of things, he also takes the most shot attempts among Sens forwards while they are up. Making him the best possession player on the Senators. The common phrase is the best defence is a good offence, and Tkachuk clearly helps out on both ends.

The sample size of leading by one goal is quite small. So, just to be sure it isn’t a fluke, let’s take a look at all 5v5 game of Tkachuk and compare it to the team. Just focusing on the defensive side, what he gives up in shot attempts and shots.

For Sens forwards with at least 100 minutes of 5v5 ice time, Tkachuk lets up the least amount of CA/60 (shot attempts). His CA/60 is 54.11, the Sens as an average give up 68.61. Once again, putting him well under the team average. Ottawa gives up an average of 36.59 shots against per 60, while Tkachuk is on the ice they give up just 29.51. His defensive game overall has been great.

Sometimes, players can give up very few shots but the ones they do are in very dangerous places, making them a negative anyways. However, from hockeyviz, we can see that for Tkachuk that is not the case. In fact, it is quite the opposite. 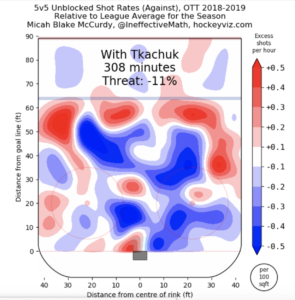 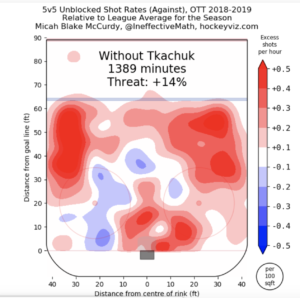 As you can see above, the shot location splits favour Tkachuk in a very good way. On the left, we can see where shots are coming from when Brady Tkachuk is on the ice. The big blue area in front of the net is a good sign and while that isn’t all him by any means, when we look at the right we see the difference. On the right, is when Tkachuk is off the ice. The red zones mean a high amount of shots are coming from those areas.

When Tkachuk is on the ice the Sens let up a significant amount fewer shots. As well as much less high danger shots. So, what is standing against Tkachuk getting more defensive ice time?

I mentioned this in my last post about Tkachuk as well, however, it is important to state again. Quality of Teammates is one of the most important things when looking at results in the NHL. Tkachuk gets to play almost every 5v5 minute with Stone. Stone is a very underrated and amazing player who will make anyone’s numbers better. He has a history of boosting linemates performances.

The argument to this concern, however, is that this line has clearly had no issues being defensively responsible when the team is tied or down a goal, so why not try them while they are up too? If it isn’t broke, don’t fix it. Let the line of Tkachuk-White-Stone go out and play at all points in the game.

The other thing to note is that Tkachuk leads Sens forwards in offensive zone draws, with 56%. He takes the second least amount of defensive zone draws with just 14% of his shifts starting in the defensive zone. So, his numbers on the defensive side may be inflated a bit. However, when you look at just how much higher they are then the rest of the team, it is reasonable to expect that he would still be above average given more responsibility.

In the future, the Ottawa Senators will be relying on Tkachuk to lead this team. The 4th overall pick will be a centrepiece for the Sens heading forward and they need all aspects of his game as good as possible. This is why it seems foolish to keep limiting his minutes while up a goal when he has clearly shown he is ready for more. The Sens have not been a great team holding leads, so why not try something new? Brady Tkachuk has clearly shown he is capable of handling more defensive responsibility.