The statistics have been incredible with 1,057 games played and 630 wins in 18 years as an NHL starting goaltender. That’s good enough to be ranked fourth on the all-time wins list. Those stellar numbers belong to none other than Florida Panthers goalie Roberto Luongo. The man with no Stanley Cups, yet one of the most successful careers between the pipes in the NHL.

Luongo isn’t quite ready to start looking back at his career, but the clock is ticking for the 39 year old. His contract goes through 2022 and it’s hard to believe he’ll be kicking pucks around at 43. Stranger things have happened because he was on the same Panthers team where Jaromir Jagr found success in his 40’s…

Ultimately, the Panthers will have to figure out what’s next for their team in net. They started that process when they signed James Reimer back before the 2016-17 season. He’s 30 years old with three years remaining on that deal, and the hope is still that he continues taking more of the load until he’s the bonafide starter in South Florida.

The problem is Reimer simply hasn’t stopped pucks as well as Roberto Luongo. Obviously its hard to expect another Hall of Fame guy like “Lu” to show up right on time, but still. Reimer’s .913 save percentage last season was solid, but a far cry from Luongo’s .929. Luongo’s GAA of 2.47 ranked far ahead of Reimer’s 2.99.

They both sported similar win totals, but Luongo pulled out the tough ones. Luongo can win a game for the Panthers they maybe didn’t deserve. However, Reimer had a few early season losses in games the Cats probably should’ve won. While Luongo makes a save he shouldn’t make at a time the team needs it, Reimer gives up a goal he should stop and kills the team’s energy.

It might not be quite that bad. Reimer’s decent, but the Panthers could use more than “decent” in their net.

What Florida Needs in Net

The Panthers are peaking right now, as we speak. That team is just hitting their stride, which was made very obvious by the way they played from January on through the end of last season. After the all-star break, they rattled off a 25-8-2 record. That mark was good for second-best league wide over that span. Florida missed playoffs by one measly point and that pointed haunted them.

The Panthers added Mike Hoffman to their already star-studded top six this summer to help ensure they don’t fall short again. Florida’s got Aleksander Barkov, Vincent Trocheck, Jonathan Huberdeau, Nick Bjugstad, and Evgeni Dadonov rounding out their top-two lines. They have as many as ten players fighting for ice time in the bottom-six too. This group will quickly become recognized league-wide as one of the most potent offenses in the league. And each guy in the top six is signed for at least two more years (some as long as through 2023).

Right now would be a tragically bad time for goaltending to become an issue. Poor goaltending is the hardest position to make up for elsewhere. The other team is going to take 20-30 shots every night no matter what. If you don’t have quality in net, you can’t win consistently enough to be a threat for a championship.

So, let’s say Luongo leaves tomorrow or gets injured (which happens all too often for him as he ages, unfortunately). Reimer is the clear number one after Lu, and recently signed Michael Hutchinson slides in as his backup. In a perfect world, Reimer succeeds and the Panthers push on through. Hutchinson supplies solid back-up numbers as needed.

What happens, though, if Reimer can’t cut it?

This question should be at the forefront of the mind of General Manager Dale Tallon. Obviously, there’s a bit of “sit and wait” that has to be allowed first, as a knee-jerk move to bring in some other high caliber goaltender might not be necessary. Reimer could work out still, I just don’t know that he’s proven yet to be the obvious or easy choice should worse come to worse.

Since Luongo made it clear his plans to play this season (he’s already been skating, reported to training camp, and so on too), we should go ahead and start out goaltending search with the free agent market next summer. This would appear to be the next reasonable time for Florida to need to worry about their goaltenders (of course, barring an utter disaster between Luongo, Reimer and Hutchinson this year).

Sure those names are attractive, but to land one of them you’ve got to be able to afford one of them. Florida already sits right up against the cap. That being said, a lot of that is due to the $9.23 million they’ve got committed to their goalies. Luongo’s retirement is the catalyst for this whole need, so if the Cats are after a guy next summer it would only be because Luongo decided to hang up his skates.

So Luongo retiring provides some cap relief (of course there’s the cap recapture penalties, but that’d definitely be less than his annual cap hit). You’d still want more space, as it wouldn’t make sense to bring in another goalie around Reimer’s age or younger and keep Reimer on the team. This means a trade would have to happen.

Again, we’re in a theoretical scenario. To remind you, we’re saying Reimer doesn’t perform well enough to warrant handing him the starting duties, and Luongo decides to retire before next year. Florida’s best option, in this scenario, would be moving Reimer’s contract elsewhere and using the cap space created between that and Lu’s retirement to attract a premiere goalie.

Florida’s going to be good for a long time, so it shouldn’t be too difficult to attract someone like Bobrovsky. He’s in his early 30’s and is always a Vezina candidate. Varlamov is an interesting option too, because he might be the only quality starter taking a pay cut next summer. That only is because of his recent injury history, but it could make him an attractive option financially. If Hutchinson is a reliable enough goalie, maybe the risk of a more injury-prone guy like Varlamov is something Florida can live with too.

Looking more long-term, the future face of the net in Florida might already be a part of the organization. Samuel Montembeault, 21, just completed his first professional season in the AHL with Florida’s affiliate. Drafted in the third round of 2015, many Floridians believe him to be the long-term solution in net. How long-term that may be is yet to be seen, but something tells me his readiness might not line up perfectly with Luongo’s retirement. He posted a .896 save percentage, and a 3.26 goals-against-average, in 41 games with the Springfield Thunderbirds last season.

Goalies don’t often jump into the NHL in their early 20’s. If Luongo sticks out his full contract through 2023, Montembeault will be 26 and hopefully ready by then. If he’s truly going to be an NHLer, he’ll probably break in a couple years before that in at least a secondary role. Whether Roberto Luongo is still there or not, Montembeault could be part of the team in the next couple seasons.

Now, waiting on a 21-year-old goalie in hopes that he’s strong enough to replace your 40-year-old Hall of Famer seems like a bizarre strategy. If Reimer successfully takes over, then Montembeault can understudy with him and transition into the number one job as he becomes able. If not, then the team really has no other option but to bring in another reputable starter. You can’t put that amount of pressure on an unproven kid at the NHL level and expect smooth results.

Roberto Luongo Out, Who Knows Who’s In

For now, Florida has to stick to what they’re invested in. Roberto Luongo is followed by James Reimer on the depth chart. Then there’s Hutchinson and eventually Montembeault. Hopefully Reimer takes over with Hutchinson behind him, and then Montembeault grows into a full-fledged starter to usurp them both over time.

If not, there are plenty of options. If the issue is immediate, there’s plenty of pending free agent goalies coming up. Even if Bobrovsky signs an extension with the Columbus Blue Jackets, there’s enough other names to choose from. It would mean trading away Reimer too, and hopefully Hutchinson is strong enough to stick as a backup (otherwise, you’re looking at two new faces in net).

If the issue is down the line with Montembeault, its not really something to worry about now. Florida should continue selecting a goalie every year or two in the entry draft to stock up at the position in their prospect pool; that always helps mitigate the risk of one specific prospect becoming a bust. They shouldn’t put all their eggs in the Montembeault basket yet.

If only Roberto Luongo could play forever… 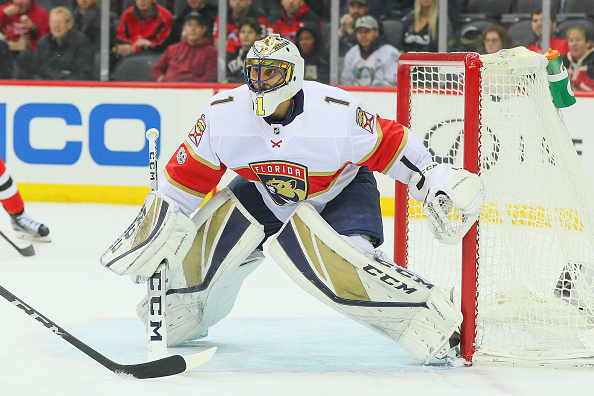 NEWARK, NJ – NOVEMBER 27: Florida Panthers goalie Roberto Luongo (1) during the first period of the National Hockey League game between the New Jersey Devils and the Florida Panthers on November 27, 2017, at the Prudential Center in Newark, NJ. (Photo by Rich Graessle/Icon Sportswire via Getty Images)