The Detroit Red Wings have announced that defenceman Mike Green will likely miss the start of the season due to fatigue. The news came Friday morning from Red Wings general manger Ken Holland.

Detroit Red Wings D Mike Green likely to miss start of season. Has been dealing with fatigue, will see specialist. Early thinking is it may be virus, but team will know more in next few days.

Green hadn’t shown much energy at the start of training camp a week ago according to Holland. The Calgary native was sent for bloodwork and then to a specialist for a follow-up examination. Holland was hoping that Green would meet with doctors Friday or Monday. The early thinking is that Green has a virus.

Green scored eight goals and 25 assists for 33 points in 66 games last season. He also added 38 penalty minutes. His possession numbers were 47.8 percent Corsi and a relative Corsi of -1.2.

“We don’t really know the extent of exactly what he has got,” Holland said to the media on Friday morning. “But we are shutting him down pending what information we get from a specialist.”

The soon-to-be 35-year-old was just cleared for contact prior to the start of training camp. Green was recovering from neck surgery that ended his 2017-18 campaign. This ailment will push back Green trying to get back into playing shape for the start of the season. He’s also one of thew few sources of offence on a defence that didn’t generate many points.

The illness opens the door for young players like Dennis Cholowski, Filip Hronek and Libor Sulak to earn a spot on the main roster to start the season. Detroit’s defence is in a state of transition and Green’s absence will make for more uncertainty. 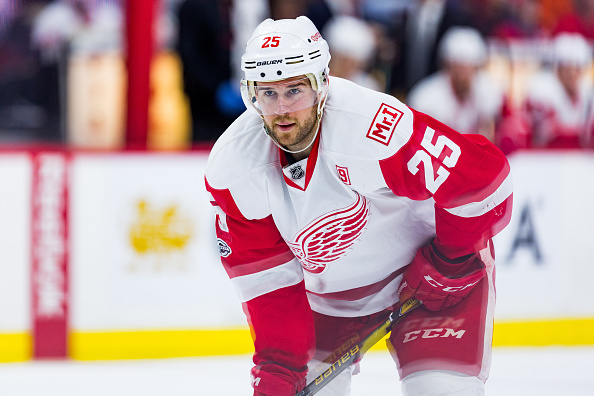 OTTAWA, ON – APRIL 04: Detroit Red Wings Defenceman Mike Green (25) waits for the faceoff during first period National Hockey League action between the Detroit Red Wings and Ottawa Senators on April 4, 2017, at Scotiabank Place in Ottawa, ON, Canada. (Photo by Richard A. Whittaker/Icon Sportswire via Getty Images)