Nick Shore is an underrated center in the NHL. Ryan Stimson’s recent article highlights his attributes well. The goal here is to expand upon his work to see how Shore would fit in the Flyers lineup.

Jori Lehtera is the Flyers current fourth line center. The 2017-2018 season was a rough one for Lehtera. The NHL is getting faster by the day and it was very clear that Lehtera doesn’t have the speed necessary to succeed. The most egregious example was a game against the Islanders, where Mathew Barzal left him in the dust. Shore, while not exactly a speedster himself, can keep up with the pace of today’s NHL.

Matt Cane releases his free-agent contract projections every year and this year is no different. Cane projects that Shore will garner a two-year contract with an annual average value of $1,003,588. Flyers general manager Ron Hextall has said he wants to bring in free agents who won’t block the prospects. Shore is one of those free agents. Let’s now examine Shore’s on-ice attributes.

Shore’s ability to pass the puck is his bread-and-butter. Here are a couple examples:

Both of the above clips showcase what makes Shore’s passing so deadly: his vision. Those passes are difficult to execute as well. In the first, there is very little time at all for Shore to do anything with the puck because the forward is bearing down on him fast. He instinctively knows where the open man is and quickly fires the puck over to him for the goal. Poor Travis Sanheim looks like he didn’t know what hit him on that play!

The second clip is the kind of pass you see first line centers make regularly. Certainly not from a career fourth line center. The pass goes through one defender’s legs and right past the other defenders stick. Cutting passes such as these break things open for his teammates to score, creates scoring chances, and sustains offensive zone pressure.

The graph below further emphasizes Shore’s passing abilities. Data for the graph was collected by Corey Sznajder and Ryan Stimson. Sznajder and Stimson’s data is manually tracked and collected exclusively during 5v5 situations. Moreover, there is a viz for this data that can be found here.

These results are indicative of a player who can draw multiple defenders towards him, thereby creating space for his teammates to finish off his passing plays. Unfortunately, his regular linemates throughout his career have been unable to capitalize on his set-ups consistently. We’ll touch on the quality of his regular linemates in a little bit.

Shore does not tend to shoot the puck very often. When he does, he tends to shoot where the goalie isn’t and looks to create a potential rebound for his teammates with his shots.

The goal in that clip highlights both Shore’s shot and his hockey sense. Shore clocked in on the defenseman attempting to make an outlet pass. He knew that the defenseman was looking to pass it to his teammate near the top of the circle. With that in mind, Shore intercepted the pass and shot the puck top shelf. An important aspect of this goal is Shore’s use of his teammate as a screen for the goalie.

Shore fires a one-timer past the goalie pic.twitter.com/UDEpu6ZVhc

This clip shows Shore finding the soft ice in the slot and rocketing it past the goalie with a one-timer. He hasn’t scored many goals at the NHL level (15 goals in 236 regular season games). The ability is there, he just needs to take advantage of it some more in the future. Shore’s unselfishness in looking to make a pass to his teammates plays a part here as well. His point totals will increase as a result of shooting more. Before we delve into Shore’s advanced stats, there is something important to note. All of the data is presented via percentiles.

It is tough to quantify defensive play. Whether it be a forward or a defenseman. There are no publicly available stats that measure gap control, defensive coverage, sticks in the passing lane, etc. To that end, the publicly available data comes in the form of suppression (shots, chances, goals, and expected goals).

This graph includes data from NaturalStatTrick, and Corsica. What’s more, the data is a comparison of NHL forwards who have played at least 600 minutes of ice time at 5v5. Curiously, there is quite the discrepancy between Shore’s goal suppression and expected goal suppression numbers. One would be remiss to dismiss the possibility that regularly playing with his team’s worst players had some sort of effect on his goal-based results. The visual below goes on to show why these results are particularly odd. 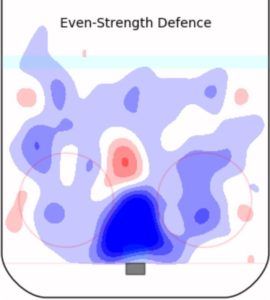 The percentiles for Game Score and Points are derived from Bill Comeau’s viz. Shore’s results here are not anything special. On the other hand, his shot-based numbers are to be lauded. Players with these kinds of shot-based results should be given an opportunity to play higher up in the lineup. This begs the question: why is Shore’s play not resulting in more tangible offensive production? The answer was alluded to earlier: quality of teammates.

With some assistance from Corsica, the quality of teammates question has been answered. This graph highlights just how poor Shore’s regular linemates have been throughout his career. It must be frustrating to set up your linemates regularly for prime scoring chances just to see them flub those opportunities. Now that we’ve answered the quality of teammates question, let’s delve into another part of Shore’s game where he shines: the penalty kill.

Nick Shore’s 2017-2018 penalty kill stats are top-notch. Data presented is of Forwards with at least 100 minutes of ice time on the penalty kill. The Flyers penalty kill has been a problem for years and is dying for some new blood. This is where Shore comes in. Shore will be able to offer the flyers a lot more value on the penalty kill than Valtteri Filppula or Jori Lehtera ever could.

Why was Shore traded twice this season? Are his career offensive numbers thus far a primary indicator of his abilities, his linemates, or a little bit of both? If signed, would the addition of Shore to the lineup block Mikhail Vorobyev or Morgan Frost from making the team out of training camp? Will a Shore signing act as an impetus for sending Lehtera down to the minors (saving the Flyers some cap room as a result)?

There are a lot of things to consider when contemplating signing Nick Shore this off-season. However, there is enough evidence to suggest that he will be a valuable addition to whichever team decides to sign him to a contract. Flyers fans should have their fingers crossed that Hextall at least kicks the tires on Nick Shore.