Manchester United played host to Aston Villa in the third round of the Carabao Cup. The two teams have faced each other 195 times, with their last clash ending in a 3-1 victory for Unai Emery in his first game in charge.

Erik ten Hag was out for revenge after enduring his first loss since October 2 against Manchester City. Bruno Fernandes made a return to the side after missing the Red Devils’ Premier League match over the weekend through suspension. The duo of Fred and Scott McTominay also reunited to take their place at the heart of midfield.

Anthony Martial returned to lead the side in attack, while club captain Harry Maguire started the game alongside Victor Lindelof in defence. Martin Dubravka got his United debut following his loan move from Newcastle United in the summer.

Despite some lacklustre performances in the past few games, Donny van de Beek kept his place in the starting lineup.

Malacia Had a Solid Display, Anthony Martial Was Sloppy

Despite having the bulk of possession in the first half, Manchester United failed to make their chances count. Bruno Fernandes found the back of the net on one occasion, only to be called offside, which seemed to be the theme for the Red Devils.

Malacia looked potent in attack as he troubled the Villa defence. However, the same cannot be said for Martial and Marcus Rashford, who were caught several times in possession.

The second half started quite the opposite of the first one as Unai Emery’s team made the breakthrough in the 48th minute. However, the Red Devils were not to be outclassed as they replied with a goal of their own within a minute, courtesy of Martial.

The game was a tale of two halves, as the commentators rightly put it, “a sterile first half and a storming second.” Villa restored their lead in the 62nd minute thanks to an own goal from Diogo Dalot. United again tried to hit back as Rashford made a great run behind the Villa defence. However, his finish was off-target.

Despite that miss, United’s night was not over as Rashford tucked in another chance in the 68th minute after being the first to react to a loose ball in the Villa penalty box. The Red Devils once again made Emery’s side pay in the 78th minute following some lacklustre defending. Bruno Fernandes found the ball at the edge of the penalty box to score the goal, albeit with the help of a deflection.

Scott McTominay capped off a solid second-half display from Ten Hag’s side with a great run into the box and getting on the end of a great pass from Alejandro Garnacho. 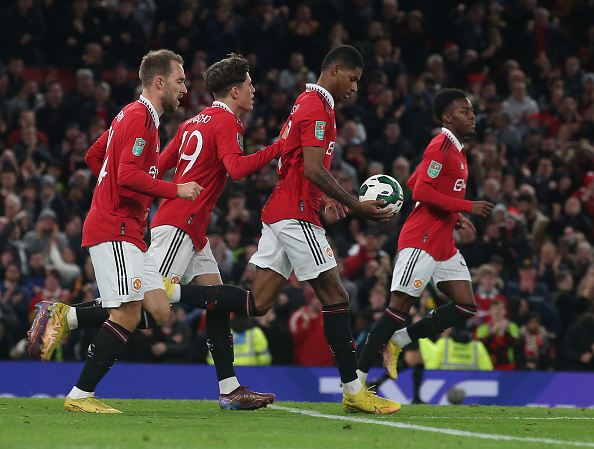 Dubravka’s debut for United did not go according to plan as he failed to keep a clean sheet. However, the Slovak had a decent game acting as a sweeper keeper. He showed great awareness and distribution when his services were called upon.

The young full-back had a solid game in defence as well as in attack as he looked to give Luke Shaw some tough competition. Malacia was compact with his runs in attack while being erudite in defence.

The Swedish international looked the sharper of the two centre-backs. He provided some good cover for the missing Raphael Varane and once again proved his worth.

The Manchester United captain looked rusty as he started his first game in a while. Maguire lost the ball in crucial areas at times while also being caught out of possession.

It is safe to say that Dalot has had better days in a United shirt. Despite not having the worst performance, he did not look like his usual self. The Portuguese star put some poor balls into the box while his defensive game lacked solidity.

The Brazilian star tended to hit some poor passes while also not making a case for his defensive prowess. He had an average game with an 84.8 per cent passing accuracy.

McTominay has looked like a much better player under the guidance of Ten Hag, and this was once again on display. The Scottish international scored in the game while running the midfield with potency. He secured an 88.2 per cent passing accuracy.

Van de Beek once again failed to impress. Despite getting another chance in the starting lineup, the former Ajax star was seemingly lost in the field, failing to keep attacks going. He secured a dismal 70.6 per cent passing accuracy.

Fernandes was the star of the match as he dictated most of United’s attacks. The Portuguese star assisted the Red Devils’ first goal while scoring another. He also had seven shots in the game and received much acclaim from his peers despite only having a 66.7 per cent passing accuracy.

A return to the starting lineup did not go well for Martial as he failed to impress. Despite scoring United’s first goal, the Frenchman was mostly disappointing, looking blunt in attack.

Unlike Martial, Rashford seems to be in great form. He made some solid runs into Villa’s penalty box. The English international came close to scoring on several occasions before finally putting the ball in the back of the net.

United’s substitutions paid off as Ten Hag used all five of his available changes. The most impressive of the changes was undoubtedly Garnacho. The Argentinian looked to take on defenders while extending United’s play in the final third. He also delivered a wonderful cross for United’s fourth goal in the game.

Christian Eriksen also put on a solid display with his deft touches and runs into the box. Anthony Elanga also had his moments as he looked to make the minutes count. However, the Swedish star was not as impactful as Garnacho coming off the right wing.

Casemiro and Lisandro Martinez were brought on to protect United’s lead, and they did a stellar job.