Imagine being just a couple of years removed from your most recent All-Star season, when you were lauded for your outstanding defense; the reputation that you cultivated for yourself. Imagine signing a four-year contract worth $72 million for arguably the most famous basketball team in the world, and then you just stopped playing. To many, especially loyalists of the Purple and Gold, it is quite obvious who this describes: Luol Deng.

Understanding the Future for Luol Deng

In 2013-14, Luol Deng was averaging 19.0 ppg, 6.9 rpg, and 3.7 apg, career-highs in both points and assists. Deng was with the Chicago Bulls, the team that drafted him 7th overall in the 2004 NBA Draft. Over the years, Deng, along with the Bulls, developed into a legitimate Eastern Conference threat. Under the guidance of Tom Thibodeau’s preaching his hard-nosed, tough brand of basketball, Deng together with the superstar core of Derrick Rose and Joakim Noah, the Bulls made Chicago basketball great again, better than it had been in the post-Jordan era.

While they never made it past LeBron James to the NBA Finals, for Deng, it was a remarkable period. He had two All-Star seasons in 2011-12 and 2012-13 and was the backbone of the Chicago Bulls, the “glue” that would hold the team throughout those memorable years.

A Change of Scenery

It was unfortunate that injuries never left Chicago, especially their star point guard, Derrick Rose. Eventually, Luol Deng would look for a change of scenery, spending the latter half of the 13-14 season in Cleveland, before signing with the Miami Heat in the 2014 off-season. While in South Beach, he would continue to contribute solid numbers to the team. Although his stats were marginally less than his output a few years back, Deng was still poised to finish his career with decent numbers on a decent team.

Enter, the ailing Lakers. The Lake Show, the 16-time NBA champion, was star-starved and hungry for the postseason. They had just missed the playoffs for the third straight year, and the face of the franchise, Kobe Bryant, had just retired. The Lakers were coming off a 17-65 season and had no veterans to guide the team in the right direction. They had cap space and were willing to use it to get what they wanted.

Deng was a solid veteran with years of experience and still had some good season in front of him. He was supposed to be one who would lead the team back to the playoffs. Ultimately, the Lakers signed Deng to a hefty $72 million deal that extended to the 2019-20 season.

Downhill for the Veteran

Changes in the Front Office 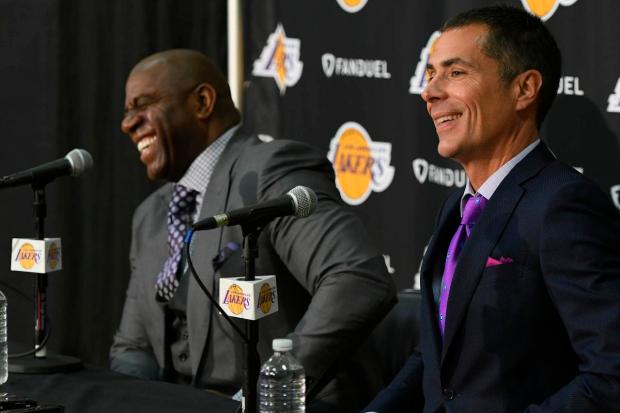 To the team and its loyal fanbase, this was all good news. This was a welcome change to the toxic environment that had been set in place after questionable hirings and signings over the past years. To the fans, the Magic-Pelinka duo would further complement the fast-paced, modern, and exciting system that recently hired head coach Luke Walton was trying to establish in the young Lakers.

Ineffective in the New System

This change in management happened with not yet even a quarter of his contract fulfilled. His age and the wear that he endured in his prime years in the Windy City had severely limited his performance in the first part of the year. Deng struggled to keep up and find his groove in the Lakers’ system.

Only producing 7.6 points and 5.3 rebounds while playing 26.3 minutes through 56 games, and just shortly after the hiring of the new management, he was relegated to the bench. By March, he was completely shut down towards the end of another lost season for the Lakers, for the sake of giving the youngsters some much needed playing time and experience.

He never got his place in the rotation back. In the current season, Deng has played just 13 minutes for the Lakers. Since then, he has either been a placeholder on the bench so that the Lakers would have someone to step in if somehow the rotation players all get injured or in the locker room, watching the game on a TV screen while simulating on a treadmill the pace of the game.

This sounds like mental torture for a professional basketball player. Especially to a former All-Star, less than halfway into a multimillion-dollar contract. Even when the Lakers frontcourt was hit by injuries, Deng still did not see any time on the court. His contract is seen as a financial burden on the team, and would just stop the Lakers from signing stars in the coming offseason. Although he has remained professional and has done all he can for the team off the court, his immediate future is still unclear.

So what’s next? What’s next for this fallen star? While the Lakers are evaluating their options for managing his contract, the bigger question for Luol Deng is, is there still time to come back? He is turning 33 this April, and he has not played in an NBA game since the start of this season. Can he still get his career back on track? If he reaches a buyout agreement with the front office, how willing would other NBA teams be to take a chance on Deng? How willing would Deng be to accept what roles or money that would be offered to him?

A lot of decisions are waiting on Luol Deng, with no clear path visible ahead. All anyone can do right now is speculate. Going forward, it will be interesting to see what becomes of the rest of Deng’s NBA career.