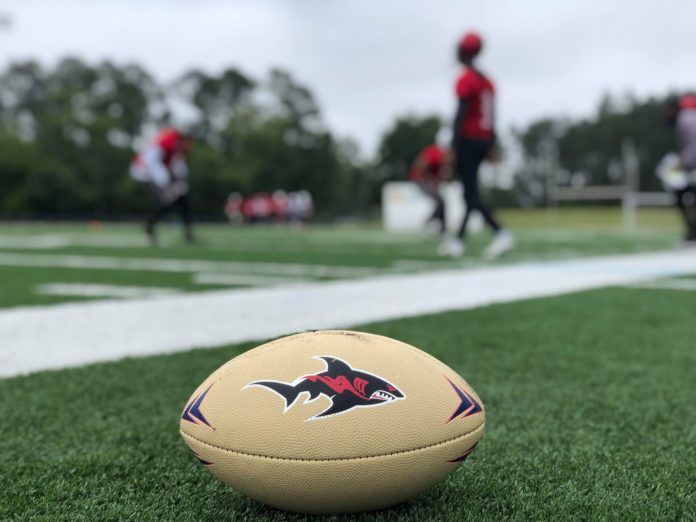 The National Arena League (NAL) looks to kick off their season with a series of games on Saturday, April 13, 2019 at 7:00 pm. One of those three games includes the newly-developed New York Streets going against former NAL Champions, Jacksonville Sharks.

The New York Streets (0-0) travel down to Jacksonville, FL to take on the Jacksonville Sharks (0-0), who are celebrating their “Decade of Dominance”.

This is the Sharks’ 10th season of being a franchise and have set some pretty incredible standards for the City of Jacksonville. The Sharks are undoubtedly the best football team in Jacksonville. The New York Streets, on the other hand, look to get Jacksonville to hop off their high horse this Saturday night.

The Sharks have the best offense on paper heading into this season, having the top three receivers in Durron Neal, Devin Wilson, and Jarmon Fortson.

Unlike last season, the Sharks also look like they have a reliable quarterback to lead the team with Jonathan Bane.

Not only do they have this trio coming to Jacksonville, they have Chris Gilchrist returning from last season. Cody Saul would be a mentionable name, but he is likely going to take the Mac Linebacker duties now that Charlie Hunt is no longer playing.

The Sharks also have a strong offensive line with plenty of arena experience. Their O-Line averages just over 6’5″ and more than 325 pounds! For anybody, that is a powerful front line and is very difficult to get past.

On the defensive side for the Sharks, they have Defensive Linemen Damien Jacobs and Keith Bowers returning from previous seasons.

They found just the guy with Defensive Lineman Nick Woodman. Woodman played for the Jersey Flight last season. He has the height and is light enough to be super quick on the field.

With Bowers and Jacobs doing the heavy work, it will allow Woodman to use his speed to sneak right through the holes on the opposing O-Line.

The Sharks have a fresh set of defensive backs, not having a single player return from last season.

They would’ve had Marvin Ross, but he was acquired by the Atlantic City Blackjacks of the Arena Football League (AFL). With that said, there is no telling what this group of DB’s will do in the league.

A fresh team in New York

The Streets are one of the newest teams in the league, meaning we don’t really know what to expect of them right now for this season. We don’t have any expectations for them right now, and we won’t get to truly know what they are capable of until around Week 3 or 4 when they have faced the majority of the league.

The majority of their team is full of rookies, which isn’t always a good, nor bad thing in arena football. There have been outstanding rookies in the NAL in previous years. This is just the start for many players and their bright futures.’

With a team full of rookies, there will be plenty of mistakes early, but they will learn together and get to know each other better.

The Carolina Cobras last season had a team of all-stars and had a slow start last season. With a young and fresh team, the Streets will quickly understand what it’s like to play the sport of arena football.

A few things to mention is that there is no better place than Jacksonville to have a franchise’s first ever game, especially for rookies.

Jacksonville averages over 9,000 fans per game and have done so since their inception. This will literally be the most nerve-racking game for the players and the most stressful.

After this week, the Streets will travel to places that are not as populated. The last thing that the Streets have in their favor is all of the facilities that they have.

Not only do they have great indoor facilities and offices, they have probably the best technology in the entire NAL. They were able to hold a player combine and a tryout with NFL-caliber equipment.

This game will be no cakewalk for Jacksonville. No game is a guaranteed victory. Anything can happen at any time.

With the way Jacksonville looks compared to New York right now, the Sharks should not have any issues with this game.

This won’t be an easy victory for the Sharks, but Jacksonville should be able to walk out of VyStar Memorial Arena with a 1-0 record.

Be sure to follow LWOS Indoor Football on Instagram and Twitter for all updates on what is happening thoughout the sport of arena football and indoor football.