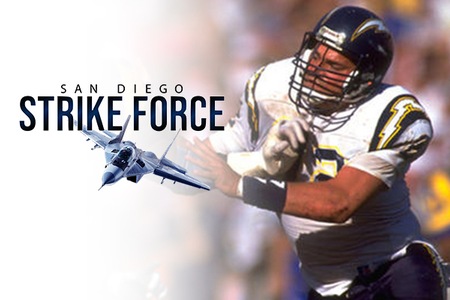 It referenced a few issues about the play in San Diego, one citing that only 300 fans attended the game when LWOS sources say it was more around the ballpark of 1500.

Though that’s not to say the whole article was a wash. In fact, the piece helped shed some light on just what kind of a coach is leading the charge for the IFL’s new expansion San Diego Strike Force.

Ferguson: Burt Grossman has no place in Indoor Football

After 2018 NAL Coach of the Year award Ameer Ismail was hired and left to accept a different position in the east-coast league, San Diego found former Charger Burt Grossman.

Grossman was quoted a handful of times in the Tribune’s article and what he had to say after his team’s home opener was alarming, senseless and above all ludicrous for the position he is in.

“It’s entertaining. We really don’t have a fan base, and nobody really cares if we win or lose,” Grossman told the Tribune.

If you think that’s a bad one, we’re just getting started.

Any coach that says that publicly about his players is over the top.

There’s a point to send a message, and maybe there was a message that needed to be sent after the team lost by 20 to a fellow expansion team playing its first game ever.

Though, to say that about a squad of players that he is coaching is disastrous.

“It’s hard to get the concept of a middle ’backer not knowing simple keys that youth football kids know,” Grossman continued to rant. “They don’t seem to have it.”

I’d care to wager a large sum of money (that I don’t have – but I’d wager it) that the Strike Force could be the wheels off any Pop Warner youth football team in the United States.

Is it bad that I think Grossman is crazy enough to bring one in to scrimmage?

“This is a last-chance league, but at some point if you don’t know the basic concepts of football at this level or any level, it’s shocking to me,” Grossman said in the last of his statements to the Tribune.

This guy is asinine.

I’d rather have a coach of my team walk down the hallway and call an official from the game that happened prior a, “cheating mother*cker.” (What’s up, Fran McCaffery)

And, knowing a handful of the people involved, this won’t be the end of this team. There are pieces in San Diego that will make sure this team reaches its highest potential.

The IFL is trying to make the west coast work and expand the league further in that direction after they established a solid, Midwest foundation this season.

For it to succeed, San Diego is a major cornerstone and benchmark for them to hit.