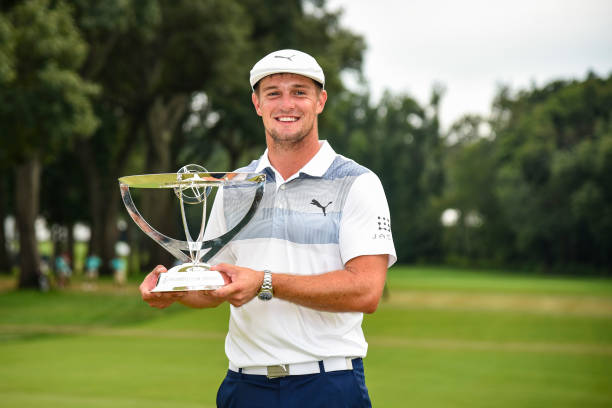 For the third time on tour Bryson DeChambeau is a champion golfer. This recent win marks the rising star’s first in the FedEx Cup playoffs. The opening round of this year’s closing stretch of the PGA Tour season kicked off at the Northern Trust Open from Ridgewood Country Club in Paramus, New Jersey.

Only 125 of golf’s top contenders qualified to tee it up in this year’s post-season. Through four days of competition only the top 100 would move onto the second leg of the FedEx Cup next week at the Dell Technologies Championship. The entire field at Ridgewood fought tooth and nail for every shot each hoping to crack the top hundred and advance to TPC Boston but at the end of four days there could only be one man holding the trophy.

DeChambeau calculates the keys to victory

After staying in the hunt over the first two rounds, DeChambeau punched up his play Saturday afternoon. In his first nine holes of the day, the 2015 NCAA Champion carded his sole bogey on the par-4 7th. The lone blemish on his round was thankfully surrounded by five birdies in his opening half of play.

Shot shaping. 😍@B_DeChambeau made this look too easy.

DeChambeau would continue to roll on through his third round with four more birdies to turn in an 8-under round of 63. Heading into the final 18 holes of play the lead was four strokes over Keegan Bradley, who went a stroke lower Saturday with a 62. Tony Finau and Cameron Smith followed closely behind tied for third but still five strokes back.

Sunday began strong for DeChambeau with two straight birdies on his opening pair of holes. Unfortunately the hot start was quickly negated following two birdies in his front nine. Near the end of his round Aaron Wise battled to within two strokes of the lead but stumbled down the stretch with back to back bogeys on 17 and 18.

With Wise out of the way and Finau turning in a valiant performance but ultimately coming up short, the path was clear for DeChambeau. Birdies at 12 and 13 further distanced himself from the pack, leading to a four-stroke victory. The win is DeChambeau’s third of his career with all coming in only 14 months of competition.

The win in Paramus puts DeChambeau at the top of the FedEx Cup standings entering the second leg of the playoffs. When the action kicks off next week in Boston at the Dell Technologies Championship Justin Thomas, Dustin Johnson, Finau and Brooks Koepka will round out the top five. Among those leaders Thomas, Johnson and Koepka have already qualified for this year’s United States Ryder Cup team.

For players like DeChambeau and Finau they still have to play their way into the heart of team captain Jim Furyk. By the close of the FedEx Cup playoffs Furyk will have revealed his four captains picks to round out this year’s squad to take on the Europeans in Paris. A win on this big of a stage for the rising 24-year old phenom is assuredly nothing but promising for DeChambeau.

Heading into this year’s playoffs many believed the Northern Trust champion was on the bubble. Veterans like Phil Mickelson and Tiger Woods are locks in many viewers eyes while DeChambeau, Finau and other contenders like Xander Schauffele and Kevin Kisner would be left to battle it out for the remaining spots. The Ryder Cup is all about dealing with high pressure situations so a marquee victory during the season ending playoffs is a step in the right direction for the eccentric Bryson DeChambeau.