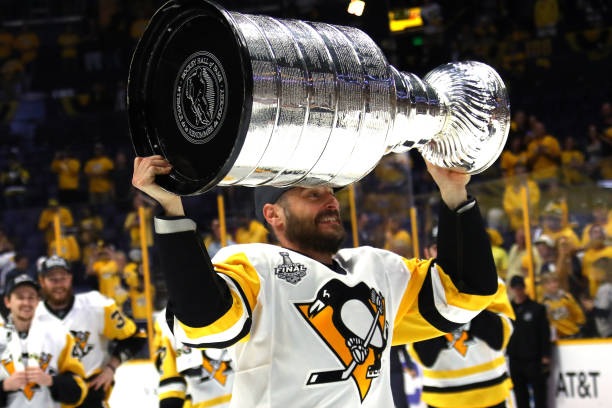 Sunday evening, the Pittsburgh Penguins won their second consecutive Stanley Cup, making them the first team in the salary cap era to do so. The Penguins edged the Nashville Predators 2-0 in Nashville in Game 6 to take the Cup, with the two goals coming from Patric Hornqvist and Carl Hagelin. While this Stanley Cup victory is important and obviously special to each member of the Pittsburgh Penguins, there are two players that really stand out when it comes to just how special this Stanley Cup win really was.

In 14 seasons and 907 career games, defenseman Ron Hainsey has never before played in a Stanley Cup Playoff game. It is hard to imagine a player going that long without seeing postseason contention, but unfortunately for some, it happens. However, at the trade deadline in February of this year, Hainsey was traded by the Carolina Hurricanes to the Penguins. Pittsburgh was looking for a veteran defenseman to help fill in their injury-riddled defensive corps. Hainsey embraced the move, his first game being in the Penguins vs. Philadelphia Flyers Stadium Series game at Heinz Field. From there, Hainsey would secure a spot in the Penguins defensive pairings, and for the next three months, would help secure a playoff spot. Come April, Hainsey would skate in his first ever career Stanley Cup Playoff game against the Columbus Blue Jackets.

After 14 years in the @NHL, Ron Hainsey will finally get his day with the #StanleyCup. pic.twitter.com/vMwqSihoI8

Hainsey would stick along and stay healthy the entire length of the playoffs, progressing from one playoff series to the next, and eventually to the Stanley Cup Finals. And we all know how this ended- with Penguins captain Sidney Crosby handing the Cup over to Ron Hainsey- a wonderful moment indeed. “It’s just a huge honor, obviously,” Hainsey said in an interview with NHL.com. “I was kind of lobbying for ‘Cully’ [Matt Cullen] if it’s his last game, which I think it is. Or Kunitz [Chris Kunitz]. It’s obviously just a tremendous honor. I don’t really know what to say. It felt great. It was unexpected, we won so late, feel like it all kind of went by in a blur the last couple of minutes. Certainly moments here the whole night that we’ll never forget.” (Via Yahoo Sports)

“A guy who has played as long as he has to not even get a playoff game tells you what it’s like to win,” Sidney Crosby said regarding Hainsey. “I think it was just special to be able to pass it to him, somebody who has probably been through so much, played a long time and can appreciate it as much as he can. I’m sure he was pretty happy to lift it and I was certainly happy to pass it along to him.” (NHL.com)

Another player whom this Cup win was very special for was veteran forward Matt Cullen. Cullen, who turned 40 last November, has likely just finished his final NHL season. He has hinted about calling it a career, but has yet to officially announce it, but many fans and players speculate this might be it, to go out on such a high note. After Hainsey had his skate with the Stanley Cup, he passed it off to Matt Cullen, who took it around the ice, embracing the sacred moment, one that may be his last. Cullen had multiple family members and friends at the game watching; watching him win the greatest trophy in all of sports yet again. Cullen is capping off a career that spanned 20 seasons, 1,366 games, and three Stanley Cups.

Was this the final time Matt Cullen will lift the Cup as a player? If so, he went out with a BANG! #StanleyCup pic.twitter.com/X0eUResOMd

“I love the game and I thank God every day for the opportunity to play in this league for so long,” Cullen said (Via Yahoo Sports). “It’s a blessing. I just consider myself really blessed to be here. It’s what it’s all about. I just can’t believe that it worked out this way. But I’m so appreciative. It’s such a humbling experience to be real honest with you. I never expected to have this opportunity and to have it work out like this. I’m really thankful to everybody. It’s just nice to be a part of this.”

Matt Cullen has skated in 1,366 NHL regular-season games, scoring a total of 248 goals and 441 helpers. He has played for the Anaheim Ducks, Florida Panthers, New York Rangers, Carolina Hurricanes, Ottawa Senators, Minnesota Wild, Nashville Predators, and the Pittsburgh Penguins. In 123 postseason match-ups, Cullen has scored 18 goals and has added 38 assists.

via Last Word on Hockey, by Noah Cirisoli