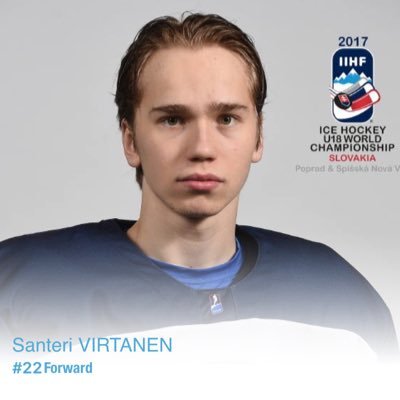 Where scouts likely got their best look at him, and where we certainly did, was in his performances on the international stage. He was part of Finland’s team at last summer’s Ivan Hlinka tournament. While he only had one goal and two points in four games, he had a very strong tournament. He followed that up with another strong performance at the IIHF Under 18s, with two goals and six points in seven games. It was enough to bring home a silver medal. Santeri was also part of Finland’s Under 17 squad at the 2015-16 World Hockey Challenge.

Virtanen’s skating is a bit of a work in progress. His first step, and his acceleration are clunky and really need a lot of work. Once he gets moving, he does well, and can keep up with the play. His agility and edge work also need to be improved going forward. One area that Virtanen does well is with his lower body strength. He is strong on the puck, and has the power to fight through checks. Virtanen also battles hard in the corners, and in front of the net. He is able to establish position and tough to knock around.

Santeri Virtanen plays a power forward style of game. He is good at getting to the front of net, both with and without the puck. When he gets the puck in close, he has the soft hands to finish in tight to the net. Without the puck, he establishes position, screens goaltenders and generally causes havoc. He can tip in pucks, and also pounce on rebounds. Virtanen also has a good wrist shot that he can fire from further out. It is heavy and has good accuracy, as well as featuring a quick release.

Virtanen can also play the roll of play maker. He has good stick handling ability and can protect the puck in traffic and on the cycle. Virtanen also has the vision to find open teammates, as well as the passing ability to fit the puck through tight spaces. There is some creativity there at times, even if his preferred method of attack is to go to the net.

Virtanen is a decent defensive player. He is strong in the face-off circle and has good positioning in his own zone. He uses an active stick to cut down passing lanes and cut down turnovers. Virtanen also has very good positioning, and is willing to put his body on the line to block shots. He works hard in his own end, supporting the defence down low, and back checking hard. Virtanen has been a key penalty killer for Finland’s junior teams. When he does create a turnover, he transitions to offense quickly.

Santeri Virtanen could be a real diamond in the rough for the team that drafts him. The lack of playing time this year may have him flying under the radar. A team will need to be patient, as making up a lost year of development, will take Virtanen time. He could be a solid second or third line centre, that can play in all situations. His game is reminiscent of Jori Lehtera of the St. Louis Blues.