(Editorial) – The LA Galaxy only won two road games in league play in 2015 and took just 12 points from their 17 road games. They are 1-1-1 on the road this season already. They got their first road win in dominating fashion Friday night, beating the Houston Dynamo 4-1.

As crucial as the result was, how they got it was more important. The Galaxy have been ravaged by injuries. Captain Robbie Keane will be out for several more weeks due to knee surgery. Dan Kennedy is just now returning after getting hurt in the MLS opener. Jeff Larentowicz and Leonardo are on the mend from preseason injuries, but have yet to appear. Robbie Rogers got hurt in a game against the Portland Timbers.

Giovani dos Santos made his second consecutive start since getting injured last month. He went the full 90 minutes and scored a brace, including this beauty. Steven Gerrard made his return to the Starting XI as well and had maybe his best game of the season. He and Baggio Husidic weren’t bad together. Let’s break this all down.

Gio isn’t back yet, but he is certainly alive.

Dos Santos started in a No. 10 role in a 4-2-3-1. Gyasi Zardes started as the lone striker. Dos Santos and Zardes didn’t have that much link up play, but they both had good individual moments.

Dos Santos’s first goal came in the 4th minute. Ashley Cole lobbed a long ball to the top of the box from the other side of the field. Sebastian Lletget and the two Dynamo center backs all went up for the ball and the resulting deflection left Dos Santos in alone on goal. The 26-year-old let the ball settle and blasted it past goalkeeper Joe Willis. Dos Santos didn’t do anything special on the play, but considering how inconsistent he’s been since joining LA last summer, it was nice just to see him finish a play off. He did something positive for his team, something he hasn’t done yet in 2016.

Later in the half, Dos Santos created a goal and scored again. In the 21st minute, Gerrard intercepted the ball in midfield and found a streaking Dos Santos with a through ball. Dos Santos chipped it towards goal and Husidic cleaned up the rebound to give the Galaxy a 2-1 lead. The Mexican International got his brace 10 minutes later. Gerrard again found him on a long ball to the box. Dos Santos took a touch to control the ball and half-volleyed it inside the far corner of the post.

In the past, we’ve seen Dos Santos kill the tempo and ultimately squander good offensive situations for this team. On the Husidic goal, he made a quick decision and executed it well. He created a dangerous chance that led to a goal. On his second goal, he again made a good run, controlled the ball well, and made a great individual play. We haven’t seen this all year.

In three separate moments during this game he finished a chance he should have, made a play to set up a teammate, and made a great individual effort indicative of a big name Designated Player. Dos Santos’s brace had to boost for his confidence.

That said, Dos Santos still hasn’t put together a full 90 minute performance. He has yet to combine well with Zardes. He and Lletget did have a few good moments. Dos Santos showed he can be a great individual, but he still needs to work on being a maestro who gets others involved.

Also, I still have no idea how he fits into the Starting XI once Keane is healthy. But for the moment, he’s making plays and filling in for Keane.

Gerrard and Husidic weren’t bad together. Gerrard got forward and made things happen offensively.

In a previous article, I broke down Gerrard’s play early on in the season. In short, he’s had some good moments and some bad moments but wasn’t getting forward enough. He wasn’t creating enough chances from the run of play. The distribution wasn’t good enough.

The Englishman got forward in this game. He assisted on a goal and set up Dos Santos to help create the second goal. Here’s a heat map of the two for the game, Gerrard on the right, Husidic on the left: 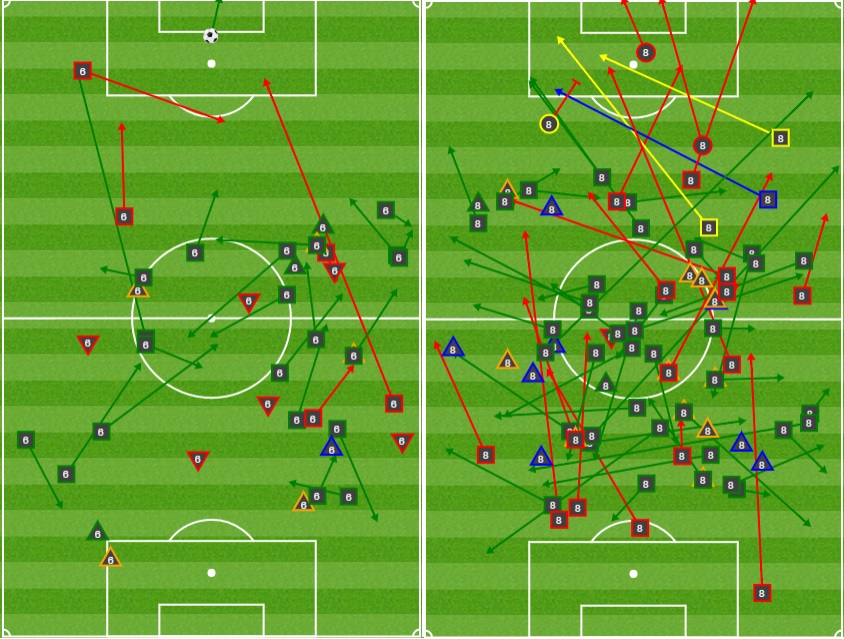 Husidic did not get as many touches, but appeared comfortable as the off ball central midfielder. We see Gerrard get forward and be active in both halves of the field. He distributed the ball to the wings a lot more. In the 4-2-3-1, Gerrard had three midfielders in front of him, rather than just two forwards in the Galaxy’s standard 4-4-2. With this switch, Gerrard’s responsibilities changed.

He’s expected to distribute more and get forward less, a David Beckham role of sorts. This seemed to fit him better. He didn’t have to run as much. He also didn’t take any corners and only a few free kicks, so those actions in the final third are mostly from the run of play, unlike the Colorado game. He didn’t need to expend as much energy covering ground, but was still given the responsibility and chance to make plays. He executed. Houston’s Alex and Ricardo Clark didn’t exactly put pressure on him or make him work, but this was very encouraging.

Husidic played second fiddle to Gerrard, but similarly contributed on both sides of the ball. He also got the ball out wide to help push the temp and create offense. Husidic picked his times to go forward well, as he showed on his goal. Once Nigel de Jong returns from suspension, I’d expect Husidic to return to the bench. That said, the Bosnian will continue to be a midfield Renaissance Man for Bruce Arena. He can play any role, any position, in any formation.

It looks like he’ll be able to fill in well for De Jong in the immediate future.