(Editorial) – The LA Galaxy are having an underwhelming start to the 2016 season. They crashed out of CONCACAF Champions League with a 4-0 loss at Santos Laguna. They did pull off a great comeback win over D.C. United, but followed that up with a lackluster loss to the Colorado Rapids on Saturday.

The performances have been a bit uninspiring as well. An older roster already has some injuries at important positions. There’s still some major issues at forward, yet head coach Bruce Arena appears content to trot out Robbie Keane with Giovani dos Santos despite their lack of chemistry. But there’s another concern.

LA Galaxy Midfield: Stuck with Gerrard for Better and Worse

For all the depth the Galaxy have, there’s no clear back up for midfielder Steven Gerrard. Stevie G’s had some good moments in MLS. He’s had some bad moments. But with the current roster, the LA Galaxy midfield is doesn’t have any great alternatives. They’ll have to take the good with the bad. This team is pretty much stuck with Gerrard as the starting central attacking midfielder. Let’s break this down.

Gerrard has been good and bad:

The 35-year-old Englishman started his LA Galaxy career with a bang, getting a goal and an assist in a 5-2 California Clásico victory over the San Jose Earthquakes. Gerrard got just one goal and two assists in the remaining 12 games of the season. This isn’t entirely his fault though. Just weeks before his debut, rumors begin to swirl about Dos Santos signing with the Galaxy. He ultimately did.

We’ve seen midseason DPs change and mess up chemistry for MLS teams before. Two midseason DP signings compound that even further. But both they and their team usually bounce back the following year. So far the Galaxy are still figuring things out and so is Gerrard.

Here’s a heatmap of Gerrard’s first two games of the MLS season (courtesy of Squawka.com). The match against D.C. is on the right; the match against Colorado is on the left. In both cases, the Galaxy are defending the bottom goal. 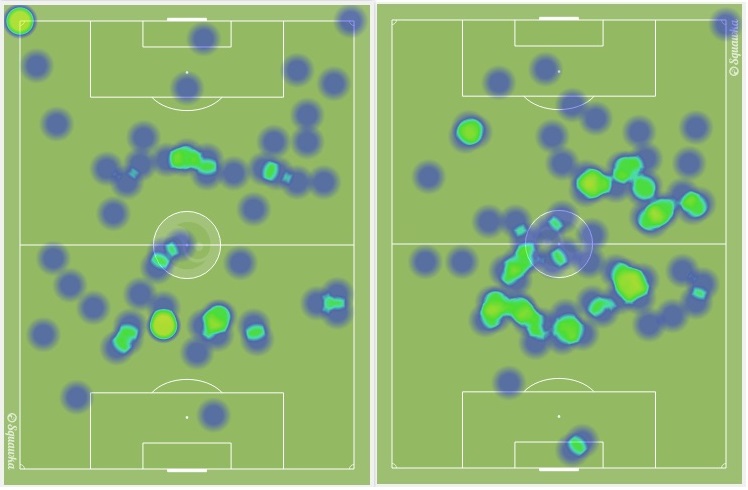 Without context, this looks like a box-to-box midfielder’s heat map. There’s some dense spots in the defensive half of the field. We also see some spots on the corners, so the player is taking some set pieces. In the context of Gerrard’s role with the team, this isn’t great. Arena’s 4-4-2 with the ‘Y Midfield’ puts Gerrard in the middle of the Y. This heat map shows that Gerrard isn’t getting as far forward as expected for an attacking mid. From watching the first two games, we know Gerrard is taking some set pieces and corners. So several of those touches in the final third are not from the run of play.

Some of this is Gerrard’s fault. Some of it isn’t. The forward situation is still a mess. It’s hard to go forward with confidence as the central attacking midfielder when you don’t know what your strikers are doing. The Galaxy also played that second game at altitude, which is never easy in preseason. Gerrard did create a few chances and went the full 90 minutes in that match, which is encouraging. He’s also getting used to a new midfield partner in Nigel de Jong, who is new to MLS.

Still, most of Gerrard’s actions are in the defensive half. He needs to get involved in the attack. Furthermore, he has only one assist and no goals this season. A world class player should be able to make something happen regardless of what’s going on around him. At age 35, Gerrard isn’t what he was at Liverpool. He’s lost a step. He doesn’t have as many of those spectacular moments in him. The team still needs to a few more games to get their fitness up and (hopefully) figure out their chemistry issues.

I give Gerrard another month to get fit and comfortable because of his age. If he hasn’t improved by then, that means he’s probably plateaued and this is what he could be for the rest of the season.

The bench options aren’t that great:

The Galaxy have De Jong, Rafael Garcia, Baggio Husidic, and Jeff Larentowicz as their other central midfielders. De Jong and Lartentowicz are both defensive midfielders by nature. So is Garcia. That leaves Husidic as the only other player who’s a box-to-box midfielder.

While I think Husidic can be a starting caliber player, I’m not sure he can  do it for 30 games at 90 minutes a game. He’s also capable of playing all four midfield positions, so he’s more valuable to Arena as the first substitute off the bench. Like a utility knife, he’s versatile and can come in and fill whatever role is needed based on how the game is going. If Gerrard is struggling come May, I’d give Husidic a chance at that starting position.

Husidic won’t bring as much offensive creativity, but he’ll be more solid defensively. Gerrard certainly has a more powerful shot and cross. Husidic is an inch taller than Gerrard but isn’t as broad. Because he’s only 28-years-old, he’s probably more durable.

The Galaxy do have several academy kids who fit the mold of a central attacking midfielder. There’s Bradford Jamieson IV and Raul Mendiola. To a lesser extent there’s Ariel Lassiter (certainly more of an underneath striker than a No. 10). The thing is the Galaxy are in win now mode and Arena loves his veterans. He’s been very hesitant to play his kids, unlike most of MLS. This is a concern. Still, I’m not sure any of the kids would be remotely ready to take on that task. For a team rebuilding, it would be fine. Not for the league’s powerhouses. Not for a team expected to compete for trophies.

Embed from Getty Images
(Comments, if enabled, are below this video.)


Warning: Use of undefined constant TDC_PATH_LEGACY - assumed 'TDC_PATH_LEGACY' (this will throw an Error in a future version of PHP) in /data/www/ms.lastwordonsports.com/wp-content/plugins/td-composer/td-composer.php on line 107